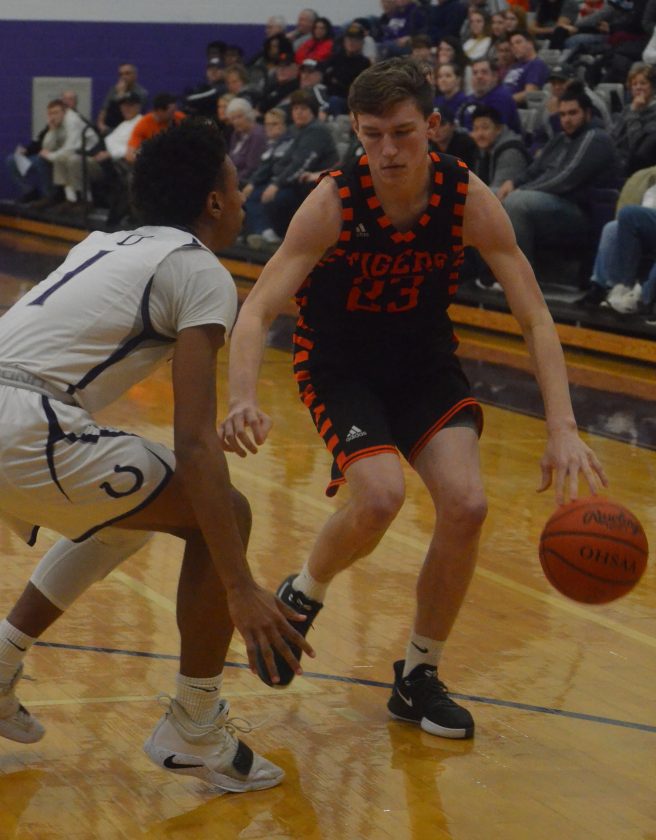 T-L Photo/RICK THORP Shadyside’s Kelly Hendershot (23) dribbles against Martins Ferry’s Jaizen Miles (1) during their game Saturday night inside the Tolbert Gymnasium. Hendershot scored a game-high 19 points as the Tigers raced to a 59-37 victory.

MARTINS FERRY — After watching Logan Smith record a 3-point play to end the first half Saturday night and almost getting one to begin the second, Ed Andes had seen enough.

“I was just reassuring the guys to not let them in the lane,” said Andes, Shadyside’s veteran head coach on why he called a quick 30-second timeout early in the third. “He got in the lane too easy.”

Smith was dominant when Martins Ferry visited Shadyside two weeks ago. He scored 24 points and grabbed nine boards as the Purple Riders dominated the inside in a 55-49 victory.

Martins Ferry was unable to duplicate that success Saturday night as the Tigers (10-4) used four double-digit scorers and a strong defensive effort as catalysts in 59-37 triumph inside Tolbert Gymnasium.

“Defensively, we played a lot better than that first game,” Andes said after his team went 2-for-2 this weekend. “We were trying to keep them out of the lane because they’re very strong. That’s what they wanted to do.”

Smith finished with 17 points this time, but no one else was able to get on track for the Purple Riders (7-8) who dropped under .500 after falling for the second time at home in as many nights. Martins Ferry mustered just 27 points in a loss to Wheeling Park on Friday.

“We’re struggling right now,” Purple Riders head coach Derek Edwards said. “This is the second night in a row where we shot in the 20s (percent) from the field. And we’re at home.

“We had four guys (score) in double figures, and that was our goal,” said Andes, who also watched Bryce Amos (13) and Tyler Parr (10) reach the plateau. “The last time we played, I think we had two.”

The Tigers jumped out to an 11-4 lead after one and stretched it to 20-10 midway through the period. Ferry never threatened and, once Shadyside went on its big run early in the third was out of it for good.

“We were 1 of 11 from 3 and 6 of 14 from the line,” Edwards surmised. “Shooting like that will get you in trouble against a team that scores.”

And, as the game continued, Shadyside seemed to improve offensively. The Tigers outscored the Purple Riders 33-18 in the second half and led by as many as 20 in the fourth.

“Plus, our subs came in and gave us good minutes,” Andes noted. “Everyone contributed. That was great.”

HANNIBAL — To go far in the postseason, Zach Delman knows his team’s defense needs to be purring like a ...