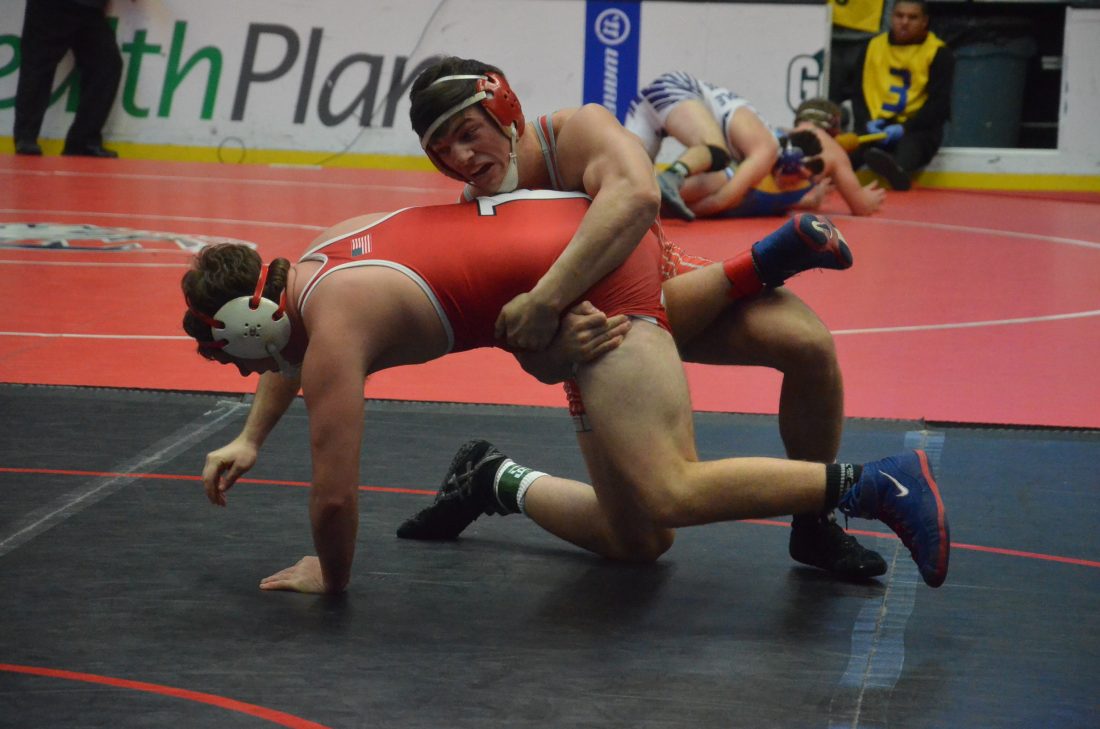 WHEELING — It was an unofficial Patriots Day Friday inside WesBanco Arena as both Parkersburg South and Wheeling Park have made the 67th annual OVAC Ron Mauck wrestling tournament a two-team race. The Wood County Patriots hold a slim, 157-151, edge over the Ohio County Patriots.

If that wasn’t close enough, both talent-ladened squads will have eight entrants in today’s semifinals, which begin at 11 a.m. They go head-to-head twice at 120 and 220.

“I told the kids when we were warming up that this was a big round. This was definitely a make-or-break round,” Parkersburg South head coach Shaun Smith said. “They really stepped up in the championship bracket. I’m proud of them right now. They just can’t let up.”

Wheeling Park’s Brian Leggett couldn’t have been any prouder of the way his team competed.

“We wrestled to the top of our potential. I told the guys that if everyone of them came out and did their job, we’d be in a good place,” he said. “I’m happy with the way they wrestled and their performance. Hopefully, we can keep that momentum rolling into the semifinals.

“That’s the exact same way their match played out in our dual,” Leggett said of Shelek’s nod over Muldrew. “Andrew was just tougher there and gritted it out.”

Leggett said he was pleased with how junior Stevie Mitchell (145) and freshman Erick Brothers, jr. (182) have been wrestling.

“He’s staying on his offense and everything is clicking right now for him,” Leggett said of Mitchell. “Erick is just peaking at the right time and doing all the right things.”

Beaver Local, the defending overall and Class 4A champs, are third overall and tops its division with 133.5. Steubenville (116.5), St. Clairsville (113) and Oak Glen (106) round out the top 6. The Beavers have half-a-dozen semifinalists, including top seeds Logan Ours (132), Cole McComas (138), Logan Krulik (170) and Daniel Wirth (285), along with Mark Emmerling Jr. (120) and Skyler Lasure (160). Ours is a defending champion, while McComas, a Rider University recruit, is a two-time champion and three-time finalist, as well as being a three-time Ohio Division II state runnerup.

Steubenville has a trio of semifinalists in top seeds Ethan Pappas (160), David Tuttle (182) and Keith Bodnar (195). All three are returning placers.

“We’ve been working for this. We scheduled a tough schedule to prepare us this,” he noted. “We told the kids if they go out and wrestle like they are capable of they can succeed.”

Chad Ware couldn’t be any happier for his senior Richard McFarland (195).

“We’ve been telling Richie that we know he can do it if he puts his mind to it. He’s capable of winning this thing,” Martins Ferry head coach Chad Ware said after his fourth-seeded senior pinned Southern Local’s No. 5 Sam Lowe to reach the semis. “He started off a little slow by allowing the takedown, but he came on and finished strong.”

The top four seeds in eight weight classes advanced to the semifinals. One had to work overtime, that being John Marshall sophomore Carl Cochran (113) who outlasted Brooke’s Danny Yost, 5-0, in sudden-victory.

Barnesville leads Class 3A and has a semifinalist in sophomore Griffen Stephen (113). Shenandoah tops the 1A/3A field.

The Parade of Champions begins at 3:30 today, with the championship finals set for 4.