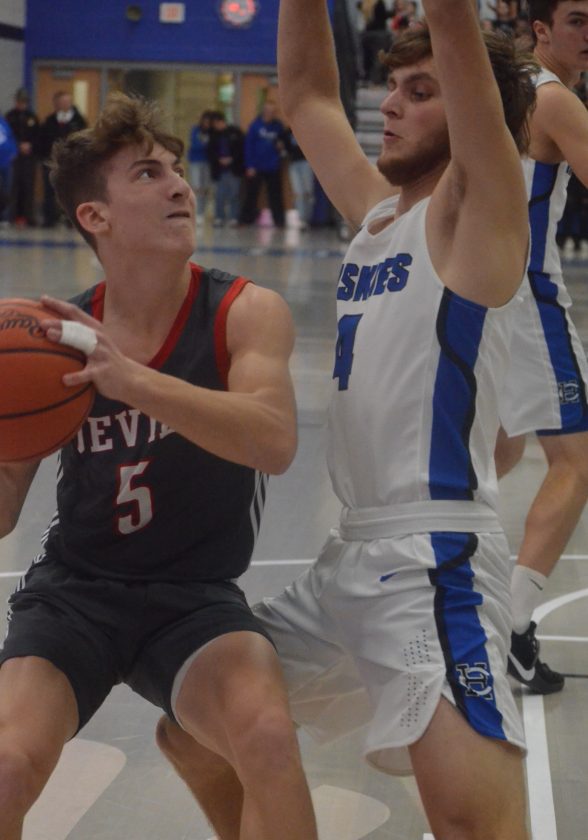 CADIZ — After dropping three straight, St. Clairsville head coach Ryan Clifford admitted a trip to Harrison Central and a showdown against the Huskies and talented Kobe Mitchell wasn’t exactly the best place to look to get healthy.

But the Red Devils overcame a sluggish start, and a sensational first half by the junior, to prevail 59-50 Tuesday night and regain a little bit of mojo as the second haklf of the boys’ high school basketball season tips into high gear.

“We really needed a win,” Clifford smiled followed the Buckeye 8 triumph. “But, that’s a credit to our kids. We don’t lose three in a row very often and it tested us in every phase of our lives.

“It’s tough to go to school when you lose three in a row. But, you know, in those three games, we missed shots that we usually make. It was a bad week.

“But, we made them (Tuesday), and we found a way to stop (Mitchell) just enough.”

Mitchell torched the nets for a game-high 35 points, including 26 of his team’s 28 in the first half. But St.C. countered with a balanced effort, with Brett Vike, Will Balgo and Nate Harris all scoring 15.

“That’s the way it was up until about a week ago,” Clifford said of his team’s scoring parity. “We moved the ball well and we passed up good shots to get great shots. That’s what our goal is.”

The Red Devils (8-4) continued to look sluggish early in the opening quarter, while Mitchell carried the Huskies (6-6) to an early lead.

But as the first-quarter clock wound down, St. Clairsville warmed up. The Red Devils’ scoring trio joined forces to put St. C. up one at quarter’s end and by five — 20-14 — early in the second. Clifford said the surge came simply as a result of making shots.

“A couple went in,” he said. “Our confidence wasn’t good before, but to see the ball go in the basket a few times it freed us up to play like ourselves and we moved the ball, shared it and got good shots.”

Most of the shots the Red Devils made were layups in transition or buckets in the paint.

“Our bigs did an outstanding job of rebounding, and they did an excellent job of outletting the ball when we got out in transition,” Clifford said. “That looked like the team we were for the first month-and-a-half.”

St. Clairsville went up by as many as eight in the second, but Harrison Central hung around thanks to Mitchell, who was doing everything inside and outside to keep his team in it. He scored all 16 of the Huskies’ points in the period as the hosts pulled to within two at the break.

“That first-half performance was as impressive as I’ve seen, and we were still winning,” Clifford said.

The Red Devils scored five straight points top open the third, what ended up being a 17-6 win in the scorebook for St. C. The Huskies only registered two field goals in the quarter and Mitchell was limited to two points. A 7-0 run to end the period put St. C up 13 heading to the fourth.

“We didn’t give it a good enough effort to win,” Harrison Central head coach Justin Clifford said. “And when you don’t do that, the ball isn’t going to go in.

“(In the third), they beat us up and down the floor and they made some effort plays and we didn’t get any of them. Two or three here and there and that’s six or eight points and that’s the difference in the game.”