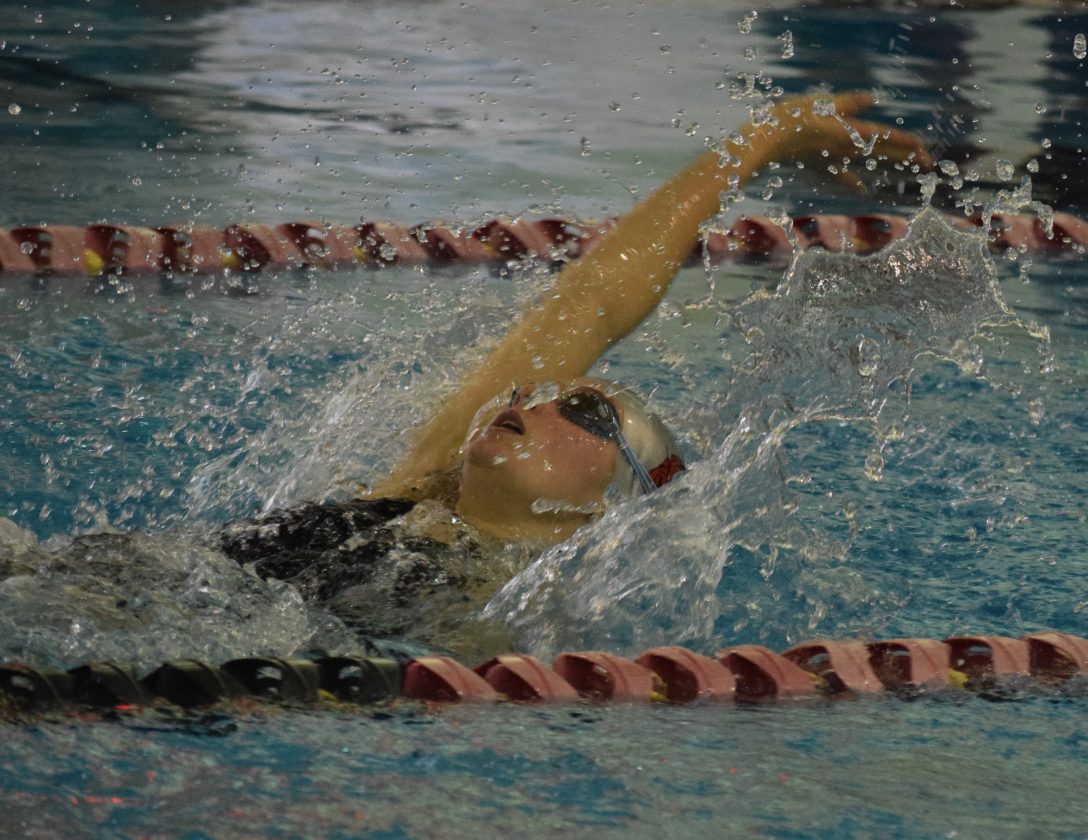 It could be a scary scene for other teams when the St. Clairsville squads swim fresh.

The Red Devils cruised to both the boys and girls titles inside the Alma Grace McDonough Center on the campus of Wheeling University, winning both the Buckeye 8 and invitational titles in the process.

“From the top of the team to the bottom, all of the kids swam really well,” Banks said. “We have some high-yardage and high-intensity practices going on right now, so to be able to swim the times we did (Saturday) tired is impressive. We’ll swim (the OVAC) tired, too, but I like where these kids are coming up toward the end of the season.”

The St. Clairsville girls — quite simply — put on a clinic for the rest of the field, accumulating 120 points, which was 67 better than runner-up Beaver Local.

The Red Devils did it with quality and depth and probably more of the former. A quartet of junior Maggie Marody, sophomore Casadie DiBetta, sophomore Kylie McKeegan and sophomore Brenna Planey had a hand in all 12 event victories.

“I can’t say enough about those girls,” Banks said. “They’re our leaders and they delivered. They never fail to give it their all and it shows. A lot of the newer swimmers feed off of them because they had times beyond what they’ve ever dreamed of.”

Marody, who is a multiple-time state qualifier, got things rolling, individually, for the Red Devils when she touched the wall in 2:02.47 to win the 200 free by some 19 seconds.

Next up, was DiBetta. The defending 100 breaststroke state runnerup claimed the 200 individual medley with a time of 2:16.94, which was 11 seconds better than her nearest competitor.

Planey — the freestyle sprinter of the foursome — was next to claim a gold. She captured the 50 free in 26.46.

The second wave of individual events was jumpstarted by Planey, who breezed to victory by upwards of five seconds in the 100 free with a 57.54.

Marody — the long-distance ace of the squad — won the 500 freestyle by more than a minute. The 5:21.06 she posted would have also won the boys race by more than a second.

McKeegan’s second victory came in the 100 backstroke by virtue of a 1:04.17, which was eight seconds better than the silver medalist.

DiBetta had no issues in winning her aforementioned specialty, the 100 breaststroke, when she lapped the field for a 1:05.90, which was more than 13 seconds better than the runnerup.

In the relays, St. Clairsville utilized a team of Olivia Moyer, DiBetta, McKeegan and Planey to post a 1:56.07 to cruise to victory by 15 seconds in the 200 medley relay.

The 200 free team included Paige Koshenko, Ellie Thomas, Taya Rocchi and Marody and it posted a 1:55.19 for the victory.

And the Red Devils put the finishing touches on their impressive day when the squad of Marody, Planey, DiBetta and McKeegan lapped the entire field en route to a 3:51.91 in the 400 free relay.

The Red Devils’ boys team features just eight competitors, but it’s a quality bunch, which was further proven by the fact that it won all but three events en route to 111 points. That score was 56 better than runner-up Martins Ferry, which claimed the other three events.

“Our boys are all about the numbers,” Banks said. “All eight are fast swimmers and hard workers, who give it their all. Individually, all eight are really good. They’re small and mighty. We’ve built our boys around Ethan Banks, Matt Marling and Nate Yost.”

All three of those cogs delivered for the Red Devils, who have now won six consecutive league titles.

Yost was also a double individual winner for the Red Devils. He won the 100 fly in 58.57 and also touched in 59.78 to edge out Marling for the 100 backstroke by 18 hundredths of a second.

Marling, however, got an individual crown in the 50 free in a solid 23.82 clocking.

St. Clairsville’s other individual win came via Caleb McKeegan, who won the 200 individual medley in 2:17.15.

The Red Devils set the tone when the foursome of Banks, Jack Gasber, Yost and Marling posted a 1:49.56 to win the 200 medley relay.

With the Caleb McKeegan stepping in for Gasber and the other three legs remaining the same, St. C. notched the victory in the 200 free relay in 1:39.68.

Martins Ferry senior standout Jarrett Bolinger cruised to victories in his two specialties. He won the 100 free in 51.42 and then pocketed the 100 breast in 1:05.69.

The Purple Riders 400 free relay team of Matt Collette, Tristen Blatt, Wyatt Wodarcyk and Bolinger posted a 3:50.96 for the victory in the 400 free relay.