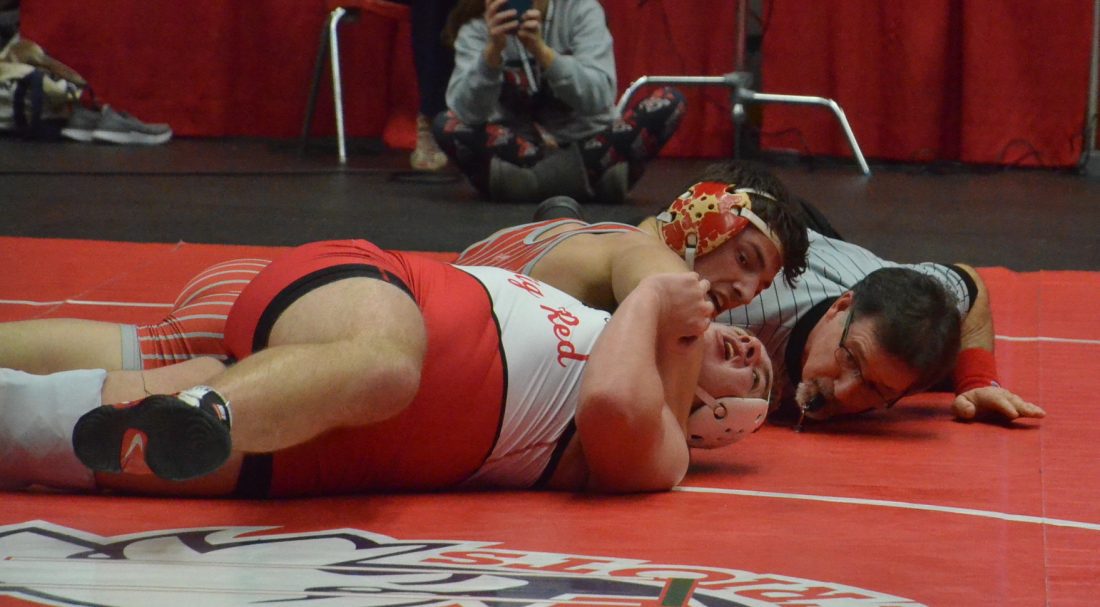 WHEELING — There was elation. There was tears. There was history, both team-wise and individually, and there was some memories made that will last forever.

The championship finals of the 67th edition of the annual OVAC Ron Mauck wrestling tournament had them all Saturday as its three-day stay inside WesBanco Arena came to an end with 14 individuals standing tall high atop the awards podium.

For Shelek, winning his title fulfilled a childhood dream.

“I’ve been dreaming about this my entire life. What a crazy experience this weekend has been,” the Patriots fourth-seeded senior said after defeating St. Clairsville’s Caden Stout, who was seeded sixth, by a 13-6 count.

“This was the hardest weight class in the OVAC Tournament. It’s all about heart and what you have in here,” he said while pounding on his chest. “That’s why I’m the OVAC champion at my weight.”

Shelek said there was a little more pressure applied to him when his younger brother, Nate, was pinned earlier in the 120-pound finals.

“It was tough to see him lose like that, but part of this is for him,” he said of his title.

Wheeling Park head coach Brian Leggett was proud of both of his titlists.

“It’s no secret that Andrew hit a slump there last month. He wrestled his way out of it with grit and determination. He got back into the (wrestling) room and worked his butt of to get back where he is,” Leggett noted. “That shows a lot about his character. We knew he was capable of knocking off all the kids he did here. Proving it means a lot to him.”

To earn his title, Shelek defeated the No. 5 (Steubenville’s Tyler Muldrew), the No.1 (Cole McComas) who was a two-time champion and the No. 6 (Stout).

Taggart, the third seed, executed a 4-point move in the waning seconds of the first period and held on for a 5-1 victory over Parkersburg South’s Nathan Ford, the fourth seed.

“Cody wrestled a really good tournament,” Leggett noted. “He came out strong every match and did what he was supposed to.”

“We didn’t quite reach our ultimate goal, but we wrestled to our full potential,” the Patriots second-year coach said. “We’re improving every time we step out on that mat. I couldn’t be any prouder of these guys.”

Bush, the No. 2 seed, secured the Dragons first title since David Schleiper prevailed back in 2011 when he posted 5-2 decision over Beaver Local’s top-seeded Logan Krulik.

“It’s awesome,” Bush, now an impressive 31-0 as a sophomore, said of being an OVAC champion. “There’s a lot of hard work that goes into it.”

St. Clairsville capped a good weekend with a pair of titlists.

Skaggs, the No. 2 seed, turned the tables on Steubenville’s No. 1 seed Keith Bodnar. Pushing the issue early, the Red Devils junior led 4-1 after one period and was up 5-1 in the second before earning his championship with a pin in 3:53. It was Skaggs’ fifth fall of the tournament.

“It’s an awesome feeling. My grandparents couldn’t be here tonight, so I was a little motivated to get it done on TV for them,” Skaggs admitted. “It was a good weekend for me.”

Kish, the top seed, was never threatened in the tournament as he posted a 6-0 shutout of University’s Jace Stockett, who was seeded third. Prior to that, he had pinned his first four foes in less than two minutes.

“It feels good to attain one of my high school goals. Since I’ve been a freshman I’ve wanted to be on top, but I always fell short. Tonight I wasn’t going to let that happen,” Kish said after moving his record to 21-2.

“They’re a tough team … a premiere team,” St. Clairsville head coach Joel Sansone said of Beaver Local, who won the Class 4A crown, 209-171, over the runnerup Red Devils. “I’m very proud of the way our guys wrestled this weekend. Win or lose they went out and battled.

“We had a really good semifinal round when we set a school record with four finalists out of four in the semis,” he added. “The kids have bought into what we’ve been preaching to them and it’s paying off.

“Reese pinned his way through the tournament. He’s gaining confidence every day. Koen just goes out does what is expected of him,” Sansone said of Skaggs and Kish.”

Big Red’s Pappas and Tuttle took care of business as the top seeds.

Pappas started the championship round with a pin of Beaver Local’s Skyler Lasure in 4:33. Tuttle followed, two matches, later with a 4-2 nod over Southern Local’s Hunter Morris.

Barnesville defended its Class 3A team championship with 98 points, which was nearly 40 better than Magnolia (58.5).

“Winning the (Class) 3A is a big deal,” Barnesville head coach Jayson Stephen said. “I don’t go into the tournament looking for stuff like that. I focus on the individuals. We’ve got four placers this year. That’s more than we’ve had for awhile.”

Beaver Local head coach Jonny McComas said he was pleased with his team’s effort despite not being able to defend its overall title.

“This sport is all about adversity and ups-and-downs. For the most part, this tournament didn’t go the way we thought it would, but we are stepping out of here with some champions, some good wins and some things we can improve upon,” he said.

“We’re excited for Logan. He had to take a little time off to come back and win this tournament,” the Beavers coach added. “That’s big for him mentally in moving forward to compete for a state title down the road.”

“This tournament has been great to me. This title means a little more than the other two because it allows me to end my OVAC career on top, especially against a world-ranked wrestler like Brayden,” Hall allowed.

Not only are the two standouts both headed to West Virginia University to continue their academic and athletic careers, they will also room together.

“We talked before the match and decided that whoever won would get first choice on beds,” Hall said with a slight smile.

Parkersburg South got back on top of the tournament after a runnerup finish last winter. The Wood County Patriots held off Wheeling Park, 251-236. Beaver Local was third, Steubenville (178.5) fourth and St. Clairsville (171) fifth.

“Obviously, I am very proud of the kids and the team. They really stepped up this weekend,” Parkersburg South head coach Shaun Smith praised. “It was a long, tough battle but they grinded it out and I can’t say enough about how proud I am of them.”

South’s Amos was named the Bierkortte Award winner and also took home the Hercules Award for most pins in the least amount of time. he had five in 4:31.

East Liverpool’s Howard Williams saw his bid for a third title fall by the wayside with a 2-0 sudden-victory loss to Ours.