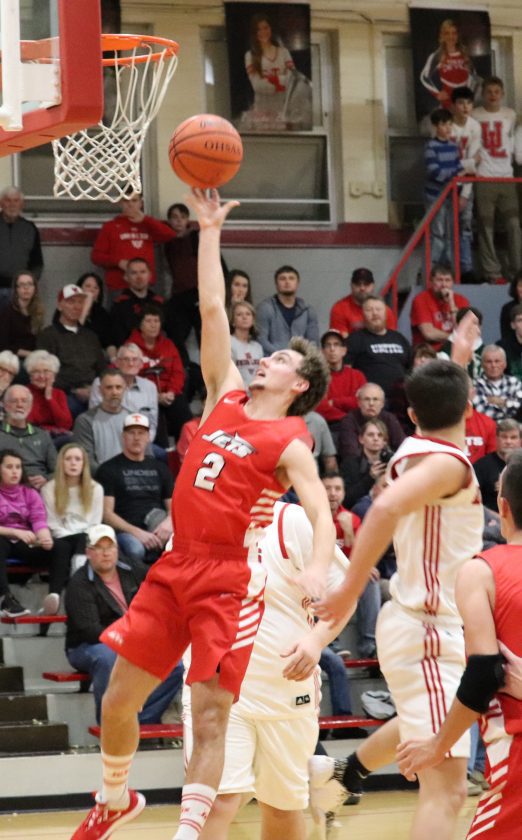 UNION LOCAL’S Hunter McCort goes up for a shot during the second half of Friday’s game at St. Clairsville. The Jets picked up a 69-61 victory.

ST. CLAIRSVILLE – Union Local shot 54 percent from the field and rode a balanced scoring effort to a 69-61 victory against St. Clairsville on Friday at John Jenkins court.

The win avenged an earlier 13-point defeat at home to the Red Devils as the suddenly red-hot Jets (6-4) are in the midst of a five-game win streak.

“We had three guys in double figures and three others with at least seven,” Union Local coach Zach Delman noted. “That’s the kind of balance we are looking for every night as it will make us more difficult to defend. This was just a great team win.”

Zach Batemen led the charge early as the junior canned two of his four treys in the first quarter. St. C. looked to limit the looks Luke Merritt, but the Jets took advantage, with quick passes around the perimeter in search of open looks from the outside or dumps inside off screens for easy baskets.

The Jets took an early 14-6 lead after back-to-back three pointers, forcing St. Clairsville to burn a TO to calm things down.

Senior Brett Vike started to heat up after the TO, hitting two 3-pointers to trim the lead to two. Vike scored 15 of his game-high 20 points in the first half.

Vike’s efforts and the Devils’ defense forcing turnovers allowed the home club to whittle away at the lead, knotting the score at 36-all at the break.

“We talked at the half that they came out on fire and the crowd and the high energy, we knew it would be that type of game,” St. Clairsville head coach Ryan Clifford said of the packed gymnasium and vocal UL cheering section. “But we kept our composure and stayed the course and were able to get back into the game.”

Nate Harris backed Vike with seven of his 15 points by halftime but the Devils collectively went cold in the second half.

Merritt went to work in the third quarter, totaling six of his 13 points, backed by four apiece from Nathan Meyer and Hunter McCort as the visitors won the third 18-12.?Yet again though, St. Clairsville kept clawing its way back, despite shooting an uncharacteristic 27 percent in the second half.

Harris had eight points during the rally and a big 3-pointer from Drew Sefsick capped a 9-2 run that saw St.C. Cut the lead to one at 60-59.

Carter Louse however, ended any thought of a comeback. The Jets junior supplied six of his eight points off the bench in the final minutes going 4-5 from the line down the stretch and scoring five of his team’s final seven points to seal the victory.

“It was pretty down the stretch, but we dug deep and pulled it out,” Delman said. “Loase stepped up big off the bench. He’d been struggling lately and for him to come in and play well, I’m so happy for him”

Meyer paced UL with 14 points. Merritt and Bateman each had 13 and McCort, Loase and Andrew Martin had eight, eight and seven, respectively.

Sefsick finished with 12 as the Red Devils had a trio fo double-digit scorers and Avery Henry was close with nine. But when the big shots needed to be made, Clifford’s team uncharacteristically was unable to connect.

“We didn’t make some shots we usually make and we’re probably not playing with a lot of confidence right now,” Clifford said. “We’re not used to losing three in a row. We showed signs of getting back kto us. We played with energy and were unselfish, but we just didn’t make any shots.”

St. Clairsville started the season 7-1, but its record now sits at 7-4.

Utility shutoffs to resume this month in St. Clairsville