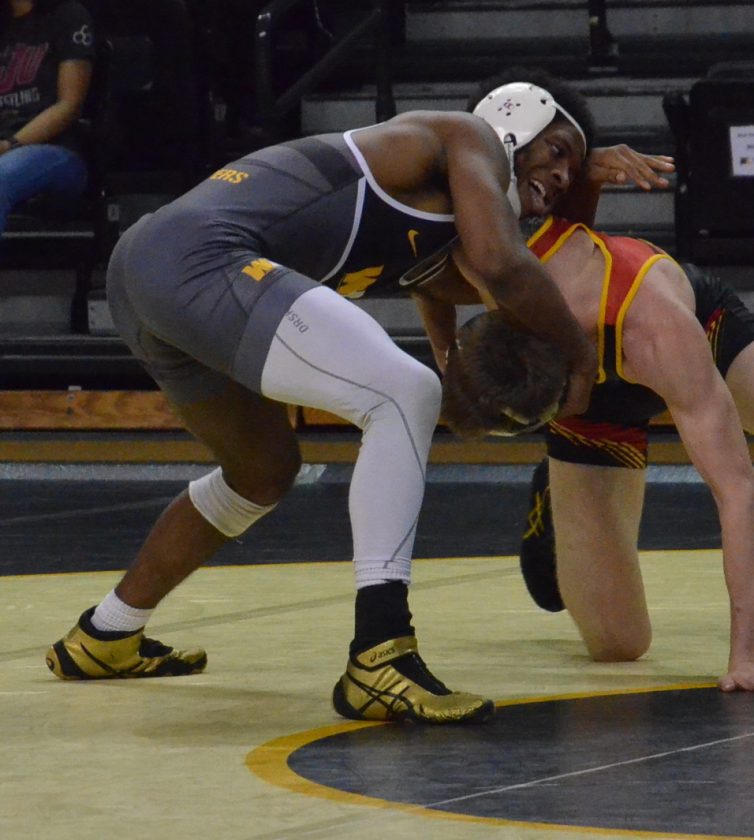 T-L Photo/KIM NORTH WEST LIBERTY’S Darius Bunch, left, has control of Seton Hill’s Joel Cawoski during their 141-pound bout Sunday afternoon inside the ASRC on the Hilltoppers’ campus. Bunch won 14-4 to lift the Hilltoppers to a 22-18 victory.

The West Liberty standout posted a major decision Sunday afternoon that lifted the No. 16 Hilltoppers (9-8) to an exciting, 22-18, decision over visiting Seton Hill (8-5) inside the ASRC in NCAA Division II wrestling action.

“I like the pressure,” Bunch, the No. 3 ranked 141-pounder, said. “I don’t like the fact that it was that close of a dual, but we battled through it and came out on top.”

That score was tied at 18 with one bout left. The stage was set and Bunch didn’t disappoint.

After missing several matches due to injury, the two-time All-American shook off the rust and scored a 14-4 victory over the Griffins’ Joel Cawoski. Bunch was in total control from the start as he led 4-2 after one period. He extended the margin to 7-2 at the end of two periods and coasted from there.

“It’s a bittersweet moment,” Bunch allowed. “I love it up here on the hilltop. The guys accepted me well when I came here. The culture accepted me. I’m going to miss it a lot. I really am.”

Bunch said red-shirting last season prepared him for this year.

“It got me better and made me stronger,” Bunch said of red-shirting last year. He was fourth in the nation at 133 pounds as a junior in 2017-18 after transferring from Emmanuel (Ga.) College where he was an NWCA national champion at the same weight as a freshman and runnerup a year later. “I went up a weight class. These guys are stronger and that has made me that much better.”

Hilltoppers’ head coach Danny Irwin was pleased with how his team bounced back from a loss two days earlier at Baldwin Wallace.

“It was nice to finish the regular season with a win today against a very good Seton Hill team,” Irwin said. “Having it happen on Senior Day makes it even more special.”

He was also proud of how Bunch performed.

“Darius looked like he was back to his old self today,” Irwin noted. “He went out and performed the way we expect him to.”

Starting at 149 pounds, freshman Jacob Simpson provided the Hilltoppers with their first points as he upset No. 11 ranked Austin Shaw by a 11-9 count. The University High product from Morgantown trailed 7-3 entering the final period. However, he executed a reversal that led to back points and a 9-7 lead with 40 seconds remaining. Shaw deadlocked the match at 9 with a reversal of his own, only to see Simpson gain control again four ticks later and hold on.

“Whether the kid was ranked or not, Jacob listened to us (the coaching staff) in a crucial position, making an adjustment that led to that win,” Irwin said. “That’s all about the kids having faith in our coaching staff. We might not be the best coaching staff in the nation, but we certainly not the worst.”

Seton Hill drew even with a decision by Logan McCoy at 157, but West Liberty used a 11-9 decision by Chase Morgan at 165 for a 6-3 edge. The Griffins, however, took a short-lived 9-6 lead on a pin at 174. West Liberty went into halftime with a 12-9 margin thanks to a forfeit at 184 to Huntington product Zane Lanham.

“You feel pretty confident coming down the stretch knowing you have a couple of All-Americans like Cole (Laya) and Darius ready to go,” Irwin allowed.

That confidence was stifled a little when Seton Hill took decisions at 197 and 285 for a 15-12 advantage.

West Liberty pulled even again when Cole Laya, ranked No. 8 in the nation, pinned his opponent, Frankie Bonura, in 4:05 at 125 pounds. Laya, a returning All-American, was leading 11-0 before putting the former Wheeling Jesuit matman in his back.

Vincent Distenfanis drew the Griffins back even with a decision at 133, setting the stage for Bunch’s heroics.

“I like the way we wrestled today. We still have some cleaning up to do as we turn our focus completely toward the (Super Region 3) qualifier in two weeks, but we have things moving in the right direction. We’ll mix in a few days off between now and then to freshen things up so we’ll be ready to execute at the highest level in the regional.”

The NCAA Division II Super Region 3 championships are being hosted by the University of Indianapolis. The one-day regional is scheduled for Feb. 29 with action beginning at 10 a.m. in Nicoson Hall on the UIndy campus. The top three finishers in each weight class will advance to the NCAA Division II nationals, scheduled for March 13-14 in Sioux Falls, S.D.

MORGANTOWN, W.Va. - With the country and state starting to reopen from the COVID-19 pandemic, the West Virginia ...