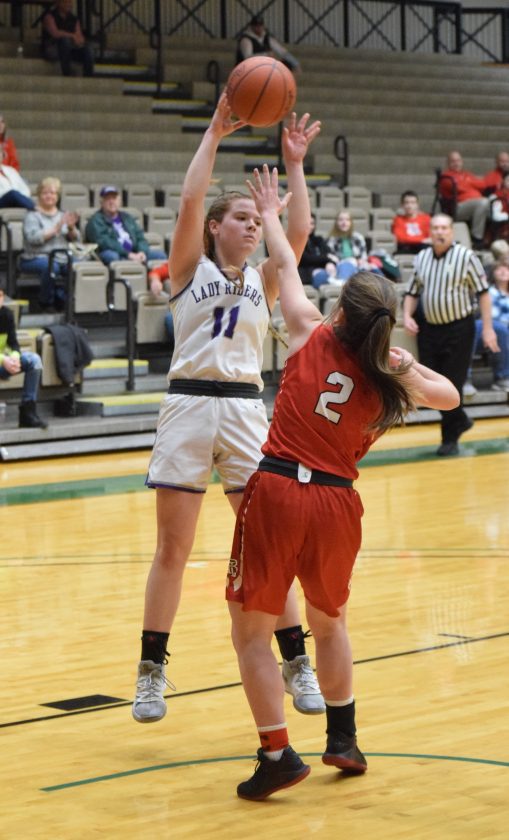 ST. CLAIRSVILLE — When Dave Reasbeck began the this season — the first — of his second tenure as girls basketball coach, he made absolutely no bones about it.

He spoke openly that his senior-laden team, which had struggled at times during their prep careers, was on a mission for a championship.

The mission was completed Saturday morning at Ohio University Eastern’s Health and Physical Education Center where the Purple Riders claimed the OVAC Class 4A title with a 63-45 victory against defending champion Beaver Local.

“These girls deserve this (championship),” Reasbeck said. “This senior class has dealt with three coaches, who were all the complete opposites of each other. They’ve dealt with a lot of sad locker rooms and just down stuff. I told them 32 minutes could make up for all of that and it did. Look at these kids now … they couldn’t be happier.”

The title is the sixth in Martins Ferry history and first since 2009 when Reasbeck was also the head coach.

“I knew we had the ingredients (to win this title),” Reasbeck said. “The kids have worked hard from day one.”

As they’ve done for most of the season, the Riders relied on their defense and energy to force Beaver into 21 turnovers, many of which resulted in easy scoring chances.

Along with using their defense to predicate their offense, the Riders also took control in the middle two quarters, which has become customary during the course of the season.

“I don’t know how great we played, but I told the kids in championship games it doesn’t matter,” Reasbeck said. “You just want to have more points than the other team. We turned them over and capitalized.”

Turnovers and easy scoring chances have been aspects that Beaver Local has dealt with all season.

“Turnovers have been a complete nightmare for us this season and they’ve really determined whether we win or lose a game,” Beaver Local head coach Stephanie Coie said. “We’re just very young at the guard spot, so we’re having some growing pains, especially when you don’t have any pressure on you and turn the ball over. It’s just frustrating.”

When they weren’t scoring in transition, the Purple Riders were pounding the ball inside to senior center Richella Spielvogel or watching Madison Ging slash to the goal or senior Jaden Stalder knock down shots from behind the arc.

Spielvogel, who was named the winner of the John Howell MVP Award, finished with a game-high 29 points and 12 rebounds.

“Eleven years ago, when we last won the OVAC, Shae Moreland did the same thing … dominated inside like Richella did,” Reasbeck said. “When she wants to be, she’s dominant.”