Linsly comes up short to Fort Frye in 3A 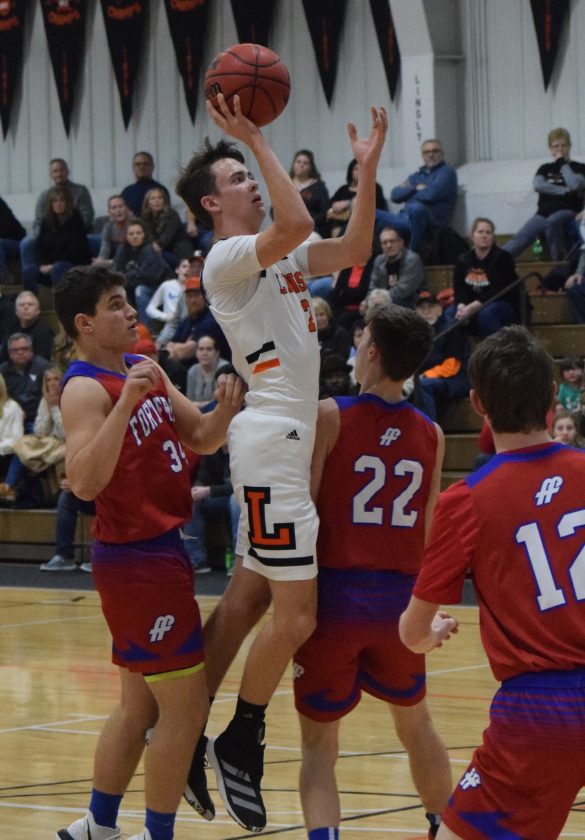 T-L Photo/SETH STASKEY LINSLY’S Marshall Taylor goes up for a shot in traffic during Tuesday’s game against Fort Frye in the OVAC Class 3A semifinals. Taylor scored a game-high 20, but Linsly fell, 45-42.

WHEELING — Momentum in basketball games — actually in all sports — can be a funny thing, especially when the teams are relatively even.

The momentum in Tuesday night’s OVAC Class 3A semifinal between third-seeded Fort Frye and second-seeded Linsly inside the Stifel Fieldhouse went back and forth multiple times.

It actually appeared after Caleb Murray drilled a 3-pointer at the third-quarter buzzer that Linsly may have seized the momentum along with the lead.

Fort Frye, which found itself down by two at 32-30 at that point, had other ideas. The Beverly-based Cadets held Linsly scoreless for the first 6:26 of the fourth and built a nine-point lead and eventually hung on for a 45-42 victory to advance to the conference title game Saturday evening at Ohio University Eastern in St. Clairsville.

“Two evenly matched teams and I kept telling our guys this was like looking in a mirror,” Fort Frye head coach Eric Henniger said. “Linsly plays a disciplined game and has a lot of athletes everywhere. I am proud to come up here and get a win.”

Fort Frye, which was knocked out in the semi-final round on its home court last year by eventual champion Barnesville, will next take on top-seeded Union Local, which needed overtime to get past Magnolia.

“We crossed off some of our goals by getting into the top four to give ourselves a chance to win a championship and now we just have to get focused on Saturday,” Henniger said.

Meanwhile, on the other side, Linsly head coach Dave Wojcik was left wondering what might have been had his team had just a few more seconds or made just a couple more plays.

“Fort Frye, overall, deserved to win because they played better for the course of the game,” Wojcik said. “If we had the sense of urgency we had late in the game, coming out of the gate, it might have been a different story, but when you don’t make free throws, give up offensive rebounds and turn the ball over, you’re in for a long night.”

Those issues all reared their ugly head for the Wheeling-based Cadets in the fourth quarter.

Fort Frye scored the first 11 points of the fourth, which included a trey and an inside bucket from Zane Wallace, a conventional 3-point play by Brady Schilling and a Luke Huffman goal.

Meanwhile, on the other end, Linsly couldn’t buy one. On top of missing from the field, Linsly missed its first five free throws in the fourth quarter.

Even after Luca DiLorenzo stopped the scoring skid with a transition bucket, Wallace sank two at the line to push it back to a 43-34 reading.

Linsly simply wouldn’t go away. DiLorenzo scored again and Linsly stole the inbound pass and found Murray again from deep. Another steal resulted in DiLorenzo kissing one home and just like that it was 43-41 with just under a minute to play.

The teams traded one-of-two at the line and Linsly was forced to foul again. Wallace got one-of-two. Linsly got a clean look from the corner to tie as time wound down, but it clanged off the rim.

“We lost our poise in the fourth,” Wojcik said. “We took some quick, deep 3s and we weren’t in rebounding position. We were frazzled and splintered. We sort of lost it there a little bit, tried to get it back late, but we came up short. Give Fort Frye credit because they made plays, both offensively and defensively.”

Both teams had their share of runs. Fort Frye ended the first on a 15-0 spurt and Linsly proceeded to win the middle two quarters by a 25-12 count, holding Fort Frye to six points in each period.

Fort Frye was led by Kelton Fogle, who scored 10 of his 14 in the first quarter. Wallace finished with 13 and Schilling added eight.

Linsly, meanwhile, was led by talented senior Marshall Taylor, who single handedly kept Linsly in the game early. He scored 17 of his team’s 22 in the first half and finished with 20 for the game. Murray was next in line with nine points.

The next time for Linsly comes Friday in the 3A consolation game. It will visit Magnolia.