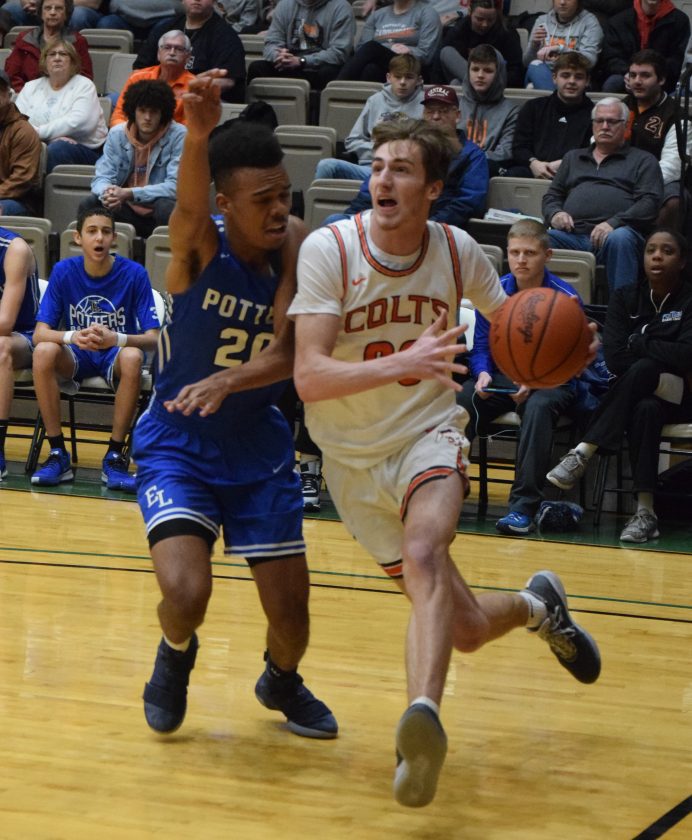 ST. CLAIRSVILLE — Meadowbrook’s history in the Ohio Valley Athletic Conference has been vast.

The Colts added another chapter — their last — in boys basketball Saturday morning at the Health and Physical Education Center at Ohio University Eastern.

Headed to another conference, starting in the fall, Meadowbrook won its fifth consecutive championship at the Wheeling Hospital Boys Basketball Championships, but it had to fight tooth and nail for it.

After building a commanding, 22-point lead at halftime, Meadowbrook held off a spirited comeback from East Liverpool for a 47-39 victory.

“Winning this again (in our last year) is kind of emotional,” Meadowbrook head coach Lou “Scooter” Tolzda said. “I don’t know if I’ll ever get to coach in it again, but it feels good to win again. To win five-in-a-row is something that no school, other than Wheeling Central, has ever done, so that’s something for our entire school to be proud of.”

While the end result was what Tolzda had hoped for, getting there was a challenge.

“What a first half! What a second half,” Tolzda said. “We’ve seen that before. Actually, similar to what happened to us when we played (East Liverpool) the first time. And I told the kids at halftime, let’s not have a repeat of the first time we played, and I think they must have misunderstood me.”

After building a 31-9 cushion and appearing on the brink of blowing the Potters out, Meadowbrook watched East Liverpool score the first 11 of the third and eventually 19 of the first 20 and a Brennan O’Hara field goal to end the third made it a 38-32 game entering the fourth.

“I thought we were a little big-eyed or shellshocked (to start the game),” East Liverpool head coach Nate Conley said. “We played in the district final last year and the Buckeye 8 Championship already this year, so that surprised me a little bit. We got our butts kicked in the first half, and I wasn’t sure if we’d come out and lay down or perform (in the second half).”

In the fourth, the Colts struck first with a basket from eventual game MVP Johnathan McCall, making it 40-32.

East Liverpool, meanwhile, missed its first three shots of the fourth and had a turnover. Those empty trips proved to be enough for the Colts to be able to escape because East Liverpool — outside of two Nick Woodyard buckets — never got on a run in the fourth.

“What could have turned out to be a fun fourth quarter ended up being a possible nightmare situation,” Tolzda said. “At the end of the day, our seniors — Johnathan and Addy (Black) — did what they had to do. Plus, we were able to take some of the air out of the ball, which is something we work on.”

Meadowbrook was led in the scoring column by McCall’s 14. Davis Singleton added 11 and Addy Black, who was a force on both ends of the floor, added 10.

East Liverpool was led by Tresean Jackson, who was held 11 points below his average. He finished with 12. Zavea Green finished with nine.

“Their defense and the way they can dictate the tempo worried us,” Conley said. “We had some good looks at the end, but we just couldn’t make enough shots.