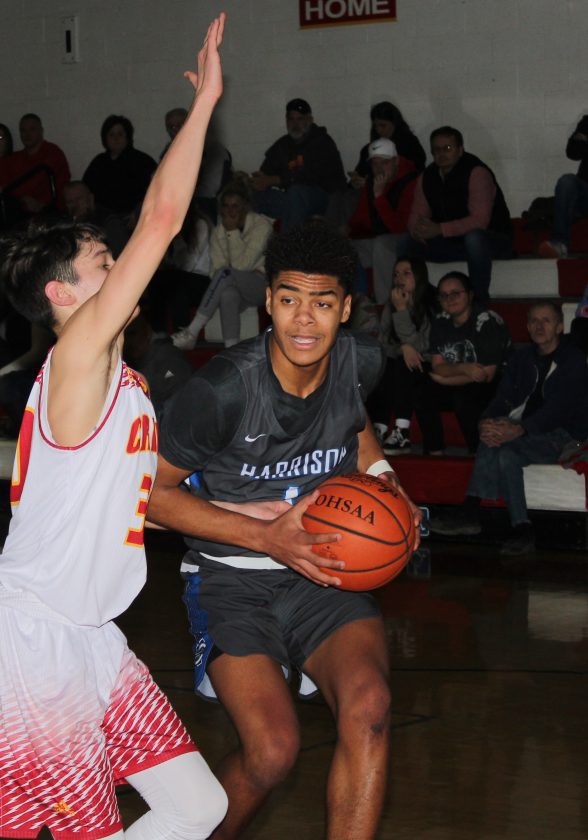 WINTERSVILLE — A fast start led to a good night offensively for Harrison Central.

The Huskies scored at least 14 points in all four quarters, while collecting 20 in both the third and fourth quarters.

“I thought we were pretty efficient offensively,” Harrison Central (12-8) coach Justin Clifford said. “That is what I told them after the game. We did not have many empty possessions.”

Harrison Central netted 24 field goals in the win, with nine coming from behind the arc.

“No. 3 (Skyler Mazeroski) made three in a row in the third quarter when they went away from us,” Indian Creek (2-19) coach Joe Dunlevy said. “A lot of times when kids make a lot of shots, it is because you are not playing very good defense. They say it is the coach’s fault when you are not playing good defense. There were some things that went on on that were not very good basketball on the defensive end of the floor.

“For years, we have prided ourselves on our defense. When they shoot like that, God bless them, but it also shows how we are not playing good defense. Ultimately, that falls on the coach.”

Cale McAfee finished with 13 points, and Mazeroski recorded nine to go along with Mitchell’s 32. Mazeroski and McAfee each made three 3-pointers, while Mitchell tallied two. Jace Madzia made the other shot from beyond the arc.

The Redskins recorded eight 3-pointers on the night. Williams made four, Logan Kuczykowski contributed three and Mike Kuczykowski collected one.

Indian Creek made 17 field goals in the game.

Mitchell got off to a fast start, as he scored eight of his team’s 14 points in the first quarter, enabling the Huskies to take a 14-8 lead into the second.

Mitchell really got going in the second, as he produced 14 points to end the first half with 22. The visitors took a 31-16 lead into the locker room at halftime.

Mitchell delivered two points in the third, and he recorded eight more in the fourth.

“That is what he does,” Clifford said. “He makes the right basketball play. He does not care if he scores 30 or 40. He just wants to win. We had kids open, he threw them the ball and they made the shots.”

Both teams scored at a good clip in the third. The visitors outscored the hosts, 20-15, to take a 51-31 advantage into the fourth.

“It always looks better when you shoot the ball well,” Dunlevy said. “You have kids who work hard in the gym. They get a chance, and they knock down shots.”

The Redskins recorded three 3-pointers in the third.

“We were packing it in,” Clifford said. “We knew they were going to make a couple. We talked about playing wider and getting our hands up. I thought offensively we played really well.”

“They are well coached,” Clifford said. “They do things that bother you. I am proud of the way our kids handled adversity and did what they need to do.”

The Huskies led by as many as 27 at one point in the win.