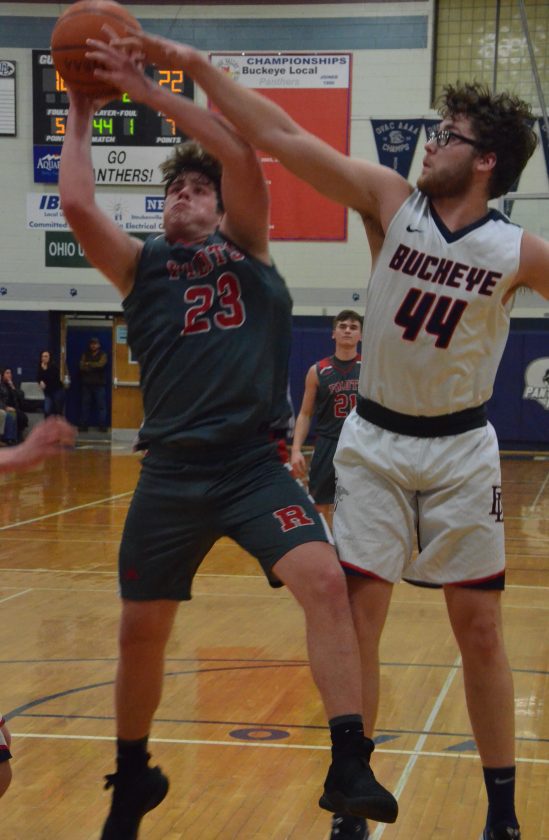 RIVER’S TY Long (23) shoots over top of Buckeye Local’s Hunter Darrah (44) during Friday night’s game in Connorville. Long had a double-double to lead the Pilots past the Panthers, 54-46.

As is the case many times in athletics, you can’t judge a team by its size. Instead, the heart and determination it shows is what make the difference between winning and losing.

“They jumped on us early by hitting some shots, but we made some adjustments,” River head coach Mark Romick said after picking up career win No. 301. “We gave up 19 points in the first quarter but only 27 for the rest of the game. We stepped it up defensively. We had a couple of lapses, but overall I thought we did a good job.

“I thought we played really well in doing what we needed to do to win,” Romick noted.

“We were out-sized everywhere on the court but we play with a lot of heart. We took care of the basketball, especially in the middle two quarters when we started to pull away a little.

“Anytime you take care of the basketball it gives you that many more opportunities to score,” Romick continued. “Usually those extra opportunities come forth. I thought we passed the ball extremely well tonight.”

Buckeye Local took a 22-10 lead on a 3-point basket by Hayden Taylor to start the second quarter, but misfired on its next seven attempts. However, River didn’t fare much better as it made just two of 13 shots in trailing 22-18 at the intermission.

The contest was deadlocked three times in the third quarter, the last at 29 as Connor Hunter knocked down a trey to give the Pilots a 32-29 lead they would never relinquish.

River netted 36 points in the second half, with 20 of those coming from the charity stripe. Included in that mark was a 16-for-23 effort in the fourth quarter.

“When it got crunch time in the fourth quarter I thought we shot really well from the foul line,” Romick said. “We were going 1-for-2, 1-for-2 for most of the game, but when they made a run we stepped up and shot a decent percentage.”

It was a team effort as well. Stone Thompson, who didn’t score in the first half, tickled the twine five times in the final period, while freshman Brody Lollathin added four and Colton Lawrence had three. Ty Long and Hunter had two each.

Hayden Taylor made it 42-39 and Heaton immediately called timeout with 3:30 remaining. After the 30-second break, River went on an 8-0 run to take a commanding 50-39 advantage with a minute left. Sparking the surge was a nifty assist from Thompson to Austin Cramer for a layin. The other six points came on foul shots.

“You couldn’t ask for a better start,” Buckeye Local head coach Chris Heaton said. “We shot the ball pretty good in the first quarter, but after that we didn’t. I think this is one of the better groups we’ve had as far as shooting the basketball. When the ball doesn’t go in (the basket) I think we get down and it affects other parts of our game.

“They (River) battled back after being down in the first quarter,” he added. “They’ve got some good-sized kids and did a good job of keeping us to just one shot. They also did a nice job on the offensive glass of getting second and third opportunities, which I thought was the difference in the game.”

The Pilots held a 44-32 margin off the glass as Long had a game-high with 13. The sophomore completed his double-double with a team-best 12 points. Lollathin added 10 markers and seven boards. Thompson and Lawrence evenly divided 18 lightings.

River went 22-for-36 from the charity stripe, compared to a mere 1-for-9 for the Panthers.

“That’s been the story all year for us,” Heaton said of the disparity in free throws. “I think on the year we’re getting outshot something like 450-232, so every game we’ve been getting outshot from the free throw line. When we do get there that’s been one of our struggles. I think we’re shooting right around 50 percent and that is totally unacceptable. We practice (shooting) free throws in practice just like everyone else, but moving forward, especially in the tournament, we’ve got to be able to bury them when we do get there. I’d also like to see us get there a little bit more, as well.”

The Panthers host Steubenville Catholic next Friday in their regular season finale. The Pilots have makeups with Union Local and Columbus Bishop Ready.

∫ Last night’s matchup was only the second between the schools in recent memory. Romick said the Pilots hosted the Panthers several years ago, also in an OVAC consolation game. However, the schools have signed a home-and-home series for next season.