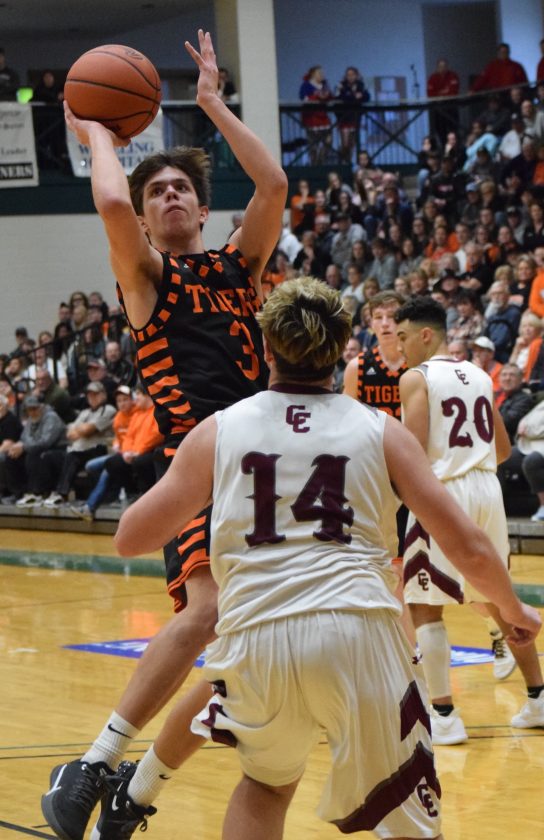 Photo/SHERI McANINCH SHADYSIDE’S Mason Vannest goes up for a shot over Wheeling Central’s Michael Toepfer during Saturday’s OVAC Class 2A final at OUE.

Overall, it is the Maroon Knights’ 28th OVAC basketball crown. It also marks their third win over the Tigers this winter.

The dynamic guard was virtually unstoppable, pouring in 34 points, including seven treys. He was named the John Howell MVP for his impressive efforts.

“It is very special winning the OVAC title. It is a great conference,” Stephens said. “Doing it eighth straight times means that a lot of different players have gotten to share winning something very nice.”

The triumph was the 16th against six losses for Wheeling Central. Shadyside owns an identical record.

The game began in an old-fashioned shootout.

The two teams both boarded 21 points in the opening quarter.

Wheeling Central remained hot in the second frame. Shadyside did not, tipping the momentum in the Maroon Knight direction.

Central outpointed the Tigers 19-10 in the period for a 40-31 halftime advantage. Lee and sophomore sharpshooter Ryan Reasbeck each delivered six points in the quarter for the Knights.

Shadyside’s hopes for a quick start after intermission when up in flames on its first two possessions. The Tigers failed to connect on a breakaway layup followed by a turnover.

Lee drained three more trifectas in the third, the last coming at the 2:14 lighting, ballooning the lead to 53-34. Coach Ed Andes’ squad was able to pare the gap to 58-44 entering the final chapter.

Shadyside, with Hendershot leading the way, methodically made matters interesting in the final eight minutes.

A Hendershot trey brought the Tigers to within 66-59 at the 1:59 mark. Hard-working sophomore Mason Vannest buried another Tiger trifecta to make it a 66-62 score with 1:24 to play.

Lee, however, slowed the Tigers’ surge, meshing two charity tosses. After a Tiger miss from the floor, Lee drained two more freebies for a 70-62 Central advantage with 38.8 to play.

Seconds later, Lee added one more free throw before Shadyside sophomore Korey Beckett nailed a bonus ball with 7.2 seconds left, making it a 71-67 score. Central’s J.C. Maxwell, however, delivered the final nail in the Tigers’ coffin with a free throw with 6.5 ticks left.

“What can you say about Avery? He was super again (Saturday). Avery has been playing and practicing very well for a good while now,” Stephens said. “We didn’t play the best of defense in the first quarter, but Shadyside has weapons. They shot it well.

“But we did like the tempo. We like to get it out and go, so the pace was good. Shadyside made a nice run. J.C. (Maxwell) made a couple of 3s that help to slow them down. We probably need to spend some more time on time-and-score. But I am happy for my players and coaches. It’s very nice winning OVAC titles.”

Maxwell and Reasbeck were Lee’s chief support with 15 and 13 points, respectively.

Hendershot was nothing short of sensational in a losing cause. The 6-3 dandy equalled Lee’s 34 points, 14 coming in the final quarter. He now has over 1,400 career points.

Beckett was next with nine counters.

“We missed way too many easy shots. We had good looks but left too many points on the table,” Andes said. “We played well in the first and fourth quarters but had trouble scoring in the middle two.

“Lee was tremendous for them, as was Kelly for us. We made a nice run, cutting it to four. Give Wheeling Central credit. They are a very good team.”

MORGANTOWN, W.Va. - With the country and state starting to reopen from the COVID-19 pandemic, the West Virginia ...

College coaches in non-revenue sports are worried about the impact legislation allowing compensation for athletes ...

Former Auburn coach Pat Dye, who took over a downtrodden football program in 1981 and turned it into a Southeastern ...

MINNEAPOLIS (AP) — The jersey-wearing camaraderie. The scent of sizzling sausages. The buzz before a big game. ...