Shadyside holds off Southern Local to reach 2A title game 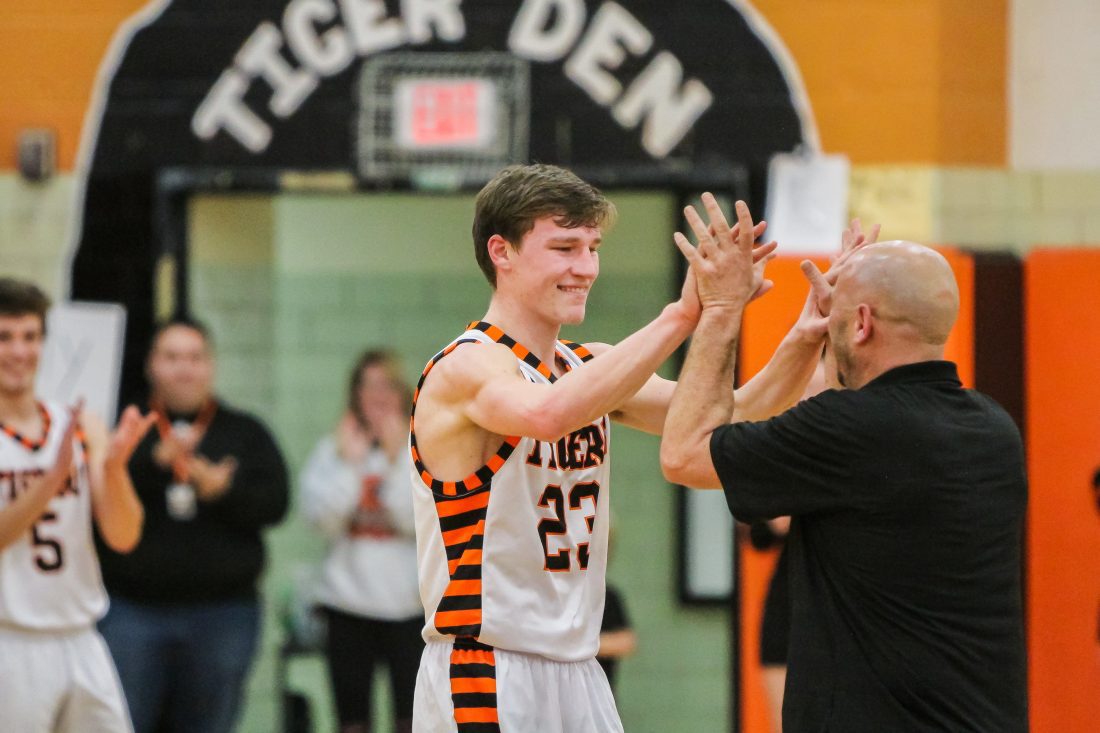 Photo/TERRY HANCOCK SHADYSIDE SENIOR Kelly Hendershot is congratulated by Todd Antill after Hendershot scored his ninth point during the first quarter to become the all-time leading boys scorer in Shadyside basketball history. Hendershot finished with 26 and the Tigers defeated Southern, 65-63 to advance to the OVAC 2A title game.

SHADYSIDE – There was good cause for a double celebration in Tiger Town Tuesday night.

First, and foremost, Shadyside punched its ticket into Saturday’s Wheeling Hospital’s OVAC 2A championship game at Ohio University Eastern via a hard-earned 65-63 win over Southern Local. The second-seeded Tigers will now face familiar foe top-seeded Wheeling Central, which survived its own semifinal scare against Clay-Battelle, in the 4 p.m. title tip.

Shadyside will be seeking its first OVAC hoop crown since 2010.

Making the Orange victory even sweeter came at the 1:58 mark of the first quarter when all-stater Kelly Hendershot became the school’s all-time boys’ scoring leader via a conventional three-point play. He entered the contest with 1,355 markers, needing just nine to pass Todd Antill’s 32-year-old record. Antill congratulated Hendershot in a brief ceremony after the record-setting point.

Hendershot, who threw down a pair of third-quarter dunks, led all scorers on the night with 26 points, giving him 1,381 for his career. Ashley Holenka is the school’s all-time leading hoop scorer with over 1,700 markers.

“I feel happy to get the record but the big thing is it came with a win,” Hendershot said. “But it is a record I could not have attained without my teammates, coaches and family. They were all a part of it.”

Shadyside is now a sparkling 16-5. The hard-playing Indians, meanwhile, dropped to a fine 15-5.

“We didn’t play one of our better games but we won. We had chances to put them away. They kept fighting back,” Shadyside head coach Ed Andes said. “We were sloppy with the ball at times and missed too many free throws. Give Southern credit, however, they have a nice team and play extremely hard.

“I am also very happy for Kelly. That is a great achievement,” he added. “He is a character young man who has worked hard and is a team player. He is very deserving of the record.”

Cam Grohaus paced Southern with 18 points. Josh Pratt and Brock Smalley each checked in with 12 for the Salineville-based Indians.

“The last couple of games we have struggled shooting threes and at the foul line. Tonight we did a much better job of both. That enabled us to compete,” Southern head coach Gerard Grimm said. “We made some nice runs but just couldn’t get over the hump. We just needed to do a little better job with the 50-50 balls and taking care of the ball at the end.”

The game was knotted at 56-all with just over four minutes to play before Parr busted a trey. After a Southern hoop, Beckett buried a trifecta with 2:44 showing for a 62-58 Tiger advantage.

Pratt brought the Indians back to within one at 62-61 with a bonus goal. Parr again stepped up for the hosts, meshing another trey with 1:50 remaining, good for a 65-61 Orange lead.

A series of missed Shadyside free throws and Southern turnovers kept the scoring frozen until Southern’s Sam May goaled at the final buzzer for the final two-point margin.

Shadyside led 18-13 after one period and owned a 32-26 halftime advantage. The hosts took a 52-45 upperhand into the final frame.

Shadyside committed 11 turnovers, many at the most inopportune times. Southern was guilty of 10 miscues.

The Tigers also bagged the reserve game in overtime.