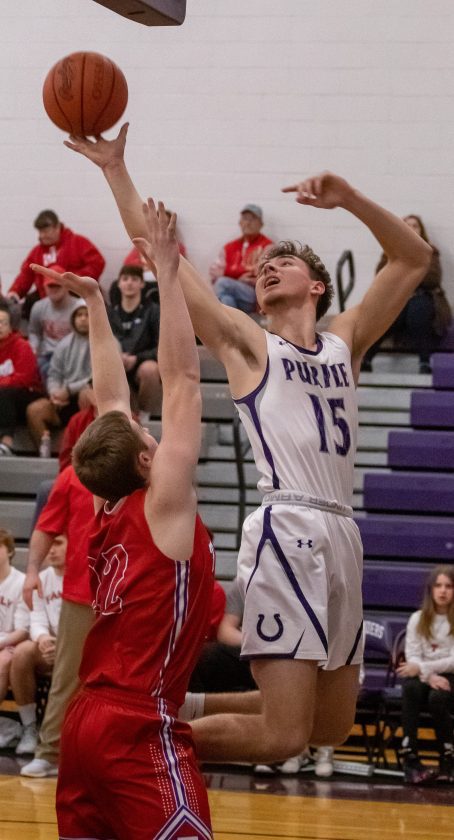 Photo/KRISTIN MAZGAJ MARTINS FERRY'S Logan Smith goes up for a shot during Tuesday's game against Toronto.

MARTINS FERRY – Momentum is an important thing in sports, but even moreso at this time of the year on the hardwood. The Martins Ferry Purple Riders allowed 18 first-quarter points, then only allowed that same amount over the remainder of the game, riding a huge 31 point-13 rebound night by junior Logan Smith to take a 74-36 victory for the Purple Riders on Senior Night.

“Every game is important. We added this game from where the OVAC ended to where the tournament began because without it, that layoff is just so long. I think this will do us some good. I thought that we played pretty well on both ens of the floor and I really liked our effort tonight,” Martins Ferry coach Derek Edwards surmised of the game. “Even when we had a lot of our bench guys in, I think they did a nice job, so I’m very proud of our effort.”

Toronto’s Sean Tucker was succinct and short in his evaluation of the contest, stating: “They (Martins Ferry) had a huge size difference. We had to box out and play to our strengths. We didn’t box out well and they crashed the boards well. I hope the next time a team is pouring it on us we take it a little more personal.”

The Red Knights (8-13) opened the game strong, firing off a 7-2 run behind the shooting of Anthony Myslinsky and A.J. Clegg before Logan Smith began to assert himself. Once the 6-6 junior found his footing, the Purple Riders’ (12-10) offense gained steam. The Riders took their first lead at the 3:26 mark 11-10 on a bucket by Smith, but Toronto’s Jay Havlin drilled his first of a pair of first quarter threes the next trip down the floor to give the visitors the lead back. Unfortunately for the Red Knights, that was their last lead of the game. Martins Ferry consecutive three pointers by Dasyn Hores and Smith, followed by a steal on the Knights’ inbound that was exclaimated by a bucket by Jaizen Miles to put the hosts up by a 19-13 count. By the end of the initial quarter, Ferry held a 25-18 edge. A big part of this was the Riders having a 10-3 advantage on the glass, including five offensive boards by Smith. Smith and company pushed the advantage further in the second period, forcing four Red Knights turnovers and holding the visitors to a mere two buckets in the second. The Belmont Countians received buckets from four players in the second, as Smith netted 10 over the eight minute frame. The junior also brought the Ferry faithful to their feet when he stole the ball at mid court and delivered a thunderous dunk. At the half, the Riders led 42-23.

The Purple defense held the Jefferson Countians to seven third quarter points among three players, as each team started emptying their bench. Even as they played their bench, Martins Ferry maintained a rebounding advantage and continued to keep the defensive pressure up. Miles and Hores led the Riders’ scoring charge in the third, leaving the hosts up by a 55-30 margin after three.

The fourth quarter saw seven different Riders dent the scoring column with Martins Ferry outscoring Toronto by a 19-6 count, leading to the 74-36 final.

Smith’s 31-13 paced everyone, as the junior also added a pair of blocks. “It was a Tremendous effort. He is really coming into form and he is one of the premier players in the area, and not a lot of people know that yet, but Logan Smith is a player, and he doesn’t just do it on offense. It’s rebounding the ball. It’s what he does for us on defense and getting deflections and being able to guard guards well. That’s not easy for a 6-6 kid to do a lot of,” Edwards said of Smith’s effort. Miles added 12 points, while Hores finished with nine points and nine rebounds. In all, all 15 Riders that dressed played and 10 scored.