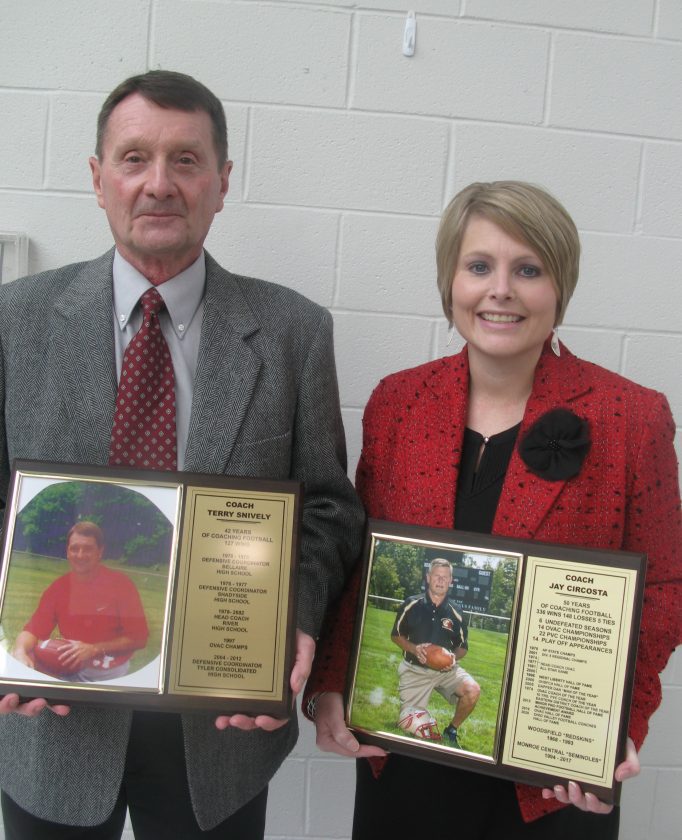 T-L Photo/ BUBBA KAPRAL TERRY SNIVELY, left, and Jay Circosta were inducted into the Ohio Valley Football Coaches Association Hall of Fame this past Sunday. Accepting for Circosta was his daughter, Susan Snively.

STEUBENVILLE — Jay Circosta and Terry Snively are no strangers to halls of fame. The two football coaching icons added yet another shrine to their impressive resumes last Sunday.

It also has a Hall of Fame wing.

Snively (River) and Circosta (Woodsfield & Monroe Central) fittingly got the call together. They both scripted long and ultra-successful careers in Monroe County.

This marks the first time since 2015 that the OVFCA has added to its HOF. That year, Shadyside’s David “Ty” Fleming was enshrined.

Circosta was unable to attend the affair, as he was in Florida. His daughter, Susan Snively, also the daughter-in-law of Terry, accepted eloquently on his behalf.

I was able to reach out to Circosta by phone Tuesday morning.

“They are all special (halls of fame). This is my fourth one,” Circosta said. “This one is really nice because it is with the coaches you go head-on-head against. These are the guys you have an association with on a day-to-day basis.

“I have always said some of the best coaches are in the Ohio Valley,” he added. “I regret that I couldn’t be there. It is a great honor. I would have loved to be there with Terry.”

Circosta compiled an amazing 336-144-5 during his 47-year head coaching career. That win total sits second only to Steubenville legend Reno Saccoccia in Ohio Valley history while ranking in the top 10 all-time in the state of Ohio.

He launched his coaching career in 1968, serving as an assistant three years at Woodsfield under former Ohio State University standout Bob Butts. When Butts left for Union Local, Circosta took over to begin a 47-year head coaching run, the first 23 seasons at Woodsfield and then, following consolidation, for 24 years at Monroe Central.

He was previously inducted into the West Liberty University Athletic Hall of Fame, OVAC Hall of Fame and the Ohio High School Football Coaches Hall of Fame.

SNIVELY, meanwhile, cut his coaching teeth in 1970 as an assistant to Jake Olsavsky at Bellaire High, helping to coach such luminaries as Ed Burgy, Ron Lee, John Ostrander and Lance Mehl. He left the All-American Town after six years with the Big Reds heading south, serving as Shadyside head basketball coach and assistant football coach for two seasons.

In 1978, he retuned to his roots, being named head football coach at River, a job he relished with great success until his retirement in 2002. He guided the Pilots to 127 wins.

His 1997 team went 10-0 and won the OVAC title while his teams made the Ohio playoffs in 1993 and 1997. Snively coached in the OVAC All-Star Game twice while also coaching the Ohio North-South Game in 1994.

In 2004, Snively received the Upper Ohio Valley Dapper Dan Carl Hamill Award. He and his son, Mike, are both enshrined in the OVAC Hall of Fame.

“I want to thank the Ohio Valley Football Coaches Association for such a great honor,” Snively said at the banquet. “It is hard to believe I started way back in 1970 as an assistant for Jake Olsavsky in Bellaire. It doesn’t seem that long ago.

“I have to thank all my coaches over the years. During my 25 years at River, 75 percent of my coaches worked with me for 15 years or longer. That is great loyalty on their part,” added the former Powhatan High four-sport great. “I have to thank my players. They always gave me 100 percent.”

“Thanks to Mike Flannery at River, I am still in this business. He asked me to come around and help a few days. I am with him everyday and in the pressbox every Friday night,” Snively said. “But most of all, I have to thank my wife Rose. She has put up with me and this coaching profession for 50 years.”

ONE DISAPPOINTING note about the banquet was poor attendance by OVAC schools.

There are 49 football-playing schools in the conference. Of that number, only 29 schools showed up for the banquet. The no-shows included Parkersburg South, New Philadelphia, Dover, Brooke, Cambridge, Meadowbrook, Southern, Shenandoah, Wellsville, Caldwell, Bridgeport, Madonna, Conotton Valley, Beallsville, Valley, Trinity and Hundred. The classy event paid tribute to all-conference award-winners. A slew of nice plaques went unclaimed at those schools’ tables.

Featured speaker will be Rich Donnelly. The Steubenville native has coached at the major league level for several teams, and owns a World Series ring while assisting Jim Leyland with the Florida Marlins. He also wrote a best-selling book – “The Chicken Runs at Midnight.”

In conjunction with the banquet, the Martins Ferry Chamber is selling copies of that book at a reduced price. Book sales are moving briskly. For more information on the banquet or the book, call the chamber office at 740-633-2565.

DAVE BRUNEY is doing well after undergoing open-heart surgery a few weeks back. The Martins Ferry football coaching legend is at home, rehabbing under the tender loving care of his wife, Cheryl.

I HAD the privilege of covering the boys’ PAC 8 basketball championships at Sherrard Middle School recently. Bridge Street defeated Triadelphia in the seventh grade title tilt while Warwood topped Brooke in the eighth grade championship game. The gym was standing-room-only with raucous fans. There was more excitement and passion in those games than most high school games.

LILY RITZ is amazing. The former Cambridge High all-Ohioan hoopster and thinclad is weaving a magical season with the Wheeling University hoop team. Her 36-rebound effort in a 75-72 win over West Virginia State last weekend set a national collegiate record for any level. Her outstanding play has put her in conversation for MEC player-of-year accolades while also helping the Cardinals exhibit much team improvement. She was named MEC and national player-of-the-week for her rebounding feat.

CONGRATULATIONS GO out to Shadyside all-stater Kelly Hendershot on becoming the school’s all-time boys’ basketball scoring leader. He set the mark Tuesday against Southern Local in a 65-63 OVAC semifinal win. The 6-3 senior now stands at 1,381 tallies. Todd Antill held the previous mark for 32 years with 1,363. Both are class acts.

MAJOR LEAGUE Baseball’s proposed playoff plan is simply goofy. So much for tradition. Fourteen teams are way too many. Picking your opponent is an automatic chip on the shoulder for the lower seed, while the division winner hosting all three games is totally unfair. Leave it alone, commissioner.

CARMEN LICHT is a redshirt freshman on the University of Cincinnati track team. She is a middle distance runner. Licht is a 2018 graduate of Macedonia Nordonia High School in Ohio, where she was a seven-time placer at the state meet. Licht is the daughter of former Martins Ferry High track standout Mary Margaret Brown. This past weekend, the Cincinnati women’s distance medley relay team broke the school record while competing in the Charlie Thomas Invitational in College Station, Texas. Licht was a member of that quartet. She ran the 400-meter portion of the event and clocked a sharp 57.8.

KUDOS TO River High boys’ basketball coach Mark Romick for achieving the 300-win plateau this past Tuesday. He also has done exceptional work upgrading the Pilot athletic facilities in his role as the school’s athletic director.