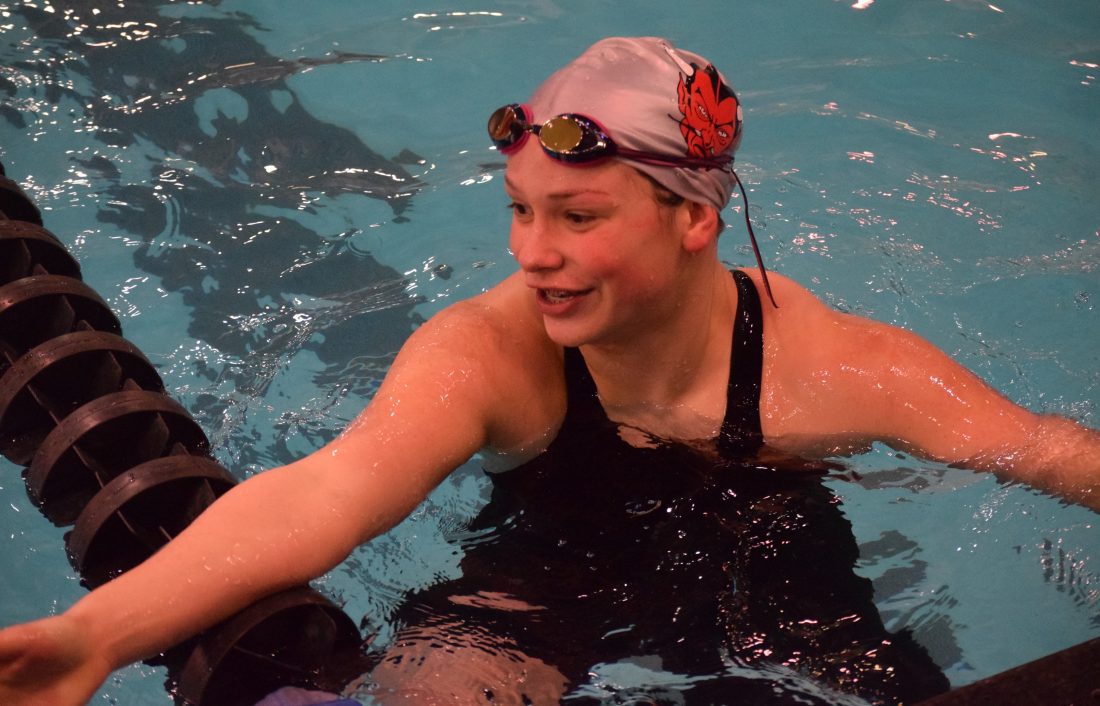 T-L Photo/SETH STASKEY ST. CLAIRSVILLE sophomore Casadie DiBetta reacts after seeing the scoreboard and her personal best time of 1:02 in the 100 yard breaststroke.

CANTON — And the sophomores shall lead them.

When the OHSAA State Swimming Championship resumes this afternoon at Branin Natatorium in the shadows of the Pro Football Hall of Fame, St. Clairsville’s talented tenth-grade quartet of Casadie DiBetta, Brenna Planey, Kylie McKeegan and Olivia Moyer will be suiting up.

St. Clairsville remained alive in three events, including a pair — the 200 medley relay and 100 breaststroke –in which it will swim in the coveted ‘A’ final after qualifying swims Thursday evening.

DiBetta — the defending state runnerup — won her heat during the qualifying rounds to punch her ticket to the gold-medal swim in the breaststroke.

A huge smile came to DiBetta’s face when she looked up at the scoreboard and saw a 1:02.61, which is a personal best time. Breaking the 63-second barrier had been the goal.

“I am so happy,” DiBetta said. “To get that 1:02 is amazing. It’s something I’ve been trying to do. The girls in my heat really pushed me and I just feel great to have that time.”

Electing not to do advance scouting, DiBetta didn’t watch defending state champion Jamyson Robb of Beloit West Branch, who swam in the following heat, touch the wall in a state-record time of 1:01.27.

“I think the final will be (a great race),” DiBetta said. “I am really going to push myself and see what happens. I definitely have to get my rest and be ready for (Friday). I know Jamyson is super fast, so it will be great to be right by here because I know she’ll push me to a great time.”

DiBetta should warmed up by the time the breastroke rolls around. She’ll begin her day swimming the breaststroke leg of the medley relay and then swim in the butterfly’s ‘B’ final.

The squad, which came into the state meet seeded seventh posted the seventh-best time in the qualifying round in 1:49.73. The top qualifying time is 1:44.72 by the juggernaut Gates Mills Hawken squad.

Barring a disqualification, the Red Devils are guaranteed a spot on the podium and an all-Ohio finish.

Junior Maggie Marody missed the ‘B’ final in the 500 freestyle by two hundredths of a second. She posted a 5:15.47 and finished 17th overall.

Moyer failed to advance to today’s scoring swims in the 100 fly. She touched in 59.96, which was good enough for 20th overall.

Martins Ferry’s Jarrett Bolinger saw his brilliant prep career come to a close. He came into the state meet as the 24th seed and finished in that spot in the 100 freestyle.