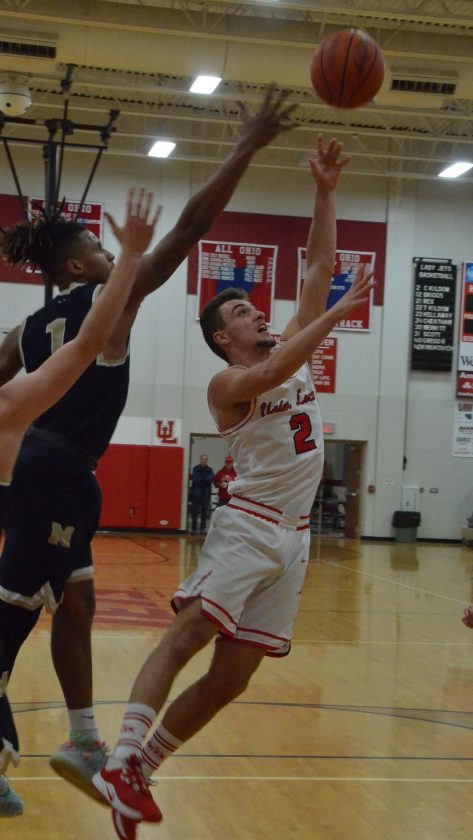 However, after watching the Blue Eagles send the game into the 4-minute extra session on Trevor Williamson’s three-point basket, the Jets held the fourth-seeds scoreless en route to a 47-43 victory before a vocal crowd inside “The Hangar” at Union Local High School.

With the hard-earned triumph, head coach Zach Delman’s squad punched its ticket to the championship game Saturday at Ohio University Eastern. The top-seeded Jets (15-5) will meet No. 3 Fort Frye, which knocked off second-seeded Linsly, 45-42, in the other semifinal Tuesday night inside the Stifel Center on the Leatherwood campus.

“What a game! What a game,” Delman said. “I’m so proud of the way our kids battled and battled. It would’ve been easy for our kids to come to the bench after they (Magnolia) hit that three-pointer at the end of regulation and be dejected to start the overtime, but they didn’t. We go out and get a stop to start the overtime. That was a big key.”

Neither team could seize the upperhand during the first three quarters. Magnolia (12-5) led 10-8 after one and 22-21 at the half. However, Union Local took a 34-31 edge into the fourth quarter and led 41-36 with 90 seconds left when Luke Merritt dribbled into the lane before dishing off to Matt Bateman for a layup.

After each team turned the ball over, the Blue Eagles’ Trevor Williamson was fouled while attempting a three-pointer. He connected on the first two, making it 41-38.

Nathan Meyer knocked down both ends of a 1-and-1 with 40.1 ticks showing, but Magnolia’s Qwailei Turner got an offensive rebound and scored while being fouled with 29.5 left. He missed the second shot as the margin remained 41-40.

The Jets missed two free throws at the 19.6 mark, but the Blue Eagles followed suit with 7.8 left. However, on the second miss, Magnolia’s Gavin Postlethwait grabbed the rebound and immediately sent the ball to Williamson who calmly drained a trey with three seconds on the clock.

Union Local’s desperation shot from midcourt was off the mark as the teams headed to overtime.

Unfortunately for the West Virginians, little did they know Williamson’s bonus goal would be the last points they would score.

Luke Merritt, who had misfired on two free tosses 25 seconds earlier, tickled the twine twice on a pair of attempts with 12.7 showing for a 46-43 advantage. After Magnolia failed to connect on a three-point try, Zach Bateman secured the rebound and was fouled with 1.5 remaining. He missed the first shot, but cashed in the second for the final four-point margin.

“We’ve got confidence in those guys to step up there and make their free throws. They’ve got to wipe out what happened in the past and focus on the present,” Delman said. “We did that.”

The Blue Eagles misfired on all five of their field goal attempts in OT.

“I thought the effort was there. It’s great being part of the OVAC playoff and give Union Local credit. They made plays when they had to,” Tallman offered.

“A big thing was free throw shooting late. We’re supposed to be the best free throw shooting team in The Times Leader coverage area, and we weren’t down the stretch,” Delman noted as his team made 4 of 8 in OT. “Had we made our free throws, I think we shot 17-for-26 which doesn’t seem bad but they (the misses) were all at crucial times, we would’ve been alright.”

That was an area Tallman wasn’t happy with, the disparity in free throws. Union Local went 17-for-26 from the charity stripe, including 10 of 12 in the first half to keep the game close, compared to 3-for-10 for Magnolia.

“Look at the fouls and the number of foul shots they took compared to what we took,” he said. “I never complain about officials … ever, but it’s just disheartening.”

However, he said his team will learn from this loss.

Meyer led a trio of double-digit scorers for the Jets with 12. Merritt added 11 and Matt Bateman had 10. Meyer also pulled down 11 rebounds.

The athletic Turner led all scorers with 22. He completed his double-double with a game-best 15 rebounds. Williamson added 16 markers, but five other Blue Eagles combined for five points.