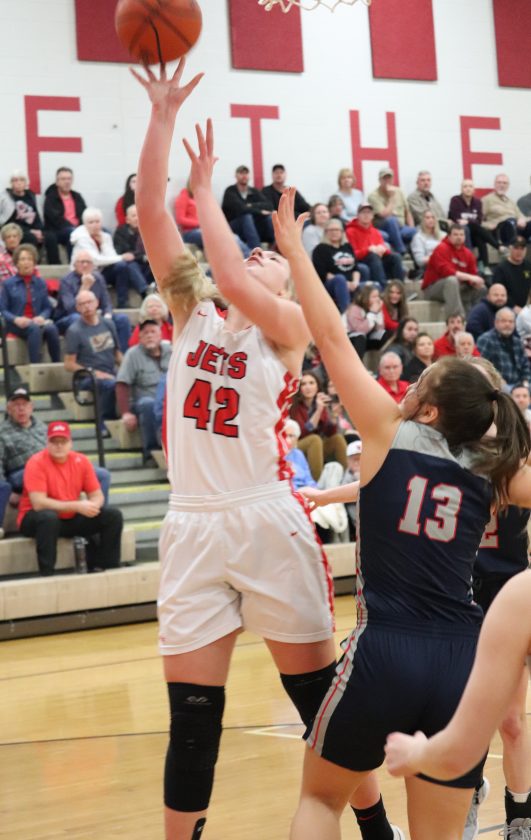 Not what Coach Rob Barr wanted to see with his young team clinging to a five-point lead.

But what started with turnovers ended with the cutting of nets as the Jets quickly course corrected and took care of a scrappy Morgan Raiders team, 55-36, Saturday afternoon in an Ohio Division III sectional co-final.

Next up for Barr’s Jets (23-1) is a meeting with Tuscarawas Valley, a winner against Sandy Final in the opposite co-final. That game will take place at 7 p.m. Wednesday at a site to be determined.

That first quarter was uncharacteristically sloppy for UL. The Jets committed 15 turnovers for the game, but five came in the first quarter. They also shot an abysmal 29 percent from the floor.

Couple that with Morgan’s owning of the glass early and it’s easy to see why the Jets clung to a 9-8 advantage after one.

“They boxed us out and Reagan didn’t have the usually offensive rebounds she normall does,” Barr said. “But they are a good team. Every team from now on will be better. That’s tournament basketball.”

Vinskovich had nine at the half and was backed by six from Casey Kildow as the rest of the team struggled to find the range early.

Leading 23-18, the Jets began the third quarter with the aforementioned three straight turnovers. That allowed Morgan to take its first lead of the game, 25-23, on a Shelby Fisher 3-ball from the corner.

The Raiders only managed four points the rest of the half as the Jets set off on a 16-4 run to close the quarter.

UL’s press was able to hurt some, but it was the team’s base 2-3 zone that kept Morgan from getting closer.

Morgan as a team likes to penetrate and score points in the paint off drives but against UL’s back three, those points were difficult to come by. Instead, the Raiders settled for drive and dishing or skip passes around the arc to get open looks from beyond.

The problem was, they weren’t hitting many.

“We saw on film that they liked to drive the ball, but they sort of did it out of control,” Barr said. “So we told the girls to find your spot, get your hands up and make them go around.

“We forced a lot of walks as they were trying to step around our big people and it worked out.”

Morgan was led by Rilee Coon, who totaled nine points and seven rebounds. Sophia Smith added eight, with six coming in the first half.