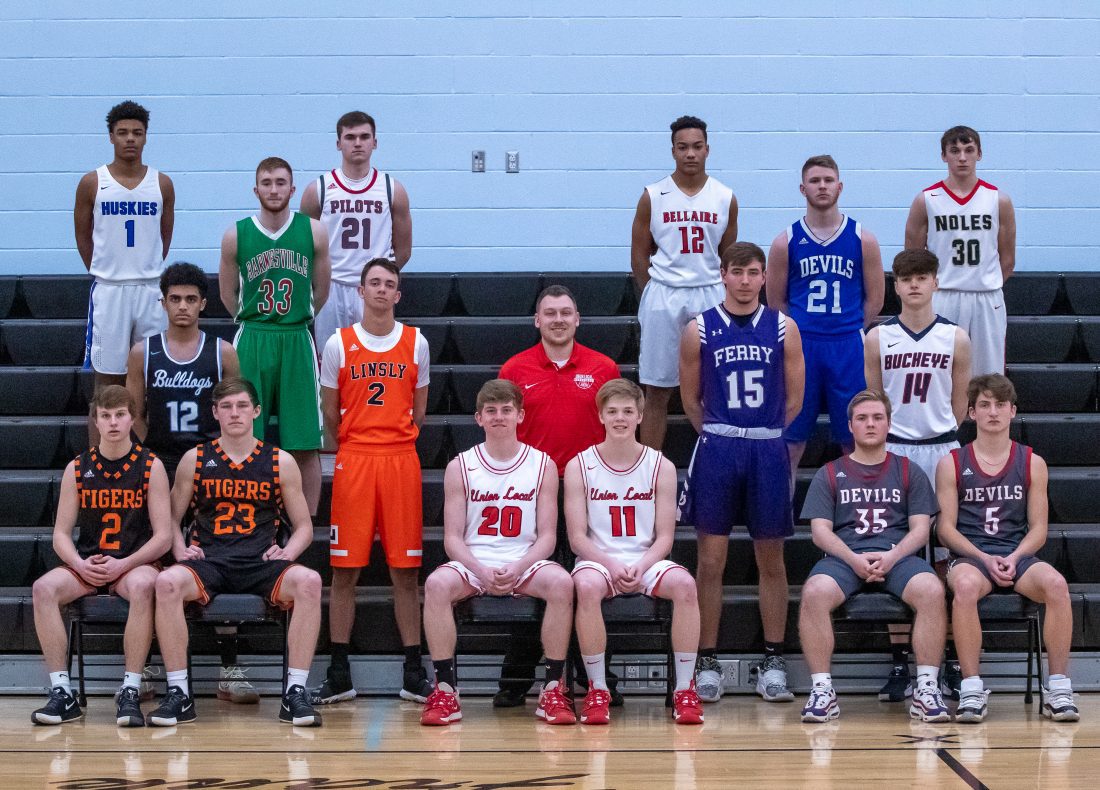 While no area boys basketball teams went on any extended runs, many individual performances to remember were put forth this season.

Many of the players who shined this season are being honored today as members of the annual All-Times Leader Team, which recognizes players from throughout the T-L coverage area as well as Linsly.

The team is chosen by the T-L sports staff with the help of area coaches.

First-team all-everything senior Luke Powell, who is headed to West Liberty to play next season, is the captain of the team, while Union Local head coach Zach Delman is the coach of the year.

Here’s a capsule look at the honorees:

LUKE POWELL, Barnesville — This senior continued to do what he’s done throughout his career and that was score the ball in bunches for Coach Matt Johnson’s Shamrocks.

Powell averaged 33 points and 11 rebounds a game for the Shamrocks as he surpassed the 2,000-point mark in January and then went on to become the school’s all-time leading scorer with 2,374 career points. He knocked down 105, 3-point goals this season.

“Luke’s the type of player that a coach is lucky if they come around during your time at a school,” Johnson said. “He has a tremendous work ethic in and out of season and has great knowledge of the overall game. He made a great impact on our program and has a set (a standard) for the younger generation of Shamrocks to strive for.”

KOBE MITCHELL, Harrison Central — This junior standout put forth the kind of season, many, including head coach Justin Clifford, expected as he led the Huskies in basically every statistical category.

Mitchell averaged 31.3 points per game and became the all-time leading scorer in Harrison Central’s boys basketball history in the process. He also grabbed 7.6 rebounds, passed out 3.4 assists and posted 3.3 steals a night.

“Kobe is the best player in Harrison Central history and is on his way to being one of the best players in Ohio Valley history and in the state of Ohio,” Clifford said. “He faced a junk defense basically every night with two guys on him and still scored 31 points a game. He makes the right play, does everything for us and makes his teammates better.”

KELLY HENDERSHOT, Shadyside — This senior standout did more for the Tigers and Coach Ed Andes than there are spots on the stat sheet this season.

A four-year letterman, Hendershot put the finishing touches on a brilliant prep career by averaging 19.2 points a game. He finished with 1,469 career points and is the all-time leading male scorer in Shadyside history. He also collected six rebounds, shot 57 percent from the floor and 42 percent from 3-point land.

“Kelly’s accomplishments speak for themselves,” Andes said. “He kept getting better every year he played and he was more and more team oriented, which helped us to have a very good season. He faced all kinds of different defenses with teams keying on him, but he made the other guys around him better.”

KOREY BECKETT, Shadyside — This sophomore sharpshooter was a marksman from behind the 3-point line for Andes’ team this season.

Beckett was the Tigers’ second-leading scorer at 13.6 points a game. He made 61, 3-point goals this season.

“Korey really developed into a good shooter and became a guy that other teams were forced to be aware of,” Andes said. “His ability to stretch defenses really helped the other guys. We’re excited to have him back and we’re hoping he continues to make the strides he’s made the last two seasons.”

LUKE MERRITT, Union Local — This junior developed into a go-to-guy for the Jets and head coach Zach Delman.

Merritt — an adept 3-point shooter — knocked down 93 bonus goals this winter and finished with an 18.8 points per game average. He also collected 3.4 rebounds, passed out 2 assists and shot 41 percent from behind the arc as well as 75 percent from the foul line.

“Luke is a model student-athlete,” Delman said. “He’s ranked near the top of his class academically and he’s always getting in extra shots with the shooting machine or lifting weights to gain an edge. He had a really big season and proved to be one of the deadliest shooters in the area.”

NATE MEYER, Union Local — This junior was deemed a “Swiss Army knife” by Delman for his willingness and ability to do whatever needed to help the team.

“Nate’s willing to do whatever it takes to help the team,” Delman said. “Whether it was diving for every loose ball, taking on guys twice his size for rebounds or taking countless charges, he did it all. After every game, there’s never a doubt about his effort.”

The 6-5 swing player averaged 16.6 points a game, while shooting 55 percent from the field. He also collected 7.7 rebounds and swatted 2.3 shots a game.

“Logan made major strides this season, becoming one of the premier players in our area,” Edwards said. “He’s not just an unselfish offensive player who can play inside or outside, but he can also guard any position on the floor. He does so many things for our team that do not even show up on the stat sheets. He’s a great leader on and off the court.”

NATE HARRIS, St. Clairsville — This Red Devil senior was the leader and catalyst for Coach Ryan Clifford’s team this season.

The 5-7 senior played much bigger than his frame, averaging 17 points a game.

He was named All-District 12 and All-Eastern District and recognized on the All-Ohio squad.

“While Nate was our leading scorer, his contribution to the team went well beyond his scoring,” Clifford said. “He was the heart-and-soul of our team. He will be extremely missed by our program.”

BRETT VIKE, St. Clairsville — This senior, through his mental preparation and knowledge, was like a coach on the floor for the Red Devils and Ryan Clifford.

On top of his knowledge of the opponent and game, Vike could score the ball, too. He did so at a 15 points per game clip.

Vike was named All-District 12 and to the All-Eastern District team.

“Brett is a very intelligent kid and his knowledge of the game plan and scouting report was a real blueprint for our younger kids on how to prepare,” Clifford said. “It was that type of leadership that was extremely valuable for an inexperienced team.”

TRENTON WILSON, Bellaire — This senior was a model of consistency for the Big Reds and head coach J.R. Battista.

Wilson was a nightly double-double quite literally. He averaged 17 points and 10 rebounds a game, leading the team in both categories.

“Trenton is a good kid and a great student who had a productive senior year for us,” Battista said. “He will be a success in his future endeavors.”

Mayle averaged 10.4 points, 5.3 rebounds and 3.3 assists this winter en route to honors on the Eastern District and District 5 teams.

“Jake stepped up and had a strong season,” Heaton said. “He was able to impact the game on both ends of the court. I feel he’s one of the better shooters in the area and I’m excited to see what the future holds for him and our program.”

RIESE O’KERNICK, Bridgeport — This junior was a bright spot for the Bulldogs and head coach Donnie Cash this season.

O’Kernick averaged a team-best 11 points a game en route to being recognized as All-District 12 and Special Mention All-Eastern District.

“Riese showed some signs this year, but he still has to be more consistent,” Cash said. “We need him to get better this offseason. He has the potential to have a good senior year.”

DAKOTA PHILLIPS, Beallsville — This senior did a little bit of everything for Coach Rick Jarrett’s Blue Devils.

Phillips averaged 16.7 points a game, 8.1 rebounds, 3.5 assists and 2 steals per game en route to being recognized all-District 12 and All-Eastern District.

“Dakota was a playmaker for our team,” Jarrett said. “He could shoot outside and really drive to the basket. He used his quickness on defense, which he played extremely well. It’s been a pleasure to coach Dakota and watch him improve each year.”

STONE THOMPSON, River — This Pilot senior saw his game evolve this season, which was a big part of the success he experienced for Coach Mark Romick’s team.

Thompson averaged 13.2 points and 3 rebounds per game this season en route to being named All-District 12 and Second Team All-Eastern District.

“Stone was our main outside scoring threat and developed the ability to score off the dribble and in the post,” Romick said.

TALIN BABCOCK, Monroe Central — This Seminoles senior served as the on and off-court leader for Coach Jon Perkins’ team.

Babcock averaged 12.6 points, 4.3 rebounds, 2.7 steals and 1.4 steals en route to being recognized as All-District 12 and on the All-Eastern District team.

“Talin’s experience, energy and work ethic were catalysts for the success we experienced this season,” Perkins said. “He is truly an unselfish player and never cared about his personal stats, but he always placed the team first.”

MARSHALL TAYLOR, Linsly — This senior put forth a brilliant season for the Cadets and head coach Dave Wojcik.

Taylor scored at a 19.1 points per game clip and yanked down 9.1 rebounds a contest. He didn’t stop there. He handed out 3.2 assists and had 2.3 steals a contest.

“Marshall had one of the best seasons a player could imagine,” Wojcik said. “We asked a lot of him on both ends of the court. He usually guarded the best player and we asked him to score for us as well. He had a terrific four-year career at Linsly, capping it off by scoring 42 points in a win over Weir. It was a pleasure to have coached him for the one year and wished I could have had him for another year, but he’s going to move on and play collegiately.”

ZACH DELMAN, Union Local — This head coach put forth a season that far exceeded many of the expectations that surrounded his Jets and did so after starting the season 1-4.

The Jets, who were underclass dominated, finished with a 17-7 record and played in the OVAC 3A title game for the second time under Delman’s watch.

“Going into the season, I had a lot of questions that I didn’t have answers for after we spent all summer mixing and matching lineups looking for what we felt gave us the best chance at success,” Delman said. “Honestly, I felt we were a year away from being pretty good, so winning 17 games was probably the most enjoyable experience of my head-coaching career. I was proud of how our guys stuck together after a 1-4 start to beat the odds and become one of the area’s better teams.”