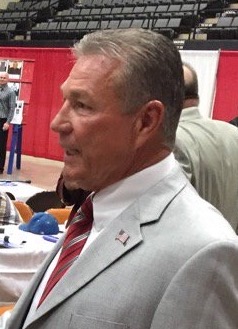 MARTINS FERRY — Rich Weiskircher has been retired from coaching for several years. The honors, however, continue to roll in for the former Martins Ferry High School grid star.

Weiskircher enjoyed a successful two-decade run as head grid coach at Marysville High, located just outside of Columbus. He coached the Monarchs from 1987-2006, compiling a 122-80 record with five OHSAA playoff berths.

The 1969 Purple Rider grad was recently bestowed another impressive honor. He was selected for induction into the Central District Football Coaches Association Hall of Fame.

This marks the third hall of fame for Weiskircher, already enshrined in the Martins Ferry High and Marysville High halls.

“It is a really nice honor to go into the Central District Hall of Fame. There was a lot of competition in the Ohio Capital Conference,” Weiskircher said. “When I first got to Marysville, we were a small D-III school. When I retired, it was a D-I school. We went through a lot of growing pains but it was a lot of fun.

“We didn’t have a lot of success early on. We were competing against schools like Olentangy and Dublin, when they only had one high school, in the Central Buckeye League,” he added. “We also had to learn how to compete against inner city schools. It was interesting. There was a lot of transition in Central Ohio during my time at Marysville.”

To help turn the Monarchs into winners, he returned to his roots. Weiskircher implemented some of the things he learned at Martins Ferry.

“We really emphasized the weight room. I took a lot of that from Bob Bruney (Ferry head coach in the mid 1970s). I learned a great deal from him,” Weiskircher said. ” We had a great staff at Ferry back then. We had Dave Bruney, Vince Suriano and John Magistro. We all went onto successful head coaching careers.

“I also learned a lot from Woody Hayes,” he added. “I never missed an Ohio State football clinic.”

“Marysville was a school with a lot of tough kids. They were hard-nosed, solid and competitive,” Weiskircher, now age 68, said. “They just never scored a lot of points. So we switched to the Wing T, taking advantage of our players’ strengths.

“We knew we had to play tough, aggressive football and play good defense,” he added. “Everyone bought in and things worked out well.”

Weiskircher energized a downtrodden Monarch program for the long haul.

In 1991, he guided Marysville to its first playoff berth in school annals, compiling an 11-2 record while also winning the Ohio Capital Conference championship. He directed the Monarchs to a perfect 10-0 regular season in 1999, the first time the program had achieved that since 1957. A year later, Marysville captured the OCC and regional championships, advancing to the state semifinals. The Monarchs won 13 games that fall.

Weiskircher launched what would prove to be 40-year coaching career as a Purple Rider grid assistant in 1974. He also served as Ferry head girls’ basketball coach.

His Purple Rider grid apprenticeship landed him the head coaching post at Buckeye North, a consolidation of Brilliant and Smithfield high schools. His three-year run (1984-86) as Huskies’ head coach was nothing short of remarkable. Weiskircher guided North to a 28-4 record, gaining two state playoff berths.

“When I first went to Buckeye North, we had a meeting and only had 14 players showed up, mostly the kids from Brilliant,” Weiskircher said. “So we drove around the Smithfield area putting signs on telephone poles, trying to get players out for the program. We ended up with 40. Everything came together quite well.

“We had some super talent at North. I was also fortunate to have a great staff,” he added. “The community really supported the program. It was a great time there.”

Weiskircher was a star quarterback and safety for Martins Ferry, while also excelling in track & field. His Purple Rider grid exploits earned him a scholarship to WVU.

He earned three letters while playing for Bobby Bowden’s Mountaineers. He was two-year starter at cornerback.

“I was originally going to Akron. But Hayden Buckley was on the WVU staff. He was from Martins Ferry,” Weiskircher said. “He told me they needed secondary help and that they had a scholarship for me. So I ended up at Morgantown thanks to Coach Buckley.

“WVU was very interesting. I had to adjust to a talent level I wasn’t used to. But I set my mind that I would work very hard, and things went well,” he noted. “My time there was made easier with having local guys like Ron Pobolish (Dillonvale), Terry Snively (Powhatan) and Mike Sherwood (Bellaire) already down there.

Once Weiskircher retired from his Marysville head grid post, he opted to become a part of the Ohio State coaching staff in 2007. He handled many different duties such as program assistant (football recruiting and academics); academic encourager for football (2008-2012); and academic assistant for football (2012-2014).

“Football has been very good to me,” Weiskircher closed. “I started playing the game back in the fourth grade at (Martins Ferry) St. Mary’s.”