Gamble finds his passion with MMA 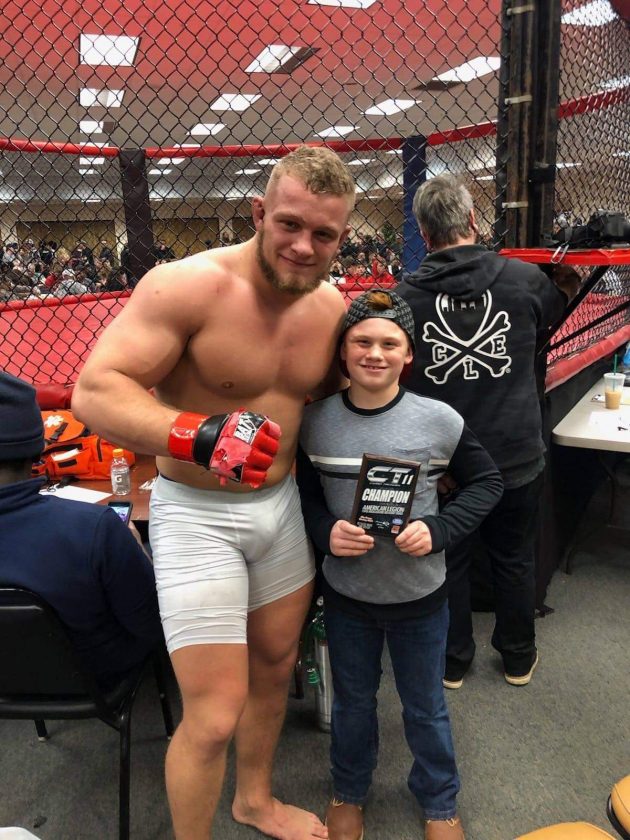 CODY GAMBLE, a 2019 graduate of Harrison Central High School, is pictured with his 9-year-old nephew, Colt Gamble, prior to Cody’s Mixed Martial Arts debut on March 7 at the American Legion in Kent, Ohio.

SCIO — College isn’t for everybody. Cody Gamble can attest to that.

A two-sport standout in football and wrestling at Harrison Central, the 2019 graduate had no desire to continue his academic career following high school.

“I didn’t have a major lined up and I really didn’t want to continue hitting the books,” Gamble admitted. “I had one Division I football offer from a school in Massachusetts, but I wasn’t really interested.”

Having trained at Route 250 Crosstraining for several years lifting weights and working on his conditioning, the 19-year-old was introduced to Andrew Law who is a professional mixed martial arts fighter from the Dover-New Philadelphia area.

“Right after I finished my high school football career by playing in the OVAC All-Star Game, I started training with Coach Law. He asked if I wanted to take some MMA classes,” Gamble recalled of his start in the octagon. “I really liked it. I fell in love with it and now it’s my passion.”

After 6-7 months of training, Law thought Gamble was ready to step into the cage.

“We found a promoter and I signed a contract to fight on March 7 in “Caged Thunder” at the American Legion in Kent,” Gamble said. “Usually when a fighter is making his debut he try and match him up with another debuting fighter, but they couldn’t find anyone in my weight class.

“I went through a 8-9 week camp and got in the best shape I’ve ever been in,” Gamble continued. “Coach Law got me into yoga and that made me more agile and flexible.”

An opponent was finally found in heavyweight James Dodd, a 27-year-old from California with a 1-0 record. He held a purple belt in Jiu Jitsu.

However, he was no match for the former Huskie who won by submission in a mere 2-minutes, 20-seconds. The ending came via a powerful neck crank.

“He was more of a ground-and-pounder fighter that liked to try and get you to submit,” Gamble added. “He had done some kick boxing, but my wrestling background really helped me out.”

Gamble said the most an amateur heavyweight can weigh is 265. He tips the scale at a robust 250.

“I had some weird nerves going into the bout,” he admitted. “I felt confident, but no overconfident.”

He had plans of fighting again in the near future, but with much of the nation shut down due to the coronavirus, his next fight is currently on hold.

“It’s a struggle right now for a lot of people,” Gamble noted. “Especially the smaller organizations. I didn’t have anything lined up right away, so now we’re just playing the waiting game.”

After earning all-Eastern District honors in football his senior season, Gamble placed third in the OVAC Ron Mauck wrestling tournament and won the Claymont Division II sectional. However, after defeating St. Clairsville’s Trey Delguzzo in his district tournament opener, Gamble suffered a broken tibia against Columbus DeSales Cole Potts in the second round, ending his fine season — and career — at 39-9.