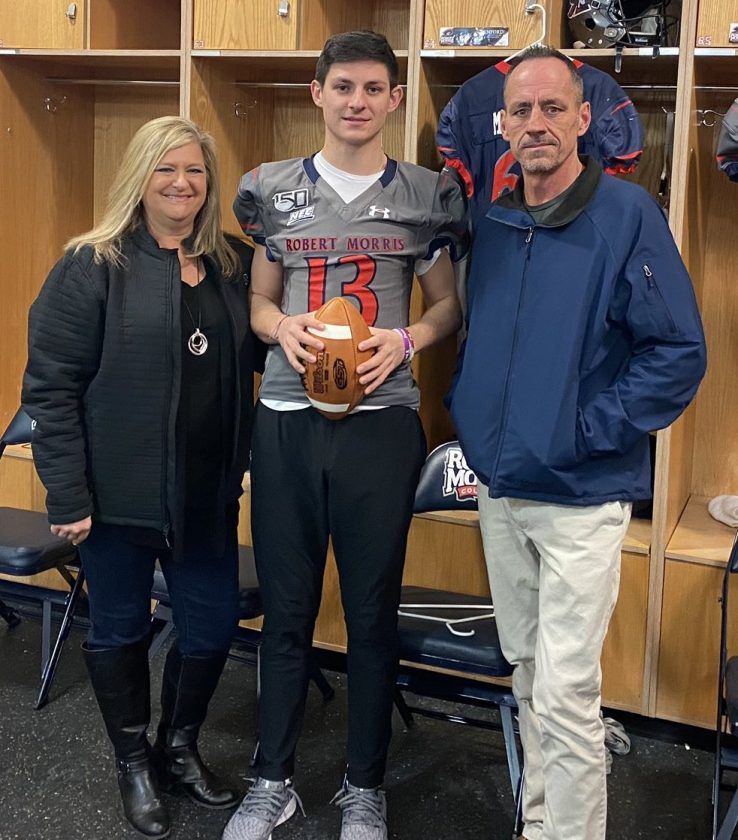 Anthony Chiccitt is that and so much more.

Chiccitt is a senior at Bethel Park High in suburban Pittsburgh. He is also a three-sports star who attracted heavy attention from college football recruiters before serious adversity entered his world.

A year ago at this time, Chiccitt was fighting for his life. He was diagnosed with Hodgkin lymphoma last February. A college football career at quarterback, as well as the Black Hawks looming baseball season, were blindsided.

Rather, he had the ultimate life-or-death battle on his hands. After extensive chemotherapy treatments, Chiccitt received word this summer that he had beaten the deadly disease.

With a clean bill of health, the 6-2, 180-pounder set his sights on again leading the Black Hawks on the gridiron. Just like his fight against cancer, Chiccitt came thorugh with flying colors.

He helped lead Bethel Park to the WPIAL Class 5A quarterfinals. Chiccitt completed 95-of-135 passes (71 percent) for 1,082 yards and eight TDs.

His sparkling season did not go unnoticed by college recruiters. Chiccitt will continue his grid career at nearby Robert Morris University, an NCAA D-I institution.

“It was definitely shocking, but initially I took it pretty well when my parents told me. I was strong and so were they, but as soon as I was by myself, my parents broke down. I immediately began to fight this cancer with everything I had, both mentally and physically,” Chiccitt said. “The treatments got progressively worse and were easily the toughest thing I’ve had to do in my life.

“I did four cycles that consisted of all-day chemo on Mondays, Tuesdays and Wednesday. Then my dad gave me a shot at home Thursday and I would go back Monday for a short chemo,” he noted. “Then I was off 13 days. I repeated that for three more cycles. The last two cycles were the worst and physically broke me down. I also had a two surgeries to remove two lymph nodes, one before chemo treatment started and one June 18 under my right arm.”

Chiccitt’s handling of the intense treatment was nothing short of miraculous. He was able to return to the Bethel Park baseball team that spring. Amazingly, Chiccitt hit at a .330 clip despite still undergoing chemotherapy treatments.

“It was awesome to still be able to play baseball that spring and it kept me feeling some sort of normal. I was able to have my baseball season routine every day with my friends and teammates,” Chiccitt beamed. “It was so great to be able to do that while going through chemo treatments. And to top it off, we won the section title for the second year in a row which was awesome. We made it to quarterfinals in the playoffs.”

His impressive comeback in baseball, along with several more months of recovery time, provided a solid foundation for his return as Bethel Park’s starting quarterback. It was a season that yielded team success and personal satisfaction for the gutty gridder.

“It (football) was a great year, although we didn’t accomplish the ultimate goal of a championship. We advanced to the quarterfinals in the playoffs. I had my best year so far and had a lot of fun,” Chiccitt said. “There is nothing like Friday Night Lights and it was awesome to be able to get back on the field to play football with my best friends. It is something that we have been doing together since we were 6-years-old.”

Chiccitt was also a starter on the Bethel Park hoop team and led the Black Hawks into a deep WPIAL post-season run. He is poised for another banner season on the prep diamond with college football definitely clearly in focus.

“I am excited to play (football) at the next level at Robert Morris University. I wanted to play at the highest level possible and I am humbled to be able to do that,” Chiccitt stated. “It was my ultimate goal to play D1 football and I am accomplishing that goal, which is awesome considering everything that happened. I believe I have my best football ahead of me as a Colonial.”

BRYAN NARDO, after a successful tenure as defensive coordinator at D-II Emporia State, has accepted a position with Youngstown State University. The Penguins compete in the NCAA D-I Football Championship Subdivision and are members of the Missouri Valley Conference.

Nardo will be charged with coaching the YSU linebackers. The former three-sport St. John Central standout guided the Emporia defense for eight seasons.

“Going to Emporia State is without a doubt one of the best things I have ever done. First and foremost, going there allowed me to meet my wife Emma and now we have Dominick, so I can’t think of anything else that tops those two additions to my life,” Nardo said. “Professionally, I can’t thank Coach Higgins enough for giving me the opportunity to come work for and learn under him for the last eight years.

“Youngstown State was a no brainer for me. There are countless reasons on why this is an incredible spot. This is historically one of the best football programs in the country, competing in the best FCS conference in the country,” he continued. “We have an opportunity to build something special here and add to the tradition of excellence at Youngstown State.”

Prior to his Emporia stint, Nardo served as special teams coordinator and linebacker coach at Missouri Science & Technology, members of the Great Lakes Football Conference.

After his playing days at SJC, Nardo opted to continue his education at Ohio University. While not possessing D-I physical talent, he did want to stay part of the game. Thus, he became a four-year volunteer grid aide, focusing on defense. After collecting his Ohio U. diploma, Nardo landed a position as running backs coach at Southwest Minnesota State. His stay in the Land of 10,000 Lakes was a short one, securing a three-year graduate assistant’s job at Ohio U. in June of 2008.

Featured speaker will Rich Donnelly. The Steubenville native has coached at the Major League Baseball level for several teams, and owns a World Series ring while assisting Jim Leyland with the Florida Marlins. He also has a best-selling book – “The Chicken Runs at Midnight.”

In conjunction with the banquet, the Martins Ferry Chamber is selling copies of that book at a reduced price. Book sales are moving briskly. For more information on the banquet or the book, call the chamber office at 740-633-2565.

THE FOX Walk to the Future for Parkinson’s Research will be staged Saturday, May 16 at Red Devil Stadium in St. Clairsville.

The walk begins at 4 p.m. at the fieldhouse end of the track. The event will also feature the Angels All-Star Academy Cheering Session and the Delay the Disease Parkinson’s Boot Camp, both on tap at 4:30 p.m. There will be food for purchase donated by Abbey’s Restaurant and Ideal Provisions. Music, raffles, prizes and games will also be featured.

The walk raises awareness and funds for Parkinson’s Research. Checks should be made payable to the Michael J. Fox Foundation for Parkinson’s research. Donate online at https://fundraise.michaeljfox.org/tf-2020/foxwalktothefuture

IT WAS great to see Russell Hutchins inducted into the Wheeling Park Athletic Hall of Fame last weekend. The former Bellaire High grid standout did wonders coaching the Patriots’ soccer and track teams. Russell and I were Little League teammates with the Indians. He was the catcher and I played second base. Current Ohio State Rep. Jack Cera was our left fielder.

FOURTH GRADE boys interested in playing for a travel basketball team in March and April are asked to contact Dave Koehler at 740-340-7078.

MICHELLE (BIELANSKI) Filander has her Austin College women’s basketball team rolling this season. The Texas-based Kangaroos are 21-4 on the campaign. Filander is a 1997 St. John Central grad, earning all-Ohio honors two seasons. She scored 1,436 points for the Lady Irish, winning three OVAC team title along the way. She earned a hoop scholarship to Robert Morris.

DR. CHELSEY Fletcher has tendered her resignation as Toronto High’s athletic director. She did her job with great professionalism and class. Dr. Fletcher also was a huge help with OVAC volleyball. She will be missed.

OUR THOUGHTS and prayers go out to Caldwell High cross country and track coach Dugan Hill. The legendary coach recently underwent a heart catherization. When it comes to distance running, there is no better tutor than Dugan Hill.

RYLEE RODICH is a talented junior gymnast at Sheridan High in Thornville. She and her General teammates competed this weekend in the Ohio State Gymnastics Championships at Hilliard Bradley. Rylee is the daughter of Mike Rodich, a former hoop star at Cadiz High and Marietta College. He is currently a Sheridan Middle School principal.

JOANNA (BERNABEI) McNamee closes out regular-season play today as Boston College visits Syracuse. McNamee, in her second season at the BC helm, has her Eagles soaring at 17-11. The Weirton Madonna product took over a program that won just six games. 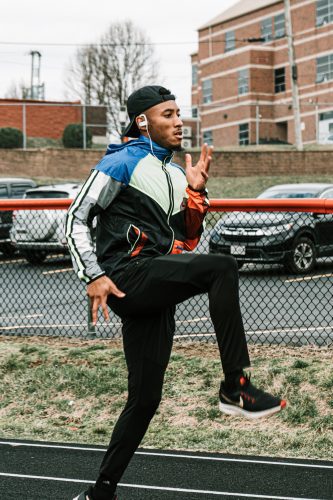