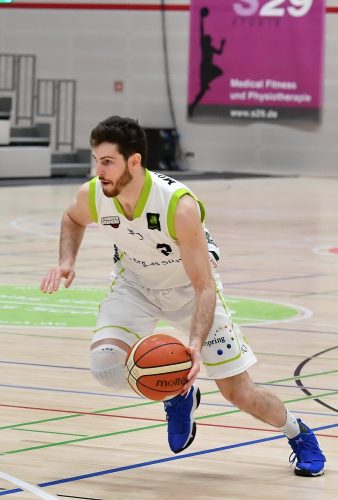 Photo Provided ST. CLAIRSVILLE graduate Dan Monteroso is returning to Germany to play in the German Pro A League. He will play for the Trier Gladiators, which is the team that he was playing against when he tore his ACL.

ST. CLAIRSVILLE — For probably the first time in his athletic career, Dan Monteroso found himself at a crossroads.

As he’s worked to come back from a serious knee injury, Monteroso had to make a decision whether or not continuing to play professional basketball overseas or starting to focus on beginning the next chapter of his life would the best decision.

Going back and forth in his mind and weighing the pros and cons, Monteroso turned to his fiance, Brooke Cenkus, for additional advice.

“(The injury) really took a toll on me mentally and Brooke really helped a ton,” Monteroso said. “I was honestly thinking about being done (with playing), but she pushed me and wanted me to go back because she knew I still had a passion for it. She pointed out some of the little things that I hadn’t thought about, which helped, too.”

Monteroso — a former St. Clairsville and West Liberty standout — didn’t just let Cenkus’ advice go in one ear and out the other. Earlier this month, he formally signed a two-year contact with the Trier Gladiators of the German Pro-A League. He was the first player the team has signed for the 2020-21 season.

“Trier is a really good team and organization,” Monteroso said. “This offer is a huge jump for me. It’s an awesome team, arena and organization. I honestly think we’ll have a good shot to compete for the league championship.”

Monteroso underwent surgery on his right knee on Dec. 7 at Ohio State University’s Wexner Medical Center. That procedure came less than two months after he sustained the torn ACL in what was just the seventh game of the season.

Ironically, the injury he sustained occurred during a game against Trier.

“It’s kind of funny that they decided to sign me after I had gotten hurt against them,” Monteroso said.

During his prep, collegiate and professional careers, Monteroso has had many memorable games and plays. But, that shot he went up for against Trier last season will be one that he remembers forever.

“I landed and I knew I tore my ACL immediately,” Monteroso said. “The trainer and doctor put my through the test in the locker room, but the doctor kept saying, ‘let’s wait until we get an MRI,’ but the trainer was honest.”

The MRI proved what Monteroso already knew. A complete tear. He was given the option to return to the United States and have the surgery done or have it done in Germany. He elected to head back home.

“The organization (Ehingen Urspring) got me a flight home,” Monteroso explained. “My insurance through the team covered the medical bills, and I’ve received the terms of my contract (financially), so those organizations do help you out.”

The injury spoiled what had started as a really strong season for Monteroso. He was averaging 11 points, four rebounds and three assists.

“I was playing really well, and I was kind of hoping that if I continued to play like that, I’d make a jump into a bigger and better league,” Monteroso said.

Now, Monteroso will instead strictly focus on getting ready physically and hope to pick up where he left off.

Almost six months removed from surgery, Monteroso is getting back to normal.

“I am feeling really good,” Monteroso said. “I am running, cutting and dunking the ball again. I’m not crazy explosive, but my straight-line speed is getting there. My side-to-side speed is not there yet.”

As he works toward fully regaining his athelticism, Monteroso has focused on the skill side of the game.

“I’m going to the gym every day and doing a ton of shooting,” Monteroso said. “Each day, I can feel myself getting better and better. Come August, I think I will be ready.”

As has been the case the last couple of seasons, Monteroso will depart for Germany in early August, barring any schedule changes due to the coronavirus pandemic.

“My knee will be ready by then, but with everything else going on in the world, I don’t know if that (departure) date will hold true or not, but that’s when it’s supposed to be, so I’m preparing for that,” Monteroso explained.

Monteroso admits he has no reservations about going to a foreign country during the pandemic.

“When it first hit, I thought (my injury) was kind of a blessing in disguise because I was thankful to be in the United States and not over in Germany,” Monteroso said. “I think we’re all kind of learning to live with it and I’m just doing everything I can to stay safe. I follow the advice that’s given. I’m not a med student, so I just do what people tell me to do.”

One way or another, Monteroso will find a way to get to camp later this summer.

“Whenever camp opens, I will be there even if I have to swim over,” Monteroso said. “I’ll find a way to get there.”