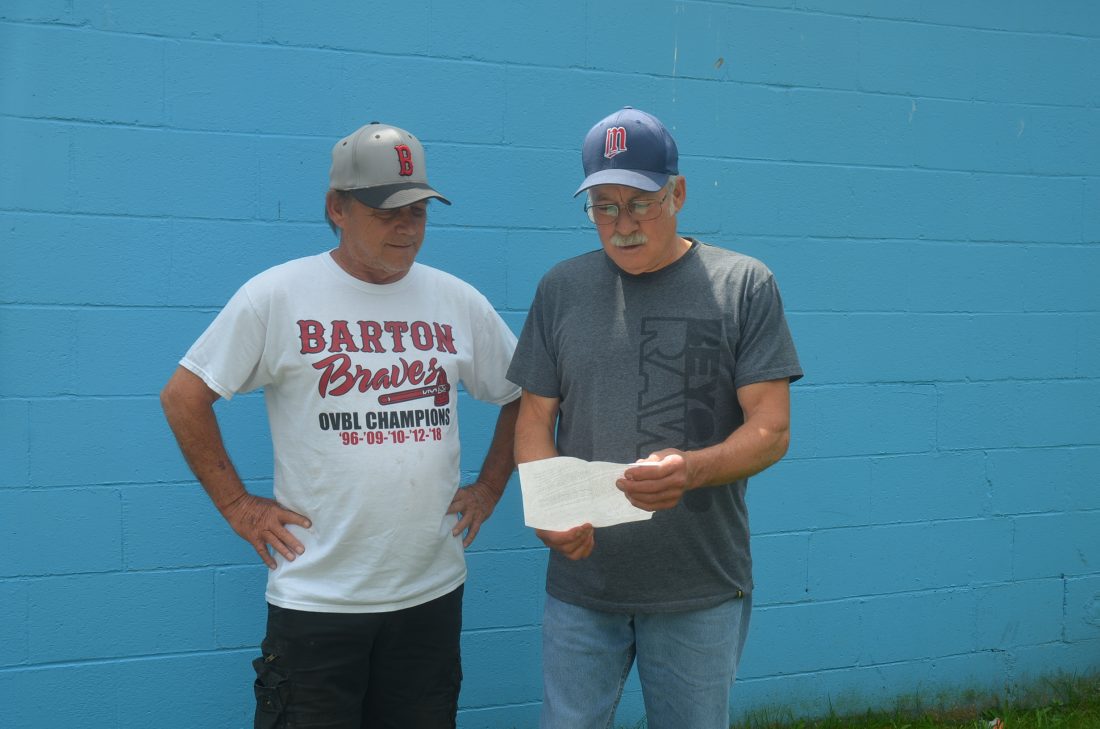 THE OHIO Valley Baseball League will begin play on Sunday, June 7 with a pair of doubleheaders. The league has four teams, two from Ohio and a pair from West Virginia. They include Barton and Maynard from the Buckeye State and Moundsville and Weirton from the Mountain State. Pictured are league vice president and veteran Barton manager Billy Timko, left, and league president Laney Simone Sr.

The Ohio Valley Baseball League will swing into action on Sunday, June 7, according to league president Laney Simone Sr.

The former Maynard manager said there are four teams in the league. They are the Barton Braves, Maynard Indians, Moundsville Expos and Weirton Bobcats. The Wheeling Cardinals ceased operations after winning the 2019 championship.

Each team will play an 18-game schedule, with games being played on Mondays, Wednesdays, Fridays and Sundays. Weekday games begin at 6 p.m., with Sunday games starting at 1.

A pair of doubleheaders will kick off the season as Maynard will host Moundsville and Weirton travels to Barton on opening day.

“We’re looking for a good summer of baseball after everything that has gone on around the country,” Simone Sr. said in reference to the global COVID-19 pandemic that has the league about a month behind its usual schedule.

“In talking to each of the managers, they all tell me their rosters are loaded with talent,” he added. “I guess we will see.”

The league will abide by guidelines set forth by Ohio Gov. Mike DeWine and West Virginia Gov. Jim Justice. Some of the guidelines vary in each state. Social distancing will be required for fans attending and when players are not on the field.

“We don’t want to do anything that could result in someone getting sick or in trouble,” Simone Sr. stressed.

He said each player will be required to sign a waiver prior to each game they are in uniform for, whether they participate in the game or not.

Barton will once again use Henning Field in Crescent for its home games, while Maynard will play at the village’s Community Park. Moundsville will use the John Marshall High School diamond and Weirton the downtown Edwin J. Bowman Field.

Billy Timko will once again return as manager of the Braves. He won his 300th OVBL game last summer while guiding Barton to the championship finals. David Vickers is back for his second season with Maynard. Jake Carnahan, an integral part of the Wheeling Cardinals’ lineup the past few seasons, is now in charge of the Moundsville unit. He is also the head baseball coach at Cameron High School. Jake Rosnick will lead Weirton.

According to Simone Sr., the regular season will end on Sunday, July 5, with Monday, July 6 and Tuesday, July 7 as makeup dates. The first-round of the playoffs, featuring the No. 1 team in the regular season against the No. 4 and the No. 2 vs. No. 3 in a best-of-3 format, will begin Thursday, July 9. Game 2 in each series will be played Friday, July 10, with a third-and-deciding game, if necessary, on Sunday, July 12. The two winners would then meet in the best-of-7 championship series which is set to start on Tuesday, July 14.

All of those dates are subject to adverse weather conditions and could change.

“I think there are a lot of guys out there that are ready to get on the field and play baseball,” Simone Sr. continued.