Buckeye’s Pielech to run at Wheeling U. 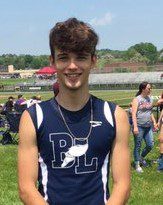 CONNORVILLE — Like all other spring sport athletes, Buckeye Local senior Jacob Pielech saw his prep sports career come to an end quite prematurely.

The Panthers track and field standout, though, was one of the fortunate ones to have been able to make a big enough mark in just three seasons he caught the attention of college coaches.

Because of that, Pielech will have the opportunity to continue his track and academic careers at Wheeling University.

Pielech settled on the Cardinals because they “pursued and recruited” him longer than any of the other schools in which he heard from.

“Personal contact wasn’t permitted (by the NCAA during the pandemic), but their emails, phone calls and texts were endless,” Pielech said. “Coach Jack Fitch led the recruiting and they really made me feel like they really wanted me there, and I am very grateful.”

Pielech expects to challenge as one of the Cardinals’ top 400 meter racers and he’ll also be in the mix to run on the 4×400 relay team.

“I need to continue to improve my strength,” Pielech said. “I have not had a lot of experience with weight training and I think that will help me a lot.”

Pielech exploded onto the scene in the lap dash during the 2019 track season. He was one of the top sprinters in the event in the OVAC. He posted a season-best time of 50.41. He was the OVAC Class 4A champion in the event.

He also qualified to run in the Division II state meet in the event. He was actually fifth in a very deep regional at Muskingum, but earned the right to compete in Columbus because of the OHSAA accepting an at-large qualifier.

Pielech didn’t have the type of sophomore season that he had envisioned, but he used it as motivation.

Before the COVID-19 pandemic and eventual cancellation of spring sports, Pielech appeared to be on his way to a fine final campaign. He had a strong indoor season and qualified to run in the OATCCC Indoor State Track Meet at Geneva’s Spire Institute.

Despite that accomplishment, many other achievements weren’t able to be fulfilled.

“I always had the goal of breaking the Buckeye Local school record in the 400, which is 49.9,” Pielech said. “My senior season was supposed to be the season that I finally reached this goal along with repeating as OVAC champion and returning to the state meet. It’s a shame that my high school career came to an end the way it did.”

Jacob, who is the son of Christine Suter and Dirk Pielech, plans to major in engineering science.