Faithful and true hearted: Stolz, Miller retiring after combining for over 90 years of coaching at Bellaire 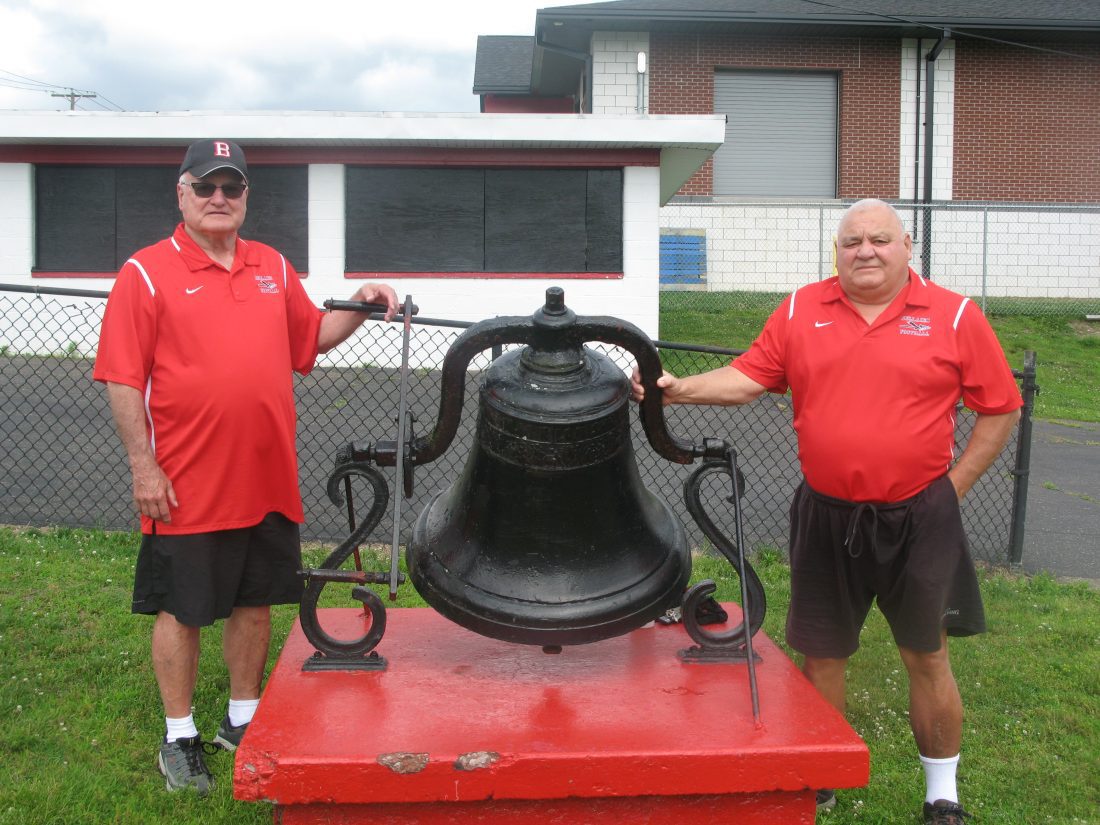 TWO LONGTIME Bellaire High coaches have announced plans to retire after combining for more than 90 years of service to Big Reds’ athletics. Pictured are Ed Miller, left, and Bruze Stolz.

As well they should.

Stolz and Miller have combined to coach more than 90 years with the Big Reds.

The veteran tandem has been a longtime and valuable fixture with the Bellaire football and track programs.

In fact, Stolz served as head coach of the Big Reds’ thinclads for 13 years, guiding his charges to 10 OVAC championships. In 1990, his Big Red boys’ team came within a botched 4X100 relay baton exchange of capturing the OHSAA Division II title, finishing eight points behind champion Youngstown Cardinal Mooney. Miller was one of Stolz’s track aides during that impressive run.

But all good things come to an end.

After their elongated and successful coaching tenures with the Big Reds, both have opted to call it quits to their respective coaching careers.

Stolz is a 1967 Bellaire High grad. He was a mainstay on the Big Reds 9-1 football juggernaut in his senior season. He continued his academic and football careers at Kent State and West Liberty University.

In addition to his successful tenure with the Big Reds’ thinclads, Stolz, age 71, has served as a football assistant for seven head coaches.

“I have been coaching football here for 50 years. The only places I have been in my life are Kent State, West Liberty and Bellaire,” Stolz said. “Growing up in Bellaire and coaching and teaching here, I don’t know if it could have been any better.”

Miller, meanwhile, is a Wheeling High grad. He also gained his college degree at West Liberty. The two became friends as members of the Hilltoppers’ grid team.

“One of my lasting impressions will always be the enthusiasm of the town and community. We would get here at nine in the morning for home games and there would be people waiting in line for the gates to open,” Miller said. “I remember one playoff game at Zanesville where they had to stop selling tickets because there were so many Bellaire people in line. Bellaire is a special place to teach and coach.”

After a half century of coaching on the Nelson Field sidelines, Stolz obviously harbors countless memories.

“I think the greatest experience may have been our first undefeated season in 1995. Unfortunately, my dad passed away a week later,” Stolz said. “That team and those that followed the next few years were dynamite. We had great players like Ben Taylor, Jose Davis and the Mamies. We also had really good linemen.

“It was so pleasant to coach those kids. They were very good players and very good kids,” he added. “Making it even better was coaching with my very good buddy, John (Magistro). We had a family affair with the coaches. The Bonar brothers were great and a lot of football coaches also coached track. We had great camaraderie.”

Speaking of a family affair, it went a step or two further for the highly-regarded line coach.

“I was fortunate to coach both my son and grandson here. That will always be special to me,” Stolz added.

Miller, who also had a son play for the Big Reds, also possesses many memories from his 43 years of Big Reds’ coaching.

“One of the things that sticks out for me is all those players who showed up everyday for practice and maybe got in for only three or four players a game. We had a lot of dedicated players who wanted to be part of a great program,” Miller said.

“One of the most lasting impressions came in 2012 when my wife died. Jose (Davis) was the coach then,” Miller said. “Jose brought the entire team to the funeral home to pay their respect. The emotion was amazing.

“We had family in from Detroit for the services. They said, ‘Ed this would never happen in Detroit,'” he added. “That outpouring of love and support is why I continued to coach.”

“Bellaire High School has been fortunate to have Bruce and Ed be a big part of our football program for so many years. As you look back, they have been the one constant in our program,” Bellaire High Athletic Director Mike Sherwood said. “Their longevity is something that you don’t often see. We appreciate their dedication to the school.”

Mark Spigarelli is the current Bellaire High head grid coach. His relationship with Stolz and Miller dates back decades as all three were assistants on Magistro’s staff.

“Coach Stolz and Coach Miller are two iconic assistant coaches who helped lead the Big Reds to back-to-back state runner-up finishes in 1995 and 1996. These guys were as truly honest, hard-working and dedicated coaches that you will ever find in the Ohio Valley. They both have coached at Bellaire High for over 40 years each. That shows how much passion they have for Big Reds,” Spigarelli said. “As they both enter their retirement, I want to thank them from the bottom of my heart for helping me achieve so many goals the last four years.”

And now with another prep football season drawing closer, what will it be like for two coaches who have devoted the past five decades to the sport without now being an active participant?

“It will definitely be strange but life goes on,” Miller offered. “There are always things that you want to do.”

“I miss it now. But life moves on. The season will not be the same. But I got other interests and I will get more time to spend with my wife,” Stolz said. “It was a good career and a good time. I have no regrets. It was a great ride.”