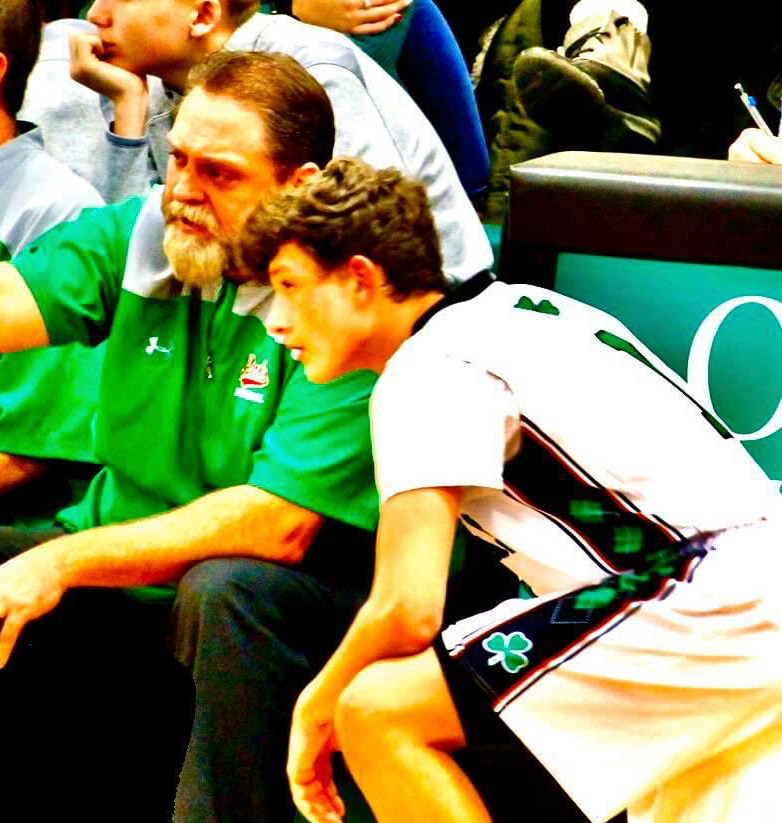 Photo Provided JOHNNY HINES gives instruction to his son, Colton, during a game last season. Hines was recently hired as the new head basketball coach at Barnesville after spending three seasons as one of Matt Johnson’s top assistants. Hines’ son will be a junior on the team this winter.

During last week’s board of education meeting, Johnny Hines, who had served as the chief assistant under Matt Johnson, was formally approved as the new head coach. Johnson stepped down in April after three seasons at the helm.

“This is a job I was absolutely interested in as soon as I knew Matt was resigning,” Hines said. “(Being a head coach) is an opportunity I’ve been seeking for a few years now. I am really excited to get started.”

Hines, 45, graduated from Shenandoah in 1993. There he played four years under Ohio High School Hall of Fame coach Dan Schwieterman. He then played at Ohio University Eastern before going to Ohio University-Zanesville.

Since his playing days, Hines has been involved in coaching at several levels in a variety of sports. Along with working with the Shamrocks the past few years, he spent a few years working with Barnesville’s junior high program and also the middle school program at Shenandoah.

“Between playing for Coach Schwieterman and working under Matt (at Barnesville) and Mark Smith (at Shenandoah), I’ve gained a lot of great things that I feel like I can blend together to help me as a head coach,” Hines said.

One area in which Hines really believes Johnson gave him the most valuable guidance was in terms of dealing with the players.

“How Matt connected and worked with the kids was something he did as well as anyone and seeing that was really beneficial for me,” Hines said. “Come heck or high water, Matt always stood behind these kids and that speaks volumes to his character.”

On the court, Shamrock fans can expect to see four core principles from Hines’ squad this winter.

“You won’t see glitz and glam, but you’re going to see gritty kids who play hard,” Hines said. “In every sport or level I’ve ever coached, I’ve had my teams live by the four principles of attitude, heart, hustle and effort. I told the kids there’s no secret sauce or magic potion. We’re going to work and continue to build this program.”

With COVID-19 paralyzing the usual very busy summer hoop scene, Hines and his assistant coaches, many of whom are holdovers from the 2019-20 Shamrock staff, are looking to get into the gym as allowed by the government and OHSAA.

“There had been talk that I was going to get the job, so I was kind of preparing and working behind the scenes, so that when it became official, we could start right in,” Hines explained. “We have a lot of ground root type things we need to do and we need to get acclimated with what we’re going to do.”

Obviously a big portion of that is figuring out where they’ll replace the more than 30 points a game that Luke Powell brought to the table.

“The old saying that you don’t replace a guy like that is especially true when you’re talking about Luke Powell,” Hines said. “We have a good core group back and a few other kids showing interest (in playing).”

Johnny and his wife Danelle live in Barnesville. Johnny is the father of four children — Justice Hines (25), Santana Hines (22), Colton Hines (16) and Gracie Hines (9). He also has a step son, Joshua Schnegg, who is in the Air Force.