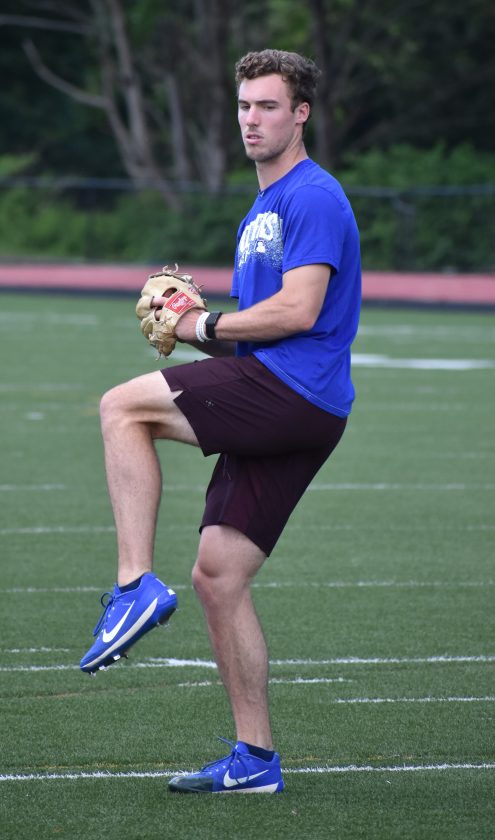 T-L Photo/SETH STASKEY MICHAEL GROVE, prospect for the Los Angeles Dodgers, goes through a workout Monday afternoon at Wheeling University. Grove, who is a Wheeling Park and West Virginia University graduate, reports today to begin ‘summer camp’ with the Dodgers as part of the organization’s 51-man roster.

WHEELING — For obvious reasons, Michael Grove had been following the baseball negotiations of the last several weeks quite closely.

The Wheeling Park and West Virginia University product, actually, predicted on June 18 that a deal — one way or another — would get done in five days. It turned out to be quite accurate as Commissioner Rob Manfred invoked his right, from a March agreement, to set a return date for Major League Baseball just four days later.

“Full disclosure … I had been saying within five days basically every five days,” Grove joked. “I got lucky this time.”

Regardless if it was luck or not, it worked out. Baseball is coming back. Players are actually beginning to report to their ‘summer camps’ today with plans of beginning the season in three weeks.

Though he was deeply hoping for an agreement, Grove openly said he didn’t know what a deal would mean for him because all indications are there will be no minor league season.

He learned last Tuesday what the 2020 season might entail for him. He received word from the Los Angeles Dodgers, who drafted him in the second round of the 2018 MLB Draft, that he was being placed on the team’s 60-man roster, which earned him a right to come to camp.

“It’s an awesome and exciting opportunity,” Grove said just before beginning his final workout in the Ohio Valley on Monday. “I am blessed to be one of the guys selected (for the roster) and I’m excited to be able to get into a competitive environment for this year and it’s not a wasted season.”

The Dodgers actually only announced a 51-man roster on Sunday. Of those, 40 are on the MLB roster, but only 30 will be active when the games begin. The remaining 11 players will continue to train and workout in the greater Los Angeles area and are basically on call.

“I am going out to compete,” Grove said. “I can’t control how they envision the season going for me, moving up or down, but I can control going out there and doing the right things and putting in the work.”

With a short season, concerns about COVID-19 and how it may impact the players and season, Grove knows that anyone who’s starting camp this week could have his number called at some point this season.

“It could definitely be a weird season, so my intention is just to continue to work because obviously anything can happen,” Grove said. “I am preparing as if I have a chance to play this year (for the Dodgers). For other guys’ sakes, hopefully that’s not the case, but for my sake, I have to continue to try to advance as much as I can.”

With guys like Clayton Kershaw and David Price headlining the rotation, the Dodgers’ pitching staff is stacked with quality and depth. So, when the season begins, Grove expects to be part of the group that is sent to the University of Southern California to continue to workout.

“The guys not on the 30-man (active) roster will go to a separate training site,” Grove said. “The schedule there will mirror the big-league schedule, so guys are ready to go up if needed.”

Grove flew out of Pittsburgh early Tuesday to Phoenix, which is where his car has been since baseball players were sent home from spring training in March because of the coronavirus pandemic. He was picking up his car and then beginning the almost six-hour drive to Los Angeles.

All players reporting today will be tested for COVID-19 and workouts are expected to commence on Friday.

Grove did admit that seeing his name listed with the likes of Kershaw, Price, Walker Buehler and Kenley Jansen was “definitely cool.”

“It’ll be awesome to be around those guys and learn from them,” Grove said. “Honestly, it doesn’t really matter who I am playing with and where as long as I am playing.”