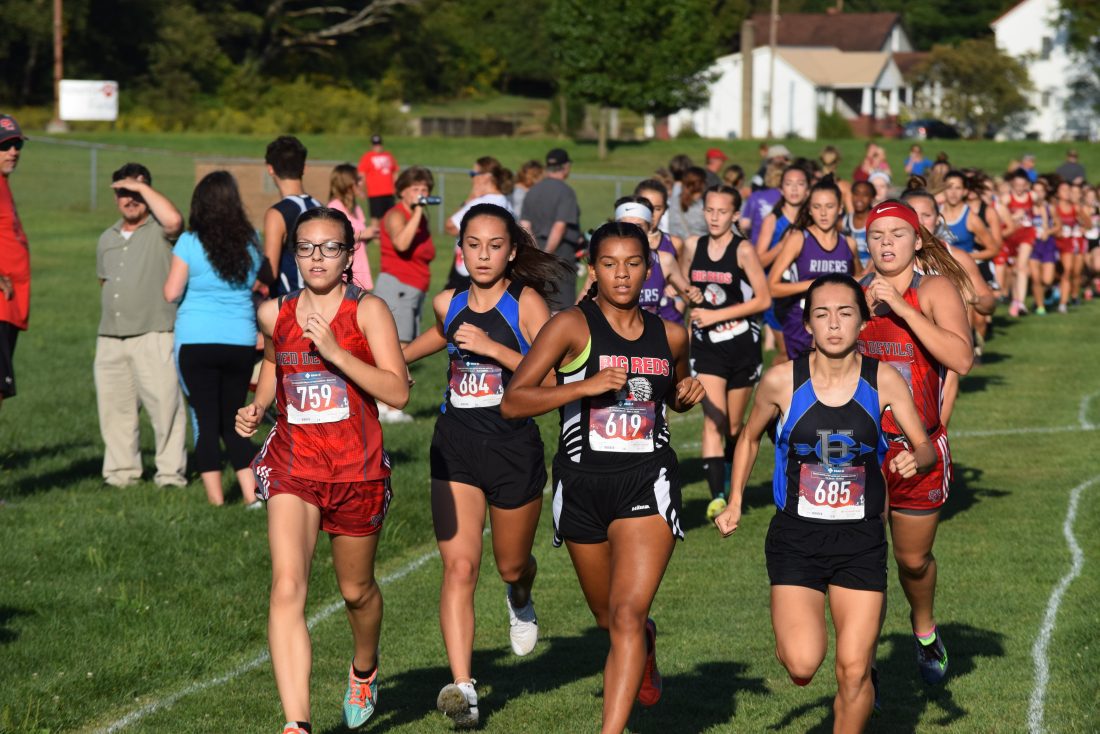 CONNORVILLE — Winning a league championship is a cause for excitement.

And the Martins Ferry Purple Riders were just that Wednesday afternoon upon learning that they had swept the Buckeye 8 Athletic League championhips at sun-splashed Buckeye Local High School.

Amid the excitement, however, head coach Chrissy Lewis wants to make sure her team remains even keeled since the calendar shows still four weeks until the OVAC and six week until the district championship.

“It’s a little early to gauge where we are because we’re still hoping for improvement as the season moves along,” Lewis said. “There have been times where we’ve flattened out during the middle of the season, so we have a tough time of seeing improvement at the end. That’s something we’re working on because our goal is still toward the end of the season.”

The Purple Rider boys produced every cross country coach’s dream … a pack. The Riders had all five of their scorers in the top 11 overall. Taking that a step farther, they had four of the five places from five to nine.

“At our last meet, we had three guys and then a break before our fourth runner, but this meet was really nice to have five guys to stretch it out,” Lewis said. “Our boys had a big (time) drop and the entire top five boys all ran tremendous.”

Harrison Central, which finished second in the team standings with 89 points, were fueled by a pair of all-league performers. Logan Laney was the runnerup in 17:11 and senior Eric Leech was fourth in 17:26.

Buckeye Local finished fourth and was led by Brody Cermak’s 10th-place finish in 18:09.

Bellaire, which was sixth in the team rankings with 163 points, is home to the Buckeye 8 champion. Jacob Defibaugh continued his storng early season with a solid 16:48 clocking to claim his first league title.

“I knew the pace was going to go out face, so I wanted to kind of run behind for a mile or so and then make a surge on the hill,” Defibaugh said. “I got down the hill and just tried to carry the momentum as long as I can toward the finish. I’ve set my goals high and I am focused on working toward those goals, taking it one meet at a time. It’s exciting to win this meet. It’s something that I’ve been thinking about for weeks, making mental notes on how I wanted to run it. I’ve prepared a lot for it.”

“The top five girls all ran really, really well,” Lewis said. “Like the boys, we’re hoping to continue to see improvement. The girls are a little more stretched out, but we had three right up in there (toward the front) and that’s nice to see.”

The Riders had three runners earn all-league. Josie Hancock was third overall in 20:57, while Chloe Hill was fifth in 21:13 and Hannah Hupp was seventh overall in 21:35.

St. Clairsville — by virtue of a sixth-place tiebreaker — finished second with 54 points. The Red Devils produced two all-league performers in Allyson Evonek, who was the meet runnerup in 20:46 and junior Maggie Marody, who was ninth in 21:43.

Bellaire also had a pair of runners earn all-league acclaim. Senior Katrina Davis was sixth in 21:30, while Bethany McElfresh was eighth in 21:41.

Harrison Central, which didn’t field an entire team, was fueled by the Sisters Arnold.

“I knew I wanted to get out to the lead because I wanted to be able to set my own pace,” Arnold said. “It played really well for me that way. Sometimes I have trouble staying with a pack, but I know I can push myself. I can get out and go at my own pace. I feel pretty good about where I am at this point. I didn’t run a personal record today, but with the heat and everything, I’ll take it.”

Destiny Arnold — also a returning state qualifier — was fourth in 21:06.