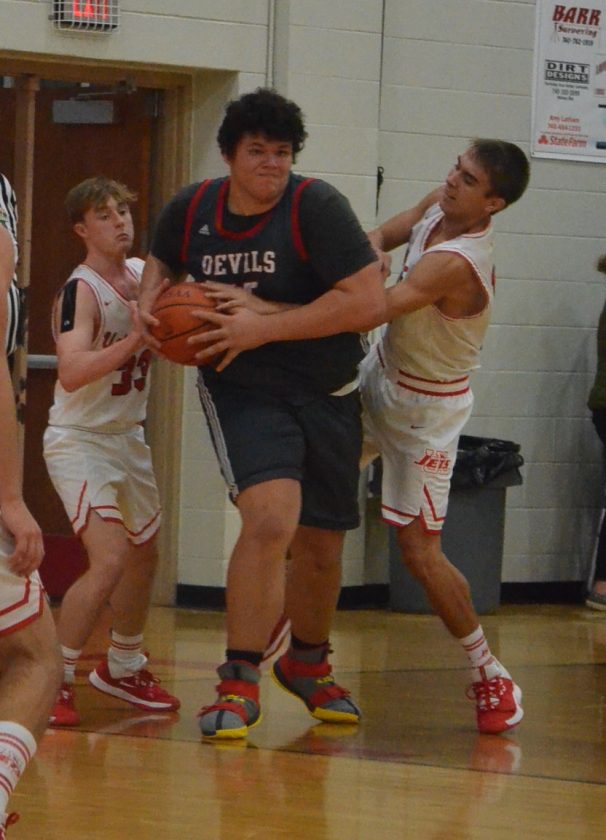 MORRISTOWN — St. Clairsville has had its share of troubles inside ‘The Hangar’ at Union Local High School. For one quarter Tuesday night, it appeared as though those troubles were going to continue as it shot 2-for-9 from the floor, had seven turnovers and trailed the host Jets 11-8.

However, after a very stern talking to by head coach Ryan Clifford during the break between quarters, the Red Devils came out a different team as it stormed back to post a 79-66 victory in Buckeye 8 South action.

“I got on them (the kids) pretty bad after the first quarter,” Clifford explained. “I just didn’t like the energy we were playing with. I didn’t like that we weren’t sharing the ball like we normally do. We’ve kind of become known for sharing the ball and we weren’t early, but to their credit they took the chewing at the end of the first quarter, and instead of feeling sorry for themselves they played better.

“We played lights-out in the second and third quarters,” he added. “That’s tough to do over here. We’ve come over here a lot of times and been in dogfights. That’s a credit to these kids. Some of these kids this is their first time getting a talking to like that. They stepped up and played fantastic.”

St. Clairsville blistered the nets for 25 second-quarter points to take a 33-23 advantage into the lockerroom at the half. Will Balgo drilled a pair of three-pointers to account for eight points in the period, while Brett Vike had eight Nate Harris netted seven.

To Union Local head coach Zach Delman, the second quarter was the difference in the game.

“We let them get out in transition. The (Brett) Vike kid leaked out well and they were able to get the ball to him for some easy buckets,” Delman added. “And we went ice-cold in the second quarter.”

Indeed the Jets did by evidence of their 5-for-16 effort from the floor.

“We’ve got to find other ways to score when our jump shots aren’t falling,” Delman advised.

Free throws were also a big factor as St. Clairsville meshed 24 of 33 compared to just 8 of 11 for Union Local.

“They got to the line 33 times to our 11. They tripled us at the free throw line and that was another big difference in the game,” Delman noted.

“You’re going to win a lot of games if you get that kind of scoring,” Clifford acknowledged. “It really makes us hard to guard. We moved the ball with such efficiency in the second and third quarters. That’s where the game was won.”

Union Local’s Luke Merritt led all scorers with 27 points, 17 of those coming in the fourth quarter when he knocked down four straight treys to keep the Jets alive. Andrew Martin came off the bench to add 17 and grab a team-high eight rebounds. Matt Bateman finished with nine markers. Zach Bateman had seven.

The Jets won an exciting JV game by a point as Liam Vinskovich completed a conventional three-point play with less than a second to play.