W.Va. 2/I-68 authority searching for support 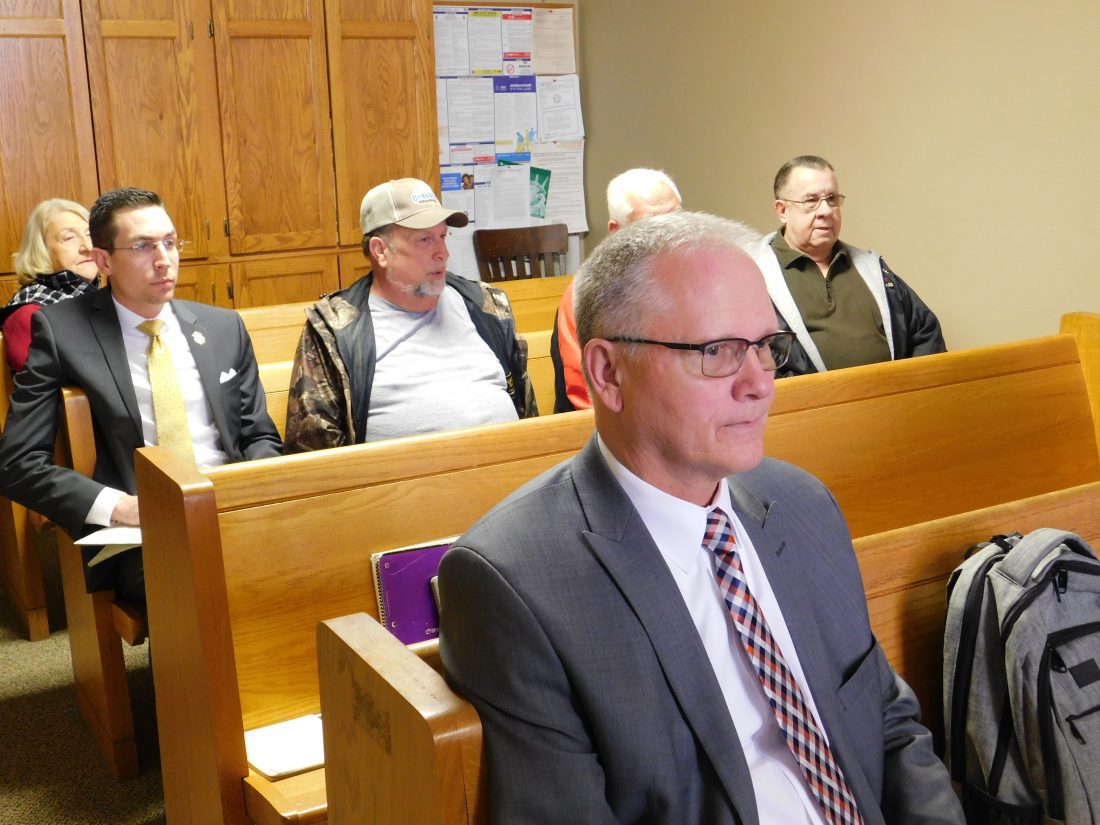 T-L Photo/ROBERT A. DEFRANK Bob Miller Jr., executive director of W.Va. 2/I-68 Authority, waits to speak Monday to the Monroe County Board of Commissioners. He is seeking local support for an economic impact study of a proposed connector road from I-79 near Morgantown to W.Va. 2 at the Ohio River.

WOODSFIELD — Monroe County commissioners will add their voices in support of a proposed “energy corridor” from Interstate 79 near Morgantown to W.Va. 2 at the Ohio River, near the proposed ethane cracker plant site in Belmont County.

Bob Miller Jr., executive director of the W.Va. 2/I-68 Authority, said the project has the potential to accelerate the economy and increase job creation. Miller said while the organization was formed in 1997, the abundant natural resources of the “Shale Crescent” region mean such a project would have a significant benefit to the economy. The next step is an economic impact study.

“I want your support,” he said. “That is why I’m here today, to try and get support in Ohio.”

“We just got approval from the West Virginia Department of Transportation to move forward with the economic impact study, and they suggested groups that we should meet with,” he said. “We’re trying to organize a meeting for this Friday down in Charleston with those groups. … That is the next major goal.”

Miller said there is no timeline or projected end date for the study. Authority members hope to meet with people including Sen. Charles H. Clements, R-Wetzel, who is also chairman of the Transportation Committee in West Virginia, Belomar Regional Council, the Morgantown Monongalia Metropolitan Planning Organization, and the West Virginia Department of Commerce.

“I won’t know anything ’til Friday, if they can give us a ballpark figure,” he said. “We’re still trying to contact all the parties to confirm they can make it to the meeting.”

“The Department of Transportation … normally does this internally, but because of what’s going on up here with the shale gas industry, they’ve indicated they wanted the Department of Commerce on board to help with the study because of the economics involved,” he said. “They both have funds to do studies like this, but I don’t know what the cost would be.”

Miller said he believes this project would benefit all involved, whether in Ohio or West Virginia.

“All boats will float in this economy if we all work together,” he said. “We’re hoping, with the president’s infrastructure bill, that there’ll be funding available (for an impact study).”

He hopes there may be multiple sources of funding available for construction of the corridor, but he said it is necessary to lay the groundwork locally.

“We have to start showing results with things like the economic impact study and getting the states on board to help encourage them to nail down if there is other unique funding for this project that doesn’t interfere with other state projects,” he said.

Nathan Lord, business manager with Shale Crescent USA, a nonprofit organization formed to encourage business growth along the Ohio River Valley, gave a presentation about the potential of the area’s natural resources and the utility of such a corridor. He emphasized the natural gas production taking place in Ohio, West Virginia and Pennsylvania, the three states that make up the Shale Crescent.

“If Ohio, West Virginia and Pennsylvania were their own country, they would be the third-largest natural gas producing country in the world,” Lord said. “In 2010 we produced 3 percent of the nation’s natural gas. Today we’re producing around 33 percent.”

He said the polyethylene plastic pellets that would be produced by a cracker plant have markets within a day’s drive of the Shale Crescent region.

“Is there adequate infrastructure? Do you guys have the infrastructure to support what’s going on? A lot of development’s going to take place along the river,” Lord said. “These projects take a long time to complete and we have to … put in place infrastructure now for the growth that we want to be seeing taking place over the next five to 10 years.”

“I assume everyone here has noticed a dramatic increase in traffic,” Miller said. “It’s like driving in a big city now, constantly.”

Commissioners Tim Price, Carl Davis and Mick Schumacher heard the presentation. Price said the potential of such a project was impressive and that the commissioners would likely draft a letter of support.

Observers included Eric Davis, an engineer with the planning department of the Ohio Department of Transportation District 10.

“We’re just here to gather information and see how far along they were,” he said. “I think it’s encouraging, and I think there’s room for Ohio to work with the other states to develop the area.”