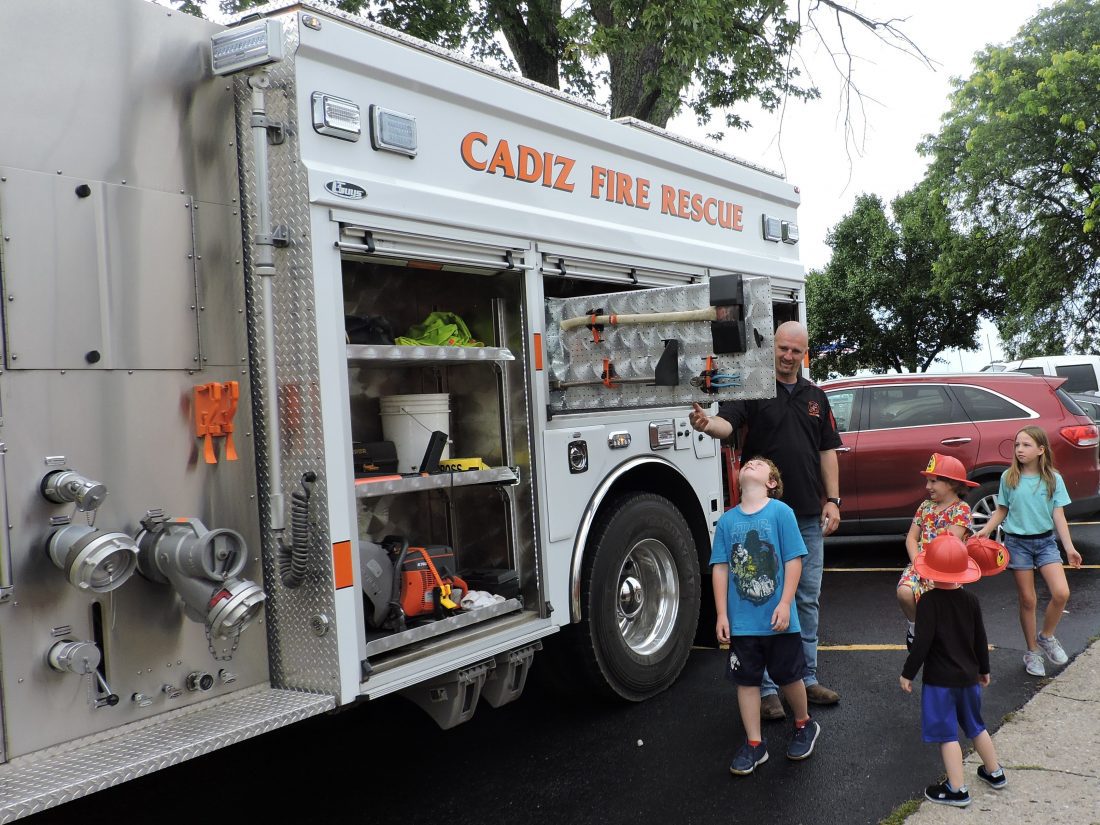 CADIZ — A local library recently held a program to teach children the importance of fire safety, and had fun doing so.

The Puskarich Public Library in Cadiz hosted the Cadiz Volunteer Fire Department Fire Safety Program on Tuesday evening. Ashley Smith, children’s librarian at the Puskarich Public Library, said that in previous years the fire safety program was held concurrent with the library’s summer reading program. However, this year, due to a scheduling conflict, this year’s event is a CVFD program.

“This is one of my favorite programs,” Smith said of the event.

Prior to the program’s start, 9-year-old Eva Smith, Smith’s daughter, said she was anticipating and excited about being able to inspect the fire department’s ladder truck that sat in the library’s parking lot.

Fire Chief Assistant John Vermillion and his 15-year-old son Jonathan, a junior firefighter, led the safety event. The elder Vermillion began with giving some background information on the department.

“We’ve been in service since 1869,” Vermillion said of the CVFD. “We run off about 30 members. We do a lot of car wrecks, house fires and we also get to get out into the public and have fun like we are tonight.”

Vermillion went on to talk about the “junior and senior departments.” The junior department is ages 14 to 18 and includes responsibilities like attending every call, aiding the senior firefighters, directing traffic during vehicle accidents and community service, he said.

“At 14 you can join the Junior Fire Department. You can’t start fighting fire until you’re at least 20 years old. … We’re always looking for people to join,” he said. “You can always be a firefighter and not fight fires. There’s always a spot in the fire department for anybody, we can always find something to do.”

Vermillion then had his son dress in head-to-toe safety gear, to show the kids in attendance to not be fearful of firefighters.

He said that he had his son don the attire in front of children so they can see that it’s still the same person before and after the gear is on. Vermillion said that he wanted the kids to understand what firefighters look like and to be unafraid when seen.

One boy remarked that Jonathan sounded like Star War’s fictional character Darth Vador, when speaking with the mask on. Others giggled and agreed.

Once the junior. fire fighter was completely suited up, Vermillion told the children to think of the gear as a Halloween costume. Kids intently watched and listened as Vermillion spoke to them. The fire chief assistant explained each component of the gear along with safety tips.

“When there is a fire in your house, you guys want to get low to the ground, find an exit. The reason we want to make sure he looked like this for you tonight, is so you understand when he shows up (at your house), it’s just like Halloween, dressed up and there to save you and get you out,” he said.

Following the demonstration, Vermillion explained additional fire safety protocols including the stop-drop-and-roll technique, the main technique he recommends children use if an incident were to occur where a person’s clothing were to catch fire.

Vermilion asked the children if they had any questions.

“What if I lose my voice in the fire,” Eva inquired.

“Hopefully we don’t ever have to worry about that, but if you do, we’ll figure out a way and we’ll get there to you. You can throw something, you can push some thing over, you can run over to us. Make noise,” Vermillion assured the young girl.

Finally, Vermillion announced the rain had ceased and they would be able to observe the department’s ladder truck.

“We’ll go outside and see the fire truck, start it up, spray a little bit of water. You guys can get in it and check it out, blow the air horn,” he said.

Attendees were then led out doors where the large ladder truck awaited them. The children happily ran to the truck where they were allowed to inspect the enormous vehicle, checking out every inch while Vermillion answered all of their questions.

“This is my favorite part,” Eva exclaimed.