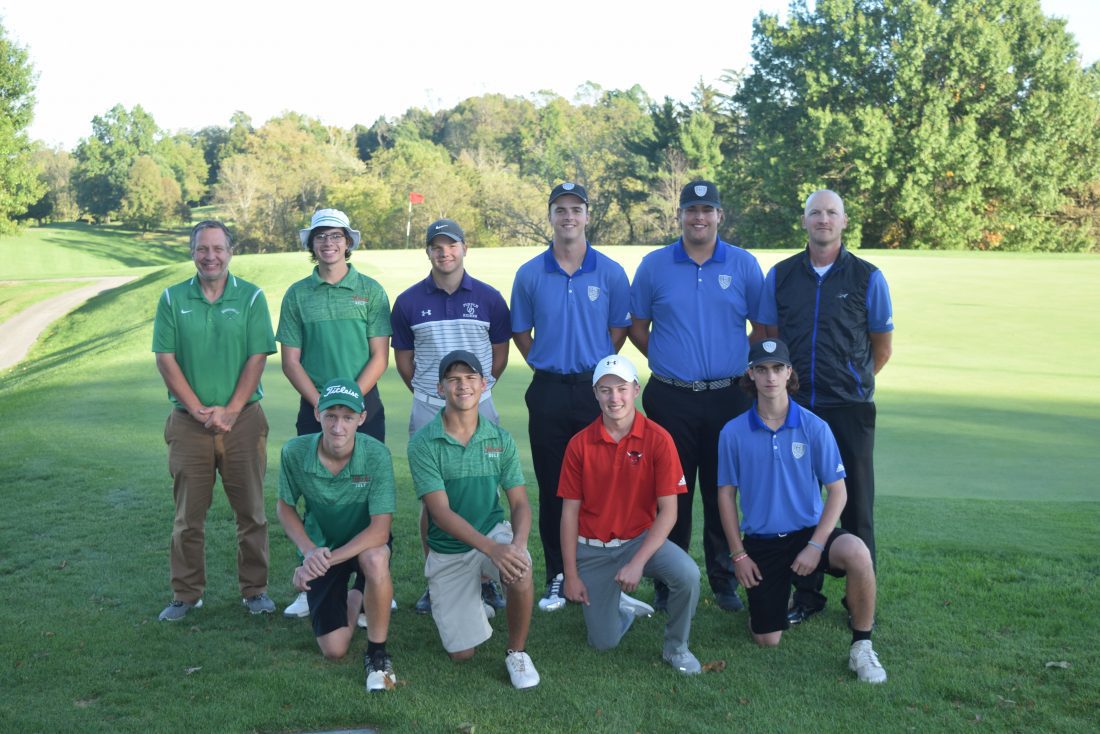 Prep golf season was a highly entertaining and competitive one in the Ohio Valley.

While nary a player from The Times Leader’s coverage area advanced to the Ohio State Tournament, several put themselves right on the doorstep.

With the help of area golf coaches, The Times Leader sports staff unveils its annual all T-L Golf Team today, honoring eight of the top players in the area as well as two highly successful coaches.

Barnesville’s Payne Johnson and Martins Ferry’s Luke Krol have been chosen as the captains of the team, while Shamrocks boss Jerry Robinson and Harrison Central head coach Todd Dunlap are the coaches of the year after guiding their respective teams to outstanding campaigns.

Here’s a capsule look at the honorees:

PAYNE JOHNSON, Barnesville — This senior standout put together a highly impressive final season in serving as the Shamrocks’ leader.

Johnson finished with a 9-hole average of 38.8 and claimed the OVAC Class 3A medalist honor. He also helped to guide the Shamrocks to the school’s first sectional golf title.

“The big difference in Payne this year was his leadership,” Robinson said. “Because of his high standards, he pushed all the kids to elevate their games. There were times when he willed our team to victory. Payne established a legacy for Barnesville golf that future players will try to achieve.”

Krol posted an average score of 38.85 for 9 holes and was either medalist or runnerup in the majority of the Purple Rider matches.

He captured the area golf trifecta by claiming the individual title in the Buckeye 8, OVAC Class 4A and OVGL. He also qualified for the Division II district tournament and narrowly missed a state berth.

“Luke put in so much work over the offseason and it definitely paid off,” Beck said. “Ultimately, he fell short of his main goal (of qualifying for the state tournament), but he ran into some really good competition at the district. I am proud of the way he finished. He had one of the most decorated seasons that I can recall in the valley, and I am proud to be a small part of it. It was really fun to watch.”

Byler was a steady number two player for the Shamrocks. He finished with an average of 39.7. He earned all-OVAC and all-OVGL for his efforts.

“Jim improved more than any kid I’ve ever coached over the last three years,” Robinson said. “Jim was a joy to be around and his positive attitude was contagious to the younger kids. He was the best teammate a coach ask for and he will be sorely missed by our program.”

CARTER WELLS, Barnesville — This steady sophomore followed up a fine freshman season with another impressive campaign.

Wells finished with a 9-hole average of 39.6 and was a key contributor to the OVAC championship as well as the sectional championship.

“Carter put up the best scores of any sophomore who played for me,” Robinson pointed out. “He spends hours a day on the course and his hard work made him one of the best golfers in the area. He has a bright future and the potential to re-write the school record books.”

WILL FOSTER, St. Clairsville — This talented sophomore had a break-out season for Coach Ryan Clifford’s team.

Foster finished his season with a 9-hole average of 39 and an 81 average for 18 holes.

He was named all-OVAC after finishing third in the Class 4A tournament, all-Buckeye 8 after he finished second overall. He was an all-Ohio Valley Golf League performer as well.

“Will went from being the five-man on the team a team year ago to being the guy we relied on as our number one player in every match,” Clifford said. “He knew that if we were going to be successful as a team, he would have to play at a very high level, so that’s what he did. Because of his maturity and his great work ethic, his future could not be any brighter.”

Capers finished with an average of 42 over 9 holes as he earned his fourth letter. He was an all-Buckeye 8 and all-OVAC performer.

“Cruz has been a mainstay in the lineup for four years now and has continued to improve,” Dunlap said. “His 9-hole average was down a full stroke this year and he led the team with 116 pars. He has had a great career and will be sorely missed.

SAMUEL SANTILLE, Harrison Central — This junior was another key cog in the success of the Huskies this season.

Santille led the Huskies in scoring average at 41.7, finished second to Capers for pars with 107 and led the team in birdies with 16. He had two eagles and produced the program’s first ace during an event in August.

“Sam has committed himself to the sport the last couple of years and has improved quickly,” Dunlap said. “His consistency, confidence and attitude helped him to be a leader on a team full of seniors. He will be looked upon to provide leadership and continue to work to improve for the future.”

NICK COFFLAND, Harrison Central — This Huskies senior had a final season to remember as one of the most consistent players for Dunlap’s team.

Coffland finished with a 44.2 average for 9 holes and earned honorable mention all-Buckeye 8. He ended his season impressively, posting a 1-under par round late in the campaign and then shot a career-best round in the district tournament late last month.

“Nick’s finish to the season shows the determination and never-quit attitude that he demonstrates,” Dunlap said. “He has put in countless hours the last few seasons and offseasons to improve his game. It finally came together for him this season. He and the other seniors will be missed.”

TODD DUNLAP, Harrison Central — This veteran Huskies’ head coach completed his 15th season at the helm and guided his team to a new level.

The Huskies claimed the Buckeye 8 title once again and then captured their first OVAC title a few weeks later. They also advanced to the Division II District Tournament as a team once again.

“Our team was a veteran group that had seen a lot of varsity action, so that experience paid dividends in what turned out to be a record-setting season,” Dunlap said. “The tournament five had a combined 17 letters, two Buckeye 8 titles, an OVAC title and three trips to the district as a team. Their dedication and work ethic has led our program to this point. It’s definitely a season that i will not forget, but more so than the accomplishments, I will remember this team as a great group of kids who turned into a better group of young men.”

JERRY ROBINSON, Barnesville — This veteran boss guided his team to repeat heights this seasons in many cases.

The Shamrocks finished the regular season with a 26-0 record in league matches and claimed their second straight OVAC Class 3A title. They also won the Division II sectional and finished fourth in the district. ALl told, the Shamrocks have won 75 consecutive matches in the OVGL.

“I was just along for the ride this year as the kids re-wrote the school record book,” Robinson said. “This was the most satisfying season of my career. In addition to being a great team, these kids were a pleasure to be around. The kids genuinely cared as much for their teammates as they did for themselves. Words can’t express how much we’re going to miss Payne Johnson and Jim Byler. It’s going to be difficult next year not seeing those guys when we start practice.”