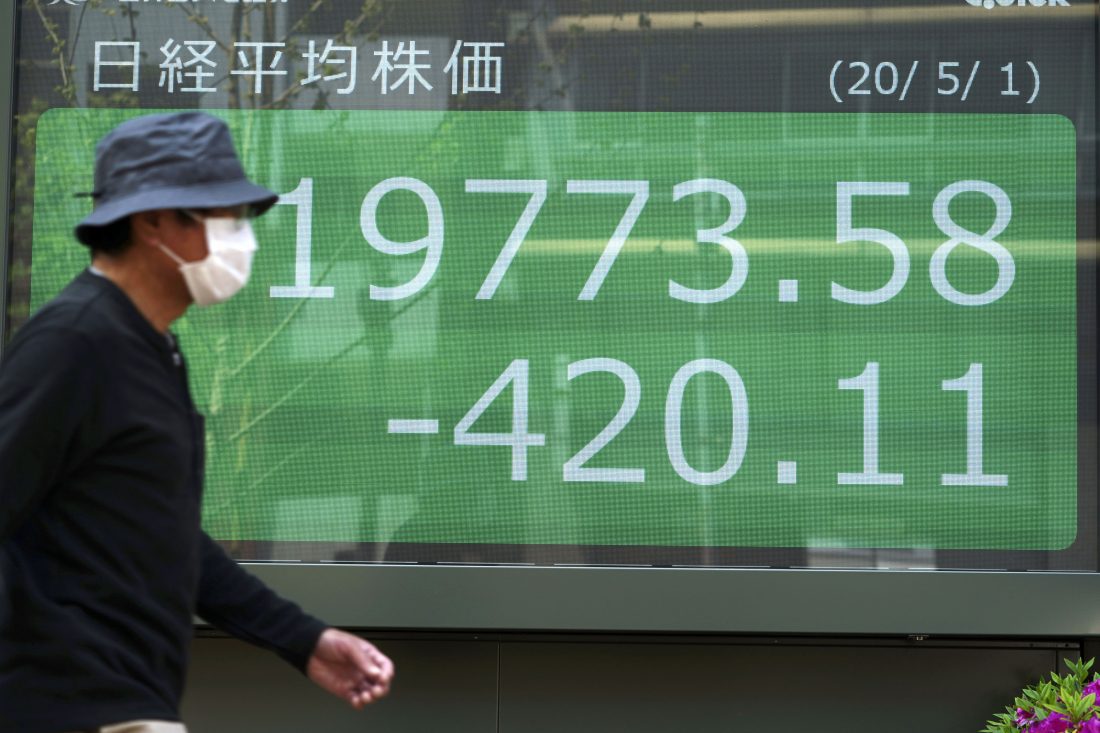 A man walks past an electronic stock board showing Japan's Nikkei 225 index at a securities firm in Tokyo Friday, May 1, 2020. Shares have dropped in Asia after Wall Street ended its best month in 33 years with losses on fresh news of economic carnage from the coronavirus pandemic. (AP Photo/Eugene Hoshiko)

Stocks ended lower on Wall Street Friday, giving up their gains for the week, after Amazon and other big companies laid out how the coronavirus pandemic is hitting their bottom lines. The S&P 500 index fell 2.8%. Amazon sank after its profits fell because of a sharp increase in costs related to providing deliveries safely during the pandemic, despite a big increase in revenue. Bond yields held steady and the price of oil rose slightly. Many world markets were closed for the May Day holiday. On Thursday the S&P 500 closed out its biggest monthly gain since 1987.

THIS IS A BREAKING NEWS UPDATE. AP’s earlier story is below:

Stocks headed broadly lower on Wall Street Friday after Amazon and other big companies reported disappointing results, the latest evidence of how the coronavirus pandemic is hobbling the economy and hurting corporate earnings.

A day after closing out its best month since 1987, the S&P 500 was down 2.7% and on track for its second straight weekly loss. The selling accelerated as the day went on, with energy stocks taking the biggest losses. Technology stocks and companies that rely on consumer spending accounted for a big slice of the decline.

Amazon sank 7% after it reported profit for the latest quarter that fell short of Wall Street’s forecasts. The retail giant also said it will spend billions of dollars this quarter to pay workers overtime, buy masks for them and make other investments. Its movements have outsized sway on the S&P 500 because it’s the third-largest company in the index. Amazon alone accounted for one-seventh of the S&P 500’s loss for the day.

“We all had these great expectations for Amazon,” said J.J. Kinahan, chief strategist with TD Ameritrade. “The stock ran up amazingly because we were expecting their earnings to be good.”

Exxon Mobil fell 5.7% after it said it swung to a loss of $610 million last quarter. It had to write down the value of its inventories by $2.9 billion amid a collapse in energy prices as airplanes, automobiles and workplaces worldwide suddenly went idle in the spring.

Exxon Mobil helped drive energy stocks across the S&P 500 to a 5.8% loss, the largest among the 11 sectors that make up the index.

Wall Street has been bracing for a poor showing by companies this earnings season due to the economic shock from the coronavirus. Many companies have pulled their earnings guidance for the rest of the year, citing uncertainty about how much of an impact the outbreak will have on their business and the economy, which is now in a recession.

“There’s an expectation that we’ll have a very difficult second quarter for GDP and profits, and the third quarter will probably still be difficult,” said Jason Pride, chief investment officer of private wealth at Glenmede.

That has many analysts looking past the next few months and betting on a recovery by the end of this year or in 2021.

“But, that’s predicated on us not having a second wave of the outbreak,” Pride said.

Disappointing company results weren’t the only drag on stocks Friday. Shares of electric car and solar panel maker Tesla Inc. slid 9.4% after CEO Elon Musk tweeted that the price was too high. In a series of tweets just after 11 a.m., Musk said he was selling nearly all of his physical possessions and would not own a house. Then he wrote that “Tesla stock price is too high imo.” After that he tweeted that people should be given back their freedom, in another protest of government stay-home orders to slow the spread of coronavirus. Then he posted parts of the U.S. national anthem.

The tweets came as Musk, who has 33.4 million followers on Twitter, was getting close to getting a big payout from the company for meeting certain metrics including that the company’s market value averaging over $100 billion for six months. Even with Friday’s decline, the market value was $129.5 billion.

“Clearly the Street is frustrated at this tweet,” Wedbush analyst Daniel Ives wrote in an email, adding that the tweets are “Elon being Elon.”

Stocks have been rallying recently as economies around the world lay out plans to relax stay-at-home orders and as hopes rise that a possible drug treatment for COVID-19 may be on the horizon. They added to earlier gains sparked by massive aid promised by the Federal Reserve and Congress, and the U.S. stock market just closed out its best month in 33 years.

The U.S. stock market has more than halved its sharp losses from its February record into late March, triggered by worries about a sudden, devastating recession.

Many professional investors say the rally has been overdone given how much uncertainty still exists about how long the recession will last. If U.S. states and nations around the world reopen their economies prematurely, it may lead to additional waves of infections, which could mean more business closures, layoffs and economic devastation.

“Overall, we’re generally positive on the market, but think there could be some short-term pullback here,” said George Rusnak, head of investment strategy at Wells Fargo Private Wealth Management. “As we start opening up, seeing if we get a second spike or not, that’s the big thing for us.”

The yield on the 10-year Treasury rose to 0.63% from 0.62% late Thursday. It’s still well below the roughly 1.90% level where it was at the start of the year. Longer-term Treasury yields tend to move with investors’ expectations for the economy and inflation, and a Friday report showed that U.S. manufacturing plunged in April, but not as severely as economists were expecting.

Benchmark U.S. crude oil rose 5% to settle at $19.78 per barrel. U.S. crude has plunged from its perch of roughly $60 at the start of the year on worries about a collapse in demand and strained storage facilities.

In Japan, the government is keeping social distancing measures in place to prevent a resurgence of infections.

Australia’s market was one of the few others open Friday, and its S&P/ASX 200 plunged 5% with heavy losses in miners and banks. A measure of Australian manufacturing showed activity contracting at its worst pace since 2009.