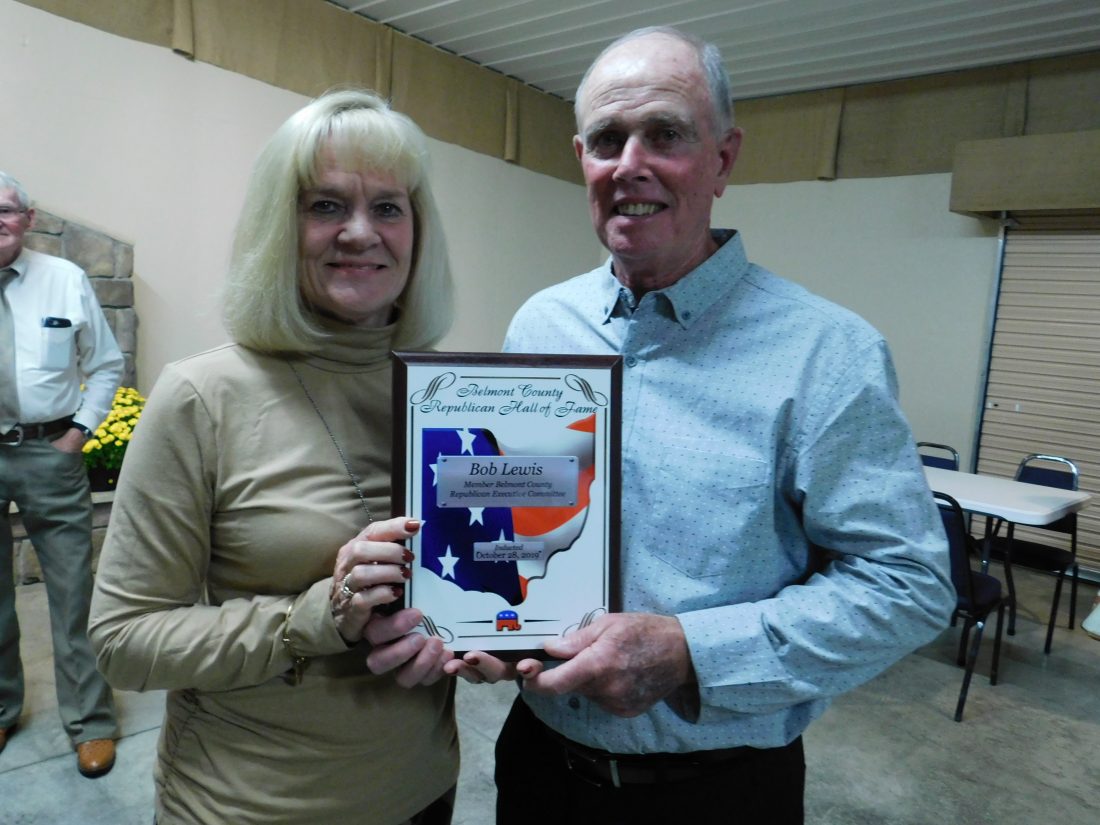 T-L Photo/ROBERT A. DEFRANK Bob Lewis of Belmont joins the ranks of Belmont County Republican Party honorees in the Hall of Fame last Monday during the GOP Fall Dinner in Bethesda. He and his wife, Donna, thanked those gathered and credited family and faith for their work in the community.

BETHESDA — Bob Lewis of Belmont was a guest of honor during Monday’s Belmont County Republican Party Fall Dinner at Shepherd Farm, but he did not know it until he was inducted into the party’s Hall of Fame.

Barb Bashline of Flushing, who was honored as a Hall of Fame inductee, introduced Lewis. She said since 2005, the party has recognized community-minded individuals who have supported and strengthened the local GOP by contributing their time and talent. She pointed out several past members in the audience, including Jim Carnes, Cynthia Fregiato, David Jones and Kellie Conway.

She summed up Lewis’ work, but saved the identity of the award recipient until the end.

“The individual for this year has been a resident of (Belmont County) for most, if not all of their life, has spent much of their life serving that community as a volunteer firefighter, an EMT. … They’re also very active in their church as a trustee, going on mission trips, which include building churches in another country.”

Bashline added Lewis was a member of the local Rotary Club and a graduate of Union Local High School with deep roots in the area.

“We’d like to honor you for all your service to family, church, community, and to this Republican Party,” Bashline said.

The 160 attendees of the GOP dinner gave a standing ovation.

Bob Lewis, although evidently touched, was a man of few words during the occasion. Donna Lewis, his wife of 49 years, thanked the party on his behalf.

“This is a total surprise,” she said.

The Lewis family had the challenge of keeping the news from Bob Lewis until the evening of the award.

“This was one well-kept. … We’re proud to have served the central committee for all these years. It’s quite an honor for him. We thank you for that. Life hasn’t been easy. We don’t know what cards we’re dealt in life. Our family has been down some dark valleys, but God has always been there to see us through,” Donna said.

Bob and Donna Lewis have two children, five grandchildren and two great-grandchildren, with a third due next spring.

“We try to live each day to the fullest by praising God and thanking Him for the blessings that He’s given us, because we don’t know what tomorrow’s going to bring,” she said.

She referred to Matthew 6:33, urging people to seek the Kingdom of God and live righteously.