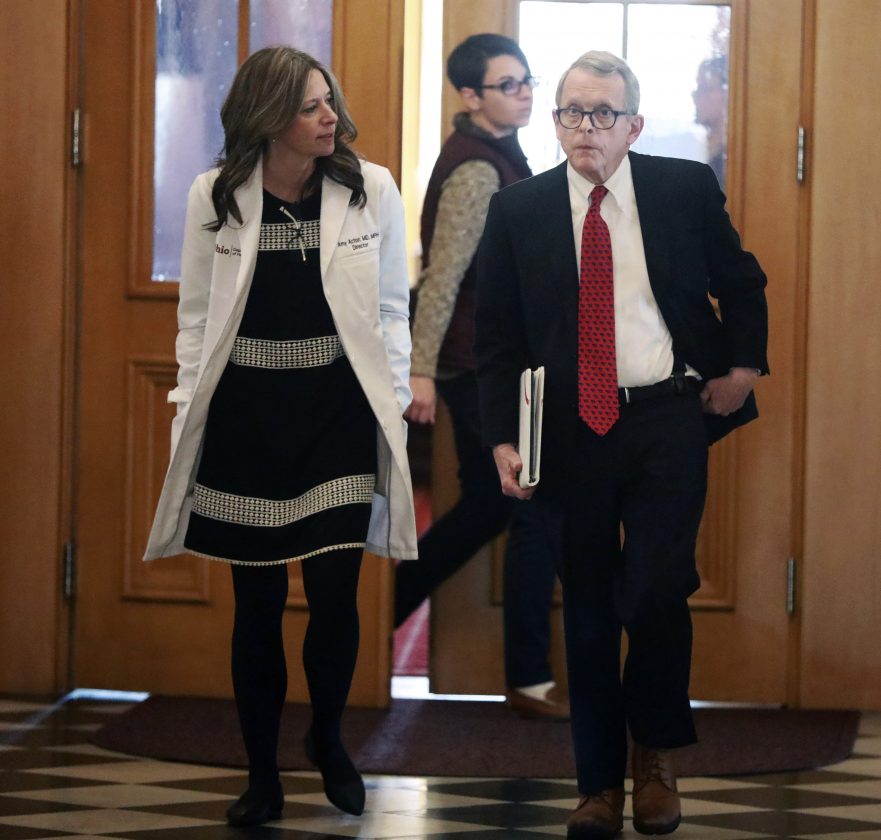 COLUMBUS, Ohio (AP) — Columbus Blue Jackets player Cam Atkinson, Dayton basketball coach Anthony Grant and former Ohio State football coach Jim Tressel are among Ohio sports celebrities joining an effort to encourage residents to comply with a statewide order to stay home except for doing essential work or taking care of health and basic needs for themselves or others. The campaign goes by hashtags including #InThisTogetherOhio. Grocery stores, banks and other essential businesses remain open. The state’s health director says idled dorms and hotels could be used as overflow areas if hospital capacity is exceeded. Cases now top 560. A look at coronavirus-related developments in Ohio on Tuesday:

Ohio has more than 560 cases and eight deaths across 49 counties. A handful of long-term care centers are being called hotspots for cases, accounting for 25 of the 62 intensive-care patients in Ohio. But there was a bit of good news Tuesday: No new cases were reported at two Miami County nursing homes where more than 20 residents and staff members have tested positive.

Most people experience mild or moderate symptoms, such as fever and cough, from the virus. For some, especially older adults and people with existing health problems, it can cause more severe illness, including pneumonia, or death. The vast majority of people recover.

Lt. Gov. Jon Husted said the governor’s stay-at-home order is written in “plain language” and businesses deciding whether to stay open should read it and rely on their best judgment. If they stay open, they should be ready to explain why they are essential and should not burden local police and health departments with requests to interpret it for them.

The coronavirus will have a dramatic economic impact on state revenues — starting next month, state Budget Director Kimberly Murnieks said in an interview Tuesday. No layoffs or impacts to state coronavirus-fighting efforts are planned.

The city of Columbus has temporarily suspended collections of delinquent income taxes, EMS and public utility fees. Hundreds of nonessential city workers in Dayton have been instructed to work from home.

Voting rights groups have weighed in on a pending lawsuit over Ohio’s delayed March 17 primary. The ACLU of Ohio, Ohio League of Women Voters and others did not take a side on whether in-person voting should proceed on April 28, May 16, June 2 or some other date, but advocated for registration to remain open and for access for all voters.

Police in Cincinnati are social distancing from perpetrators of certain less-serious crimes to prevent the spread of the virus.

As part of a new “differential response plan,” the department will no longer immediately send an officer to certain reports of minor assault, minor theft, property damage, break-ins with no chance of property recovery, dog bites, lost property and phone harassment. Some 911 callers will be referred to online or telephone reporting systems.

Giant Eagle is installing plexiglass dividers at checkout stations and customer-service counters and halting use of reusable bags. The changes are in effect at Giant Eagle, Market District, Pharmacy and GetGo locations, cleveland.com reported. The company also is marking floors in checkout areas to indicate appropriate social distance between customers.

Organizers have canceled a festival that celebrates the spring bird migration along western Lake Erie. The event in early May typically draws visitors from around the world to parks and marshes along the lake and generates an estimated $40 million, according to a study released a few years ago by event organizers. A 50th anniversary weekend commemorating the victims of the May 4, 1970, shootings at Kent State University also has been canceled. A virtual commemoration program is being developed.