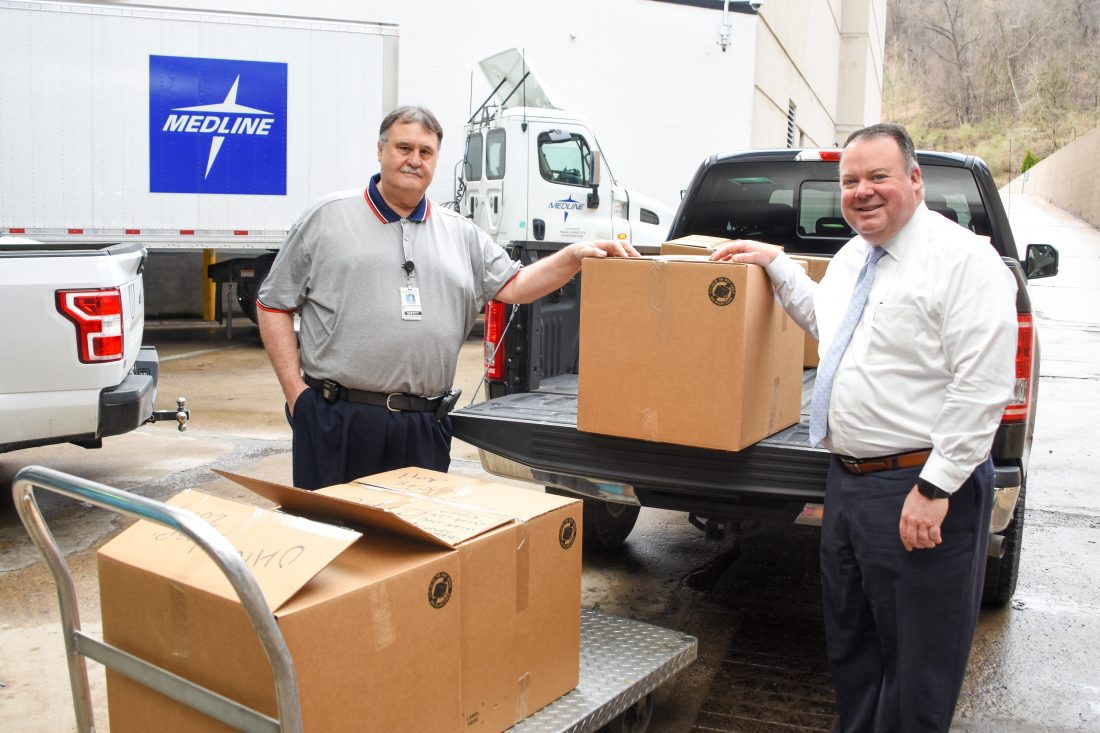 Wheeling Hospital on Wednesday received some protective medical supplies released by the Strategic National Stockpile to the state Department of Health and Human Services. The state sent them to county health departments to be shared to hospitals. Wheeling Hospital CEO Douglass Harrison, right, is shown with the medical supplies at the loading dock with John Sebring, director of Safety and Security. Photo Provided

WHEELING — The novel coronavirus is having a greater impact on the Ohio Valley now, with Ohio County reporting its first two positive COVID-19 cases and Belmont County having its third positive test and a possible fourth case.

The new COVID-19 cases were announced Wednesday morning. The two people affected in Belmont County are contacts of a county couple who tested positive for COVID-19 earlier in the month.

The first case in Ohio County is a female who was tested on March 23 and whose test came back positive on Tuesday.

The second case is a male who was tested on March 17 and whose results came back positive on Wednesday.

The female patient is at home currently. The male “is at a home, now out of the county,” Gamble said.

The Wheeling-Ohio County Health Department continues to work on investigating the cases and notifying people who were in contact with the infected patients.

“Our contact investigation is not complete,” Gamble said. “Staff are still working on making all the contacts and if necessary advising them to get tested.”

In Belmont County, Robert Sproul, deputy health commissioner, said, “We have one positive and one presumptive positive (waiting on his test to come back). They are contacts of the positive (couple) and were under quarantine already.”

Regarding the previously diagnosed couple, Sproul said the woman is recovering at home and her husband has been released from Wheeling Hospital.

Meanwhile, Gamble said that now having positive cases in Ohio County “really does not change any of our current practices or work. When cases grow or we have an identified cluster testing, investigation and other aspects of our work will change.”

The health department is conducting contact investigation with the patients and will be monitoring their general health. All confirmed cases are isolated and close contacts are quarantined for 14 days from last exposure.

Wheeling Hospital is operating a COVID-19 testing site in the parking lot of Wheeling Park. Testing is being done from 10 a.m. to 4 p.m. Monday through Saturday. Ohio Valley residents who are interest in being testing should call the one-call number at 304- 221-3996.

“Wheeling Hospital is doing a great job and testing is coming back faster than when we started,” Gamble said.

Both Gamble and Sproul said they have not been informed of any test results being lost, but noted people have expressed concern about the length of time it takes to get results.

“Some clients might be asked to be retested,” Gamble said.

“There has been a large delay in the testing results and we have received many calls from upset people who were tested,” Sproul added.

The Belmont County Health Department is getting faxes on the tests being done on Belmont County residents at the Wheeling Park testing site, Sproul said.

If the Ohio Department of Health lab does the testing, the Belmont County Health Department is notified of results first, Sproul said. When private labs conduct the testing, they are notifying the patient and the county health department, he added.

In West Virginia, Gamble said, “Results are reported from the testing facility, in this case Wheeling Hospital or the WV State Lab (only positives), to the patient. The results are then sent to the patient’s physician for follow-up (both negative and positive). Some results may have positive results for another virus and would then allow the physician to treat that issue.

“Positive results are also reported to the county health department, in which we then begin our contact investigation and follow-up,” Gamble said.