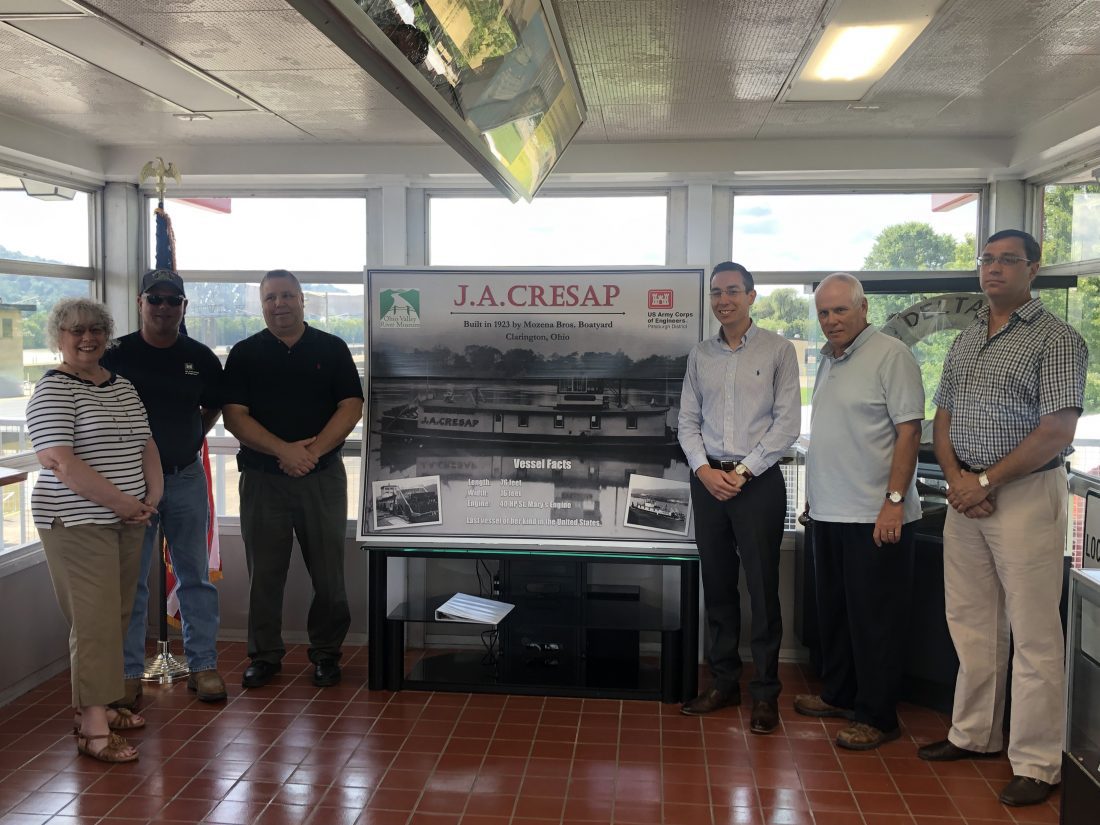 Taylor Abbott, fourth from left, is president of the Ohio River Valley Museum in Monroe County. Here, he and others connected with the facility celebrate plans to move to a new headquarters at the Hannibal Locks and Dam.

HANNIBAL — After 10 years in Clarington, Ohio, the board of the Ohio Valley River Museum is pleased to announce plans for future developments at Hannibal Locks and Dam after moving from its current location on Sept. 1.

The river museum first opened its doors in 2010 inside the Ohio Valley Community Federal Credit Union’s former Clarington branch, which was leased to the organization for $1 per year with all utilities paid by the credit union.

In 2016, the museum entered into a first-of-its-kind partnership with the Pittsburgh DistrictArmy Corps of Engineers to reopen the visitor’s center at the Hannibal Locks and Dam, which has since been visited by more than 15,000 people from all over the United States and around the world.

The museum was formally named an adjunct organization of the Sons and Daughter of Pioneer Rivermen in 2019, which owns part of the museum’s current collection and has been instrumental in its development.

Later that year,the museum was donated the historic J.A. CRESAP sternwheeler that was built in Clarington atMozena Bros.

Boatyard in 1923. It is the last surviving wooden-hulled sternwheel vessel of its kind in the United States. The vessel was transported by super load 750 miles from Guttenberg,Iowa to the Hannibal Industrial Park in Hannibal, Ohio last November.Plans are underway by the museum and Pittsburgh District Corps of Engineers to restore the historic vessel to its original 1923 appearance and permanently display it at Hannibal Locks andDam in a new visitor’s center facility.

“This is an exciting time for our museum as we look to the future. We are preparing for a new chapter at Hannibal Locks and Dam and are so very grateful for the support the Ohio Valley Community Federal Credit Union and the public has provided to us over the past decade,” said museum president Taylor Abbott. “We are now set to begin the CRESAP’s restoration and look at options for building a new visitor’s center on site that will house the boat and our museum’s collection. Our goal is to have the boat restored and a new facility in place by the time of the CRESAP’s 100th anniversary in 2023.

During this period of transition, the museum will continue to operate the historical exhibits and visitor’s center at Hannibal Locks and Dam while its museum collection will be temporarily stored until the new facility is constructed.Tax deductible donations can be made to the organization through theMarietta Community Foundation in c/o of the Ohio Valley River Museum at P.O. Box 77, Marietta, OH 45750.

WHEELING — Two estimates have been received for the replacement of the Washington Avenue Bridge over Big Wheeling ...

Availability of substitute teachers a concern

WHEELING — When teachers call off in Ohio County Schools this school year, it might not be easy for ...

Diocese of Wheeling-Charleston opens another avenue for reporting abuse

WHEELING — The Diocese of Wheeling-Charleston in West Virginia has partnered with another third-party reporting ...