Yale team, others talk about their work 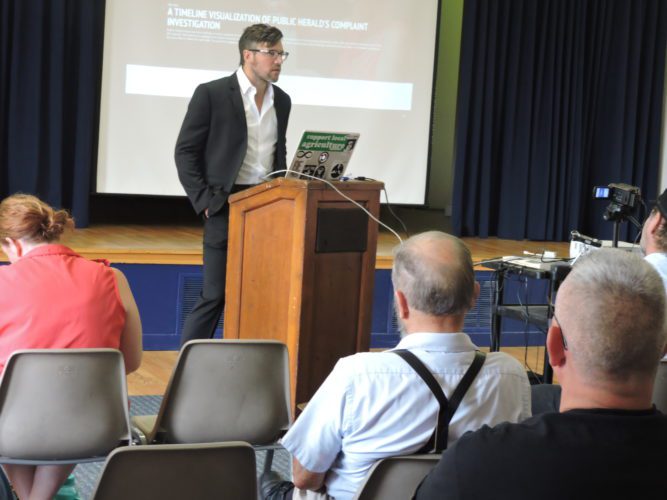 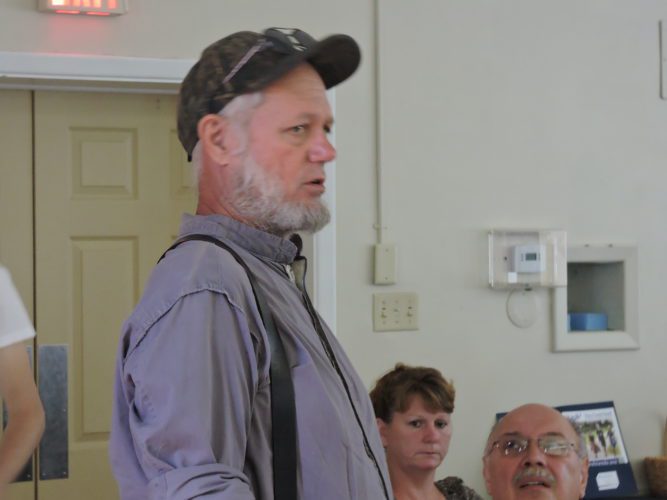 BARNESVILLE — Although it may be some time before the results are known, Yale University researchers who have spent the last two months studying the impact of the natural gas industry on Belmont County’s air and drinking water met with residents at Olney Friends School Saturday to discuss their work.

Nicole Deziel, assistant professor of epidemiology at the Yale School of Public Health, said the study was created to determine whether people who live close to natural gas wells experience more air and water pollution.

Deziel spoke about the sampling and research process, adding no results have yet been determined. She said analysts have been in Barnesville for an eight-week study involving the collection of air and water samples.

She said the sample collection procedure ended Friday, with residents of 66 homes participating.

Air sample collectors were set up outside the homes and drinking water was collected from kitchen taps. Air monitors also were set up in the homes for about 10 days, while the residents filled out questionnaires regarding their homes and general health.

Deziel said the samples were shipped to a lab for chemical analysis for a broad range of compounds, such as volatile and diesel-related compounds and organic compounds. Researchers also will take other factors into account, such as activities or characteristics around the homes and environmental factors.

Deziel added Belmont County’s abundance of natural gas wells made the site an ideal spot for the study. She also expressed appreciation to Olney, which provided workspace to researchers.

Deziel said the analysts now will return to Yale to study the samples and data, publish a report and return to the community to discuss their findings.

Melanie Houston, director of oil and gas for the Ohio Environmental Council, said this was an important step, adding her organization is an advocacy group pledged to share information and promote activism toward stronger Environmental Protection Agency standards grounded in science. She said the study and data will be invaluable in conjunction with the anecdotal cases the OEC has gathered.

Houston’s talk focused on methane and other air pollutants. She also discussed another resource her organization has put together, an oil and gas “threat map.” She noted Ohio is featured and said people have been known to report a negative health impact when living within a half-mile of a natural gas industry facility.

Houston added people may enter their addresses into the map, which is available at oilandgasthreatmap.com, to see if they live in such an area.

Joshua B. Pribanic, editor-in-chief of The Public Herald, a nonprofit public news organization, said sampling alone gives an incomplete picture of the situation and noted the importance of taking complaints from landowners into account.

“Complaints themselves are really the road map to understanding what’s happening,” he said. “In order to understand (what) the impact to drinking water quality is going to be in a given area, they first need to collect and review all of the complaint cases that have been submitted to the Ohio EPA. … There are cases where drilling is done, and two or three years later, contamination is showing up in people’s water supplies.”

He also noted the importance of ensuring the investigation of those records is available to the public.

Pribanic spoke about the work his organization did in Pennsylvania, noting that it has investigated fracking since 2011. This resulted in the 2013 feature film, “Triple Divide,” about how states and the industry handle the negative impact of fracking.

This involved an examination of state records of complaints and the information sent to homeowners. Pribanic said his organization found inaccuracies and misinterpretations of the law by regulators in favor of the industry, allowing drinking water contamination cases to go unchecked.

Pribanic believes this invalidates the EPA’s water study released in the summer of 2015 concluding no systemic negative impact on water caused by fracking.

“The national study where (the EPA) make conclusions conclusions on drinking water quality and fracking, they did not include these thousands of cases that we ended up publishing online,” he said.

Pribanic said his organization scanned records in the Pennsylvania Department of Environmental Protection’s three oil and gas offices for three months and so far have amassed complaints covering 17 of the 40 shale gas counties in that state.

“It confirmed for us what we saw in the film ‘Triple Divide,’ where the state was mishandling drinking water complaint cases, and they were making decisions not based on the science available to them, but rather they seemed (to be) more political decisions.”

He said there were prior incidents where records have been blocked based on exemptions in Pennsylvania’s open records law, which states individuals have a right to know what chemicals they are exposed to in their daily living.

Guests also brought up issues such as sickly trees in the area. Jill Hunkler, environmental outreach coordinator with Olney Friends School and a member of a group known as “Concerned Barnesville Area Residents,” spoke about health issues occurring or exacerbated in the area during recent years.

ST. CLAIRSVILLE — City Council welcomed the public to its Monday meeting since COVID-19 restrictions have been ...

BELLAIRE — The Bellaire Police Department officer accused of forcing a woman to perform sex acts on him in ...

WHEELING — Studies are underway to determine if a booster shot for the COVID-19 vaccine will be needed to combat ...