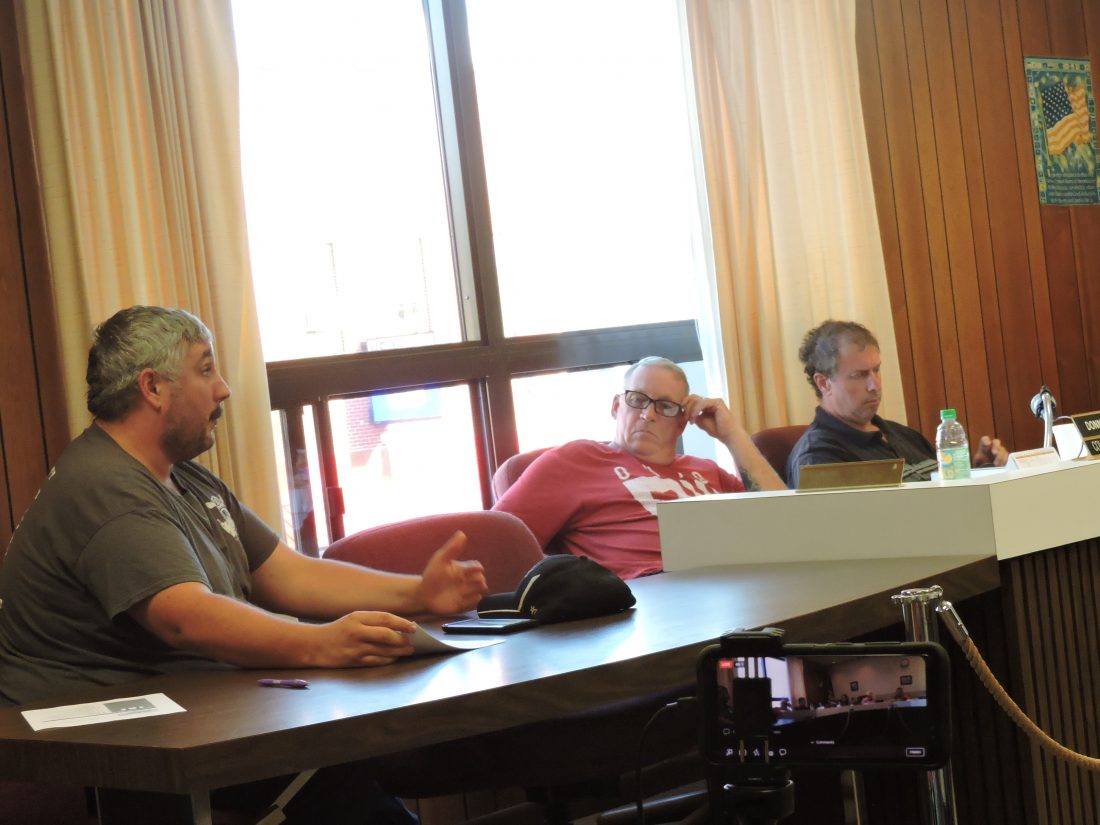 T-L Photo/CARRI GRAHAM Bellaire Fire Chief Josh McMann speaks to council about an agreement made last month with the village in which they agreed to pay 50 percent of an emergency shelter project that is currently underway.

BELLAIRE — The Bellaire Volunteer Fire Department will soon become an emergency shelter upon completion of a $67,805 project that is currently underway, although tensions ran high between firefighters and members of council at Bellaire Village Council’s meeting Thursday night.

Last month, council agreed to pay 50 percent of its share of shelter project, a payment the fire department says they are still awaiting.

The firefighters secured a $25,000 grant from Scott Electric Foundations in order to make a payment to Mountain Aire, the company approved to complete a project that includes installation of a generator and air conditioning unit. The installations will allow the fire house to become an emergency shelter for the community.

On July 19, council entered into a contract with the department that said they would pay half of the remaining share to the company completing the work. The village owes $8,902 up front to the company performing the work and the rest is due upon the project’s completion.

The project with Mountain Air is currently underway and is awaiting the payment from the village, Fire Chief Josh McMann said at Thursday night’s meeting.

McMann said there has been a lot of “clerical errors” on many grant applications and projects the firefighters have attempted over the past four years. He claims that the department has lost out on $341,321in funds, not including grants, due to errors made by Marla Krupka, village deputy auditor, who was not present at Thursday’s meeting.

“You can’t approve every thing first and then after every thing starts with the contract you’re in, try to stop,” McMann said to council.

Raymond Penyak, a Bellaire firefighter, said it took them 150 hours to secure the grant in order to make the necessary improvements to the facility.

“I wasn’t going to volunteer my time. … to go and get this grant so we can better serve the citizens of Bellaire, unless you guys (council) was going to entertain the idea. You guys said ‘yeah,’ he said to council.

The house has to be in order, Clerk Tom Sable said. Sable said the $25,000 check should have been given to the village and then they would have paid the full amount owed to Mountain Air, so there would be a paper trail for the payment.

Penyak said that four air conditioning units have already been installed on the building and the crew is “getting ready to do the state permit to do the generator.”

Solicitor Michael Shaheen said that no one is not for the project.

Council eventually agreed to approve a resolution, written up by Shaheen, that agrees to pay the village’s share of the project upon the fire department giving the village proper documents.

McMann said contingent on the crew receiving payment, the project should be completed by the end of the year.