Making a case to women 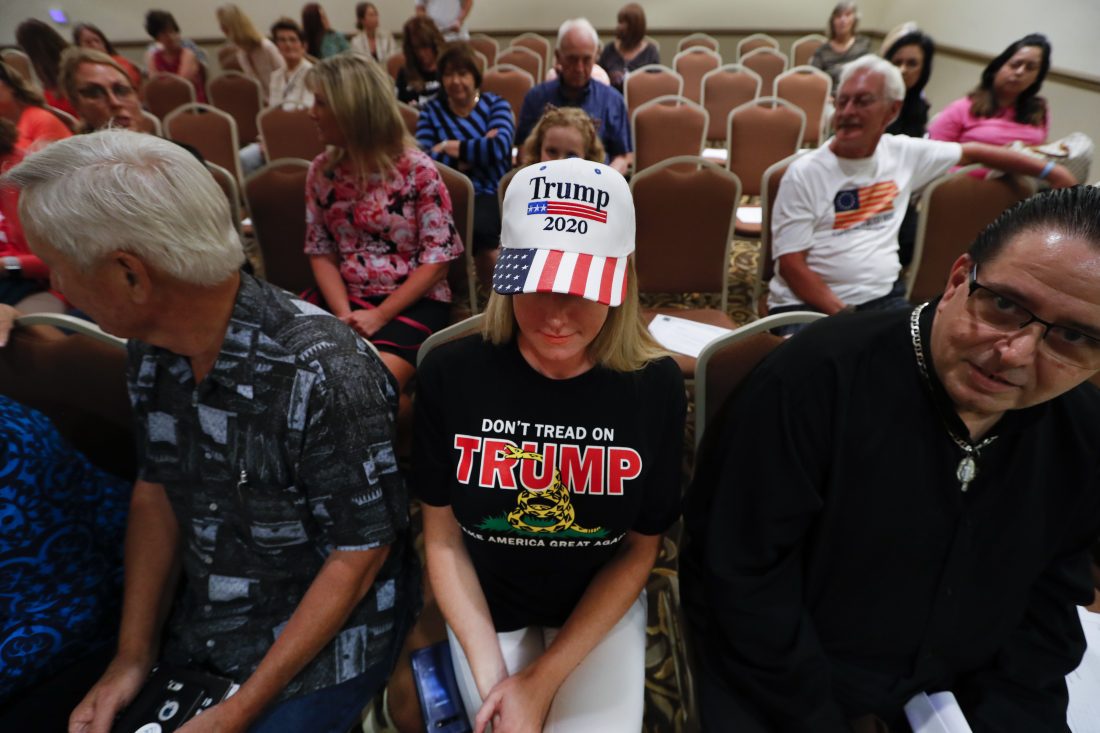 Lisa Mankiewicz sits in the audience during a training session for Women for Trump, An Evening to Empower, in Troy, Mich., Thursday, Aug. 22, 2019. President Donald Trump's campaign is rallying and training a corps of female defenders, mindful that Trump's shaky standing with women could sink his hopes of reelection next year. Female surrogates and supporters fanned out across important battlegrounds Thursday in a high-profile push to make the president's case on the economy and to train campaign volunteers. (AP Photo/Paul Sancya)

DES MOINES, Iowa (AP) — The Trump campaign has a message for its female supporters: It’s time to come out of hiding.

“There’s a lot of people that are fearful of expressing their support, and I want you ladies to know it’s OK to have felt that way, but we need to move past that or the Democrats win,” said Tana Goertz, a Trump campaign adviser, at an Iowa “Women for Trump” event on Thursday.

The Iowa event, held in the back room of a barbecue joint in a Des Moines suburb, was one of more than a dozen in battleground states nationwide as part of a push to make the president’s case on the economy and train volunteers.

The move is a recognition of the president’s persistent deficit with women — an issue that has the potential to sink his chances for reelection. Over the course of his presidency and across public opinion polls, women have been consistently less supportive of President Donald Trump than men have. Suburban women in particular rejected Republicans in the 2018 midterm by margins that set off alarms for the party and the president.

Trump himself called into a gathering of hundreds in Tampa, Florida, and insisted, to cheers: “We’re doing great with women, despite the fake news.”

But polling suggests his challenges persist. The most recent Associated Press-NORC Center for Public Affairs Research poll found just 30 percent of women approve of the way the president is doing his job, compared to 42 percent of men. Notably, there was no gap between Republican men and women — 80 percent of both groups said they approved of his job performance in the August poll.

At an event in Troy, Michigan, a Detroit suburb viewed as key contested territory, Michigan Republican Party Chairwoman Laura Cox acknowledged that Trump’s style is a turnoff for some female voters. But she told the audience of 100 women to focus instead on what Trump had accomplished during his first term.

“I get it. I say, ‘Listen, you never wonder what he thinks about people,'” she said. “Some people may not like what he says. But he delivers and has a very good track record of deliverables. And that’s what’s important. I try to get people focused on that, not the personality.”

In Iowa, Goertz listed a number of ways that she said women are benefiting from Trump’s presidency, including low unemployment, job creation and “safety” — and she said his immigration policy was a winner there.

“When I lay my head down at night, I want to know that my children are safe, that a terrorist is not going to come into our country,” she said.

Similar events were scheduled in 13 battleground states, including North Carolina, Pennsylvania, Georgia and Ohio. The events, led by surrogates including White House counselor Kellyanne Conway and former Fox News host Kimberly Guilfoyle, sought to train attendees to be volunteers and what the campaign describes as “ambassadors” for the reelection effort.

Among the women in attendance in Troy was Cara McAlister, a sales representative from the nearby suburb of Bloomfield Township. She said Trump’s 2016 candidacy inspired her to get more involved politically, and she became a GOP precinct delegate and canvassed door to door for him.

She has friends who were afraid to reveal their support for Trump because they fear backlash. So she invites them to meetings like Thursday’s gathering.

“They really enjoy being in an atmosphere where they feel free to express their support for the president,” said McAlister, who was wearing a white “Make America Great Again” cap and blue Trump-Pence shirt and who described herself as “middle age.” ”They tend to want to go to another event.”

In Iowa, Joyce Lawson, a 30-year-old barbershop owner from Norwalk, said she finds herself targeted by friends for her conservative views.

“I’m afraid of people saying off-key stuff, like you’re racist, you’re with the Klan, just random uneducated stuff, and name-calling. So I want to have facts to stand up for my views,” she said.

Trump has turned off higher-income, college educated and younger women “because of how he speaks, how he tweets,” said Republican pollster Frank Luntz, while retaining the support of older women and women with lower incomes and without college degrees.

That contrast is evident in Iowa, a state Trump won by more than 9 percentage points in 2016, but one that has historically been seen as a potential swing state.

“He’s helped this country more than anybody else in the last 20 years,” the 70-year-old retiree said. She added that Democratic attacks against the president, and the leftward tilt of the Democratic Party, have made her all the more enthusiastic toward Trump.

Others like Mary Miner, a lifelong Republican and small-business owner from rural Iowa, were driven away from the GOP by Trump.

“I’m astonished anyone could support him,” the 61-year-old Miner said. “If my party is going to support that, I’m done with ’em. I’m a Democrat and that’s it.”

Recent focus groups show that women have dug in on their views, suggesting there are fewer women open to being persuaded, Luntz said.

“It’s become more pronounced where those who don’t like him are overtly hostile and those who do like him will stand up for him aggressively,” Luntz said. “They are even more outspoken than men. They are even more dismissive. It’s spoken with attitude and with venom. And I think it’s because they take it personally.”

As a result, he said, the election is likely to come down to a very narrow demographic — married professional mothers with teenagers, he says — who credit Trump for a booming economy but are turned off by his style.