Incumbent not certified due to clerical error 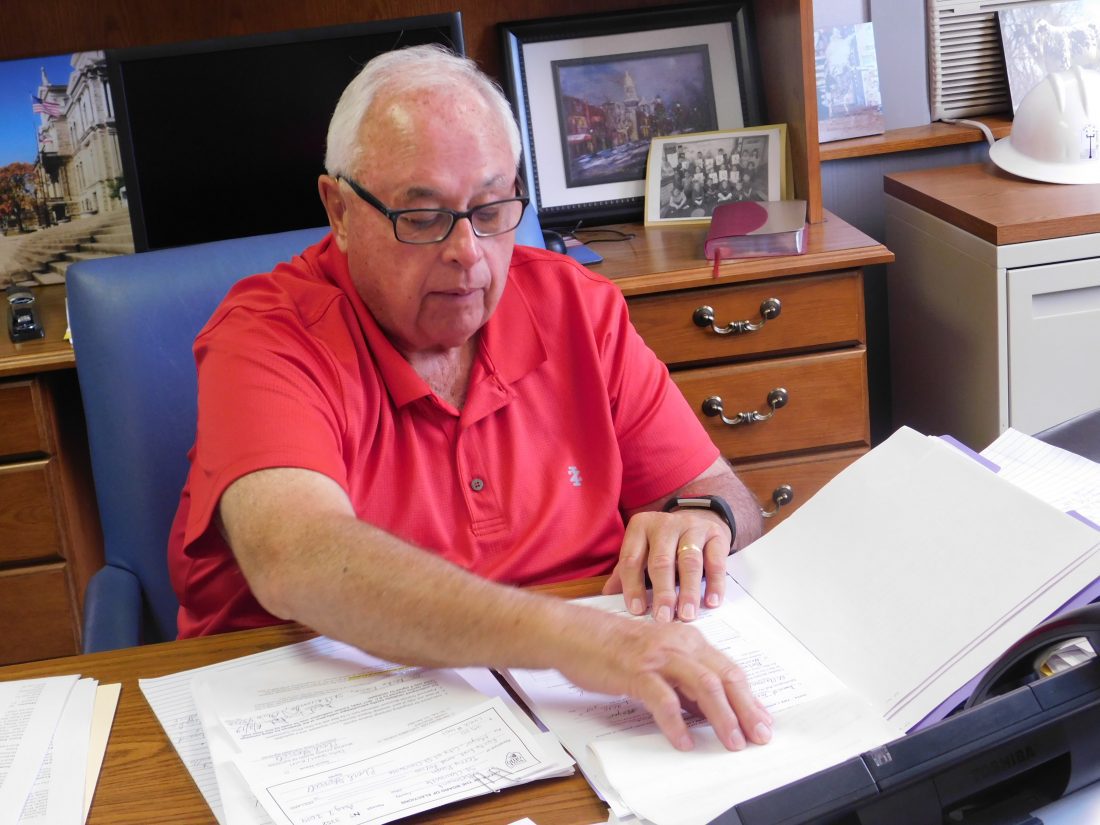 T-L Photo/ROBERT A. DEFRANK St. Clairsville Mayor Terry Pugh fills out his paperwork for the upcoming election again, after the board of elections did not certify his candidacy due to an incorrect date. Several candidates are seeking the mayoral seat on Election Day in November.

ST. CLAIRSVILLE — The upcoming mayoral race will have multiple challengers, but the incumbent may not be on the ballot.

Monday’s meeting of the Belmont County Board of Elections saw three contenders for St. Clairsville’s mayor approved for candidacy on the ballot. However, incumbent Terry Pugh’s application rejected because of an incorrect date on the paperwork.

“The board met to certify petitions last night and his petition was not certified,” Director Kelly McCabe said. “It’s our understanding that he’s going to ask for a reconsideration hearing. The board will set that hearing when he requests one. … The statement of candidacy had a date in it that was incorrect.”

McCabe said the board would set a hearing date. She added that the deadline for submitting a candidacy statement was Aug. 7.

Pugh was in his office Tuesday to re-file his paperwork. He said the mistake was in listing the end of his term as Jan. 1 rather than Dec. 31, the day prior. He said he had filled out the paperwork no differently than he had during prior campaigns.

“When I ran for president of council and mayor before (and as a city councilman), that’s been over the last 10 years I’ve held three offices. Every time I filled out the paperwork, I filled it out the same,” he said, adding that he had not considered an elected official’s term over until the next official’s swearing-in after the first of the year.

He added that he is collecting prior nominating petitions, council meeting minutes where he was sworn in after the first of the year, and instructions from the board of elections.

“This caught me off-guard. I’ve done it the way they’ve told me to do it for 10 years,” he said. “The term doesn’t expire until somebody is sworn in. … I’m upset. I’ve been doing it the same way and there has never been a conflict before, I don’t know what brought one up now, and again, no one put it in writing…The first time I ran for office I asked ‘How do you fill this out?’ This is how I was told.”

Pugh added that he hoped to have a hearing at the board of elections next week.

“I’d like this hearing as soon as possible,” he said.

McCabe did not comment if there had been any changes in state or local procedures.

“The board members look at the laws that apply to petitions when they’re checking the petitions. That’s what they go by, then they make their decision, and that’s what happened,” she said. “They use the laws, they use the manual, and they check the petition.”

She did not have the section of the Ohio Revised Code specifying candidacy nomination procedures at hand.

The past months have seen several contentious meetings among city leaders and residents. The chief issue dividing council members and residents is the ongoing debate centering on the future of water and wastewater service. A bid from Aqua Ohio to purchase the aging system is being reviewed.

Currently, candidates approved to be on the ballot Election Day Nov. 4 are Tim Porter, Bill Brooks and Kathryn Thalman. All have featured in public conflicts with the city administration.

Brooks is a vocal opponent of privatization and has helped organize rallies in opposition. He is also mentioned in the suit as someone allegedly approached by another accused councilman, Perry Basile, who allegedly attempted to persuade Brooks to disseminate the draft report to the public. Brooks reportedly refused.

Porter is the current president of council. He has clashed with Pugh in the past, and Pugh has accused him leaking information on an investigation of Police Chief Jeff Henry’s job performance. Henry, who was cleared of any wrongdoing, has since filed suit against the city and several of its leaders and residents for allegedly releasing a draft of the report. Porter is one of the defendants named in the suit.

Thalman is another resident who has voice doubts about the prospect of privatization and the draft of Aqua Ohio’s bid. She, Brooks, Pugh and Porter were on a committee formed to evaluate the bid before it was placed before council. The board was dissolved after several unproductive meetings marked by character attacks and mistrust, with Brooks saying he believed the board was “stacked” to obtain a recommendation in favor of privatization and Pugh saying he believed Brooks had only joined the committee to obstruct. Thalman has since participated in rallies against privatization.