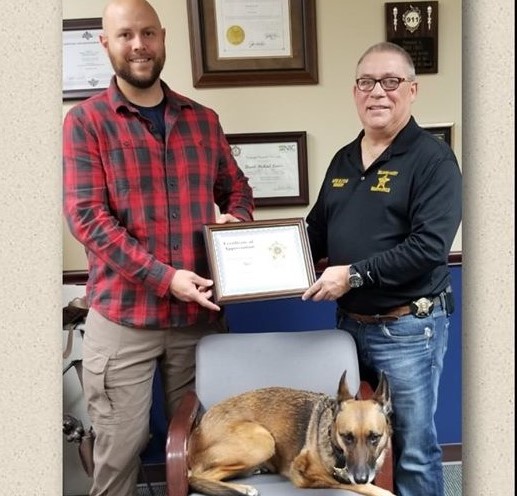 On behalf of the sheriff’s office, Sheriff David M. Lucas presented K-9 Deputy Hyra and her handler, Deputy Brian Carpenter, a “Certificate of Appreciation” following the dog’s retirement last week. The certificate thanked Hyra for her years of service.

“She was a very, very good dog,” Lucas said.

Hyra is approximately 7 or 8 years old and has been with the sheriff’s office for nearly five years, Lucas said. Prior to her retirement, Hyra was one of four K-9 officers with the BCSO.

“Deputy Brian Carpenter, along with Hyra, put several years in the Criminal Interdiction Unit of the Major Crimes Unit; and they handled a lot of felony cases over the years that ended up with convictions,” Lucas said.

“So of the years of service and dedication, in what Hyra did, it was decided that it was time for her to retire — she earned her retirement, like we all do.”

Carpenter was one of three deputies in the office’s Criminal Interdiction Unit. Along with the handlers, the unit is comprised of Hyra and two other K-9 deputies. The dogs are trained to notify their handlers when the scent of suspected illegal drugs is present.

Carpenter recently transferred to the Guernsey County Sheriff’s Office, which was a factor in retiring Hyra, Lucas said.

“Because of the years of service with her (Hyra’s) handler (Carpenter), it was decided that we were just going to go ahead and retire her,” he said.

Lucas said various factors can contribute in deciding when a K-9 retires from the force – it can depend on the dog’s age, years of service and medical conditions.

Under the law, when a K-9 officer is retired, the handler is allowed to purchase the dog for $1 — which is exactly what Carpenter did, Lucas said.

Three deputies remain a part of the sheriff’s office: Copper, Xyrem and Tuco. Copper and Xyrem are drug and apprehension specialists, while Tuco is trained for detecting bombs and explosives.