Special to The Times Leader 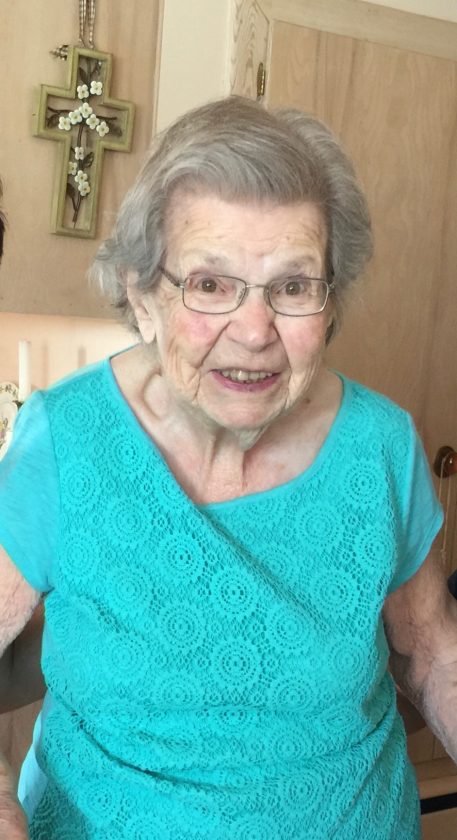 Helen Anstead shares her 106-year-old smile at her birthday celebration in August 2019. She says spreading hope and encouraging each other are vital during this pandemic.

SHE WAS 5 years old in October 1918 when the Spanish flu hit America hard. She watched and prayed through that pandemic, as she watches and prays now, at age “106 and three-quarters” from her Lincoln, Michigan, farmhouse.

Helen Anstead has been through a lot of life, and she knows we can get through this pandemic if we build each other up and believe in what she calls the God of hope.

She said that the World War I veterans who were stationed in Spain in 1918 came back to the United States and brought the deadly influenza virus with them, which then spread throughout the country.

Through it all, though, Anstead and her family remained unscathed.

“I remember that the people were fearful, like they are now,” Anstead recalled of the 1918 pandemic.

Anstead will be 107 on Aug. 9. As a member of a population that’s vulnerable due to the current COVID-19 outbreak, Anstead has been overwhelmed with the kindness from friends, neighbors and family as they look out for her well-being and health.

Her son, Paul Anstead, takes care of the farm where she lives, checks on her regularly, and brings her groceries. She receives many phone calls from friends and neighbors making sure she is doing all right.

It all contributes to the reasons why she believes people become more kind during pandemics, both then and now.

“I guess they realized that life is short,” Anstead said. “There’s no use being angry.”

Anstead lived through the 1930s, seeing many devastating effects of the Great Depression, as well as the crippling disease polio, also known as infantile paralysis.

“It was called infantile paralysis, because when little children got it, people were just so afraid that their small child, if they survived it, would be paralyzed,” Anstead said.

Anstead said polio affected people differently, paralyzing small parts of the body for some, like the woman she knew who had to eat only applesauce because her throat was paralyzed. Another woman wore braces, like many seen in old photographs.

“She got it when she was 3 years old,” Anstead recounted. “She was only paralyzed from the elbow down, but she could move her arms, so with a brace on, she could manage both arms and both legs.”

During the Great Depression, Anstead’s father had an office job, which he kept, so her family had a stable income while others suffered.

She grew up in a steel mill town in Pennsylvania, near Pittsburgh, Ellwood City, on the western border of the state near Ohio.

“It was hard,” Anstead said of the Great Depression. “People didn’t have jobs, and they had families. And then there were government programs that would help out.”

She moved to Michigan when she married Russell Anstead in 1947.

She has three children, Paul Anstead of Lincoln, Michigan, John Anstead of Cleveland, Ohio, and Helen Margaret Hillman of Grand Blanc, Michigan. She has five grandchildren and two great-grandchildren.

Having been through so much life that most only know from studying history, Anstead is confident that we will develop a vaccine for COVID-19, and that we will make it through this moment in history as well.

She said we must be hopeful, “so people don’t get depressed from their situation. And we can keep helping each other, physically and mentally, encouraging people so that they don’t get depressed and even commit suicide because they think life’s not worth living.”

Relying on God’s love for us is an important part of that hope, she argued.

“The Creator wants to offer us His peace, and if you accept it, you’re not so worried about things,” she noted.

She added that abiding by social distancing practices right now is the best way to ensure that a body stays healthy, but being sure to connect with others is the quintessential way to keep a healthy mind.

“We just have to keep building each other up,” Anstead said. “As a nation we will survive.”