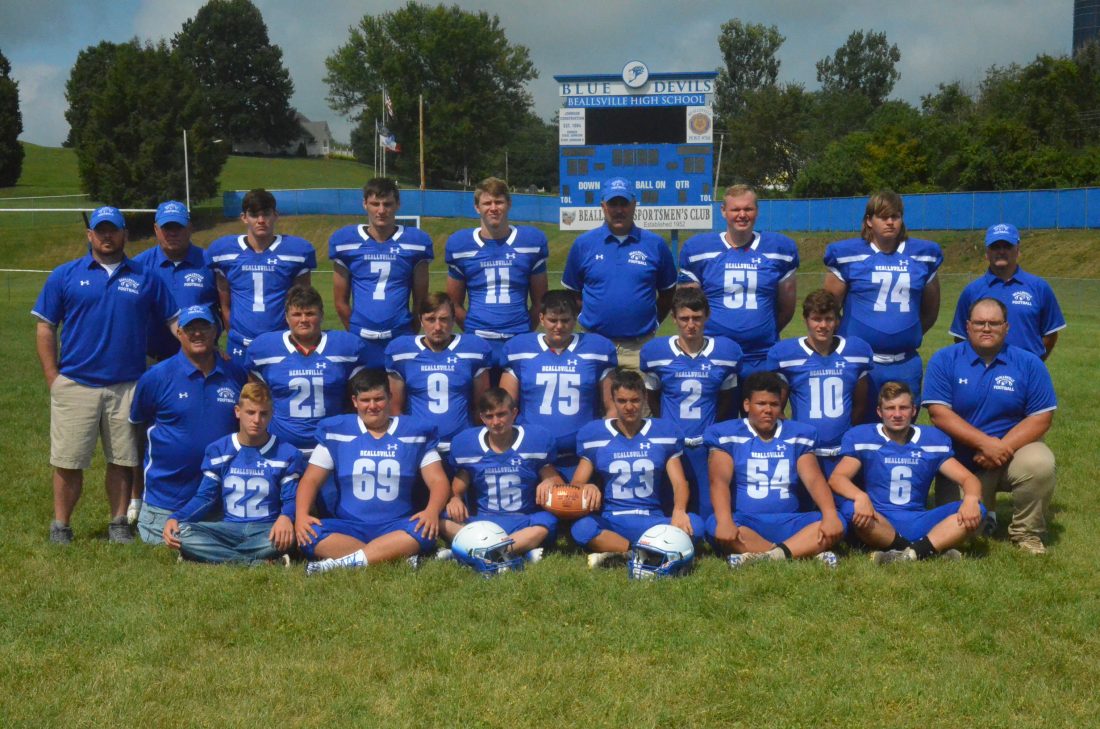 BEALLSVILLE — Numbers are low but expectations are high at Beallsville.

Rusty Lucas takes over the Blue Devil grid reins this fall. He succeeds Larry Deem who did a masterful job of keeping the program afloat for four seasons.

Lucas has just 15 gridders to work with. However, a lack of bodies does nothing to dampen his enthusiasm or goals for the coming season.

“I want to win the OVAC this year. Simple as that,” Lucas said. “Everytime we step on the field I expect to win even if we are playing Steubenville. That is just the way I am.”

The Beallsville grad inherits a team that went 1-9 last fall. That single “W” came against Hundred.

Lucas was a former assistant for legendary Blue Devil and Hall of Fame grid boss Dave Caldwell. He says he has relied upon his former boss in making the transition from assistant to head coach.

“I found out really quick that things are much different as a head coach. There is so much more responsibility,” Lucas said. “There is a lot of multi-tasking that goes with being the head coach and much more to do than people realize.

“I have reached out to Dave for some input and guidance since taking over. He has been a big help,” he added. “We will use some of the things he used to do that were so successful.”

While quantity is in short supply at Beallsville, quality is certainly not.

Dakota Phillips (6-0, 180) returns to trigger the Beallsville attack at quarterback. The multi-talented senior is a dual threat as he possesses a strong and accurate arm to go with a deft ability to run.

“Dakota is a talented player. He is a dual threat and is picking up our new system quite well,” Lucas offered.

Phillips will be complemented by two quality running backs.

Wyatt Brown (5-11, 225) is the hammer in the running game. The tough-minded senior picks up the tough yardage inside while also being an effective lead blocker for Moore.

Sophomore Brad Moates (5-5, 135) is also ticketed for time in the backfield.

Lucas has a good news/bad new situation on the offensive line. He has a quality and talented group. However, he currently only has five linemen.

The front in anchored by Spencer Jarrett (6-1, 260). The rugged senior will again be at tackle. He has been a stalwart from day one and is in line for post-season honors.

The other tackle will be junior Garrett Schafer (6-0, 230), giving Lucas a solid tandem.

The Blue Devils’ O-line will be a point of strength this fall if all five starters can avoid injury.

Lucas has a nice situation at tight end where two talented performers reside. Steven Yingling (6-0, 170) is ticketed for starting duty. Lucas, however, is pondering the possibility of using the versatile senior along the front line to ease a manpower shortage.

Should Yingling see duty on the line, Kollin Ludwig (5-9, 150) will be the regular tight end. The speedy senior will also get time at tailback and wideout when the need arises.

Lucas likes his wide receivers with senior James Schnegg (5-9, 160) and sophomore Brandon Louden (6-1, 160) manning the starting spots. They both possess good speed, according to Lucas.

Jarrett and Moore will be the ends. Steck will provide depth.

Schafer and Perkins will be the run-stuffers at defensive tackle while Moates is a cat-quick nose guard.

Brown is the Blue Devils’ middle linebacker while Phillips and Schnegg provide outstanding athleticism as the outside linebackers. Stephens will offer back-up help.

Ludwig and Louden are a solid pair at cornerback while Nally roams the deep zones as safety.

Phillips will do the placekicking while Brown is the punter.

“I know our numbers are low but I think we are going to surprise some people. This is a different team,” Lucas said. “The kids are taking to our coaching really well and helping each other out. This system works. It is a timing offense. The kids are buying into it. We have a lot of smart kids on this team

“The kids are very upbeat and working hard,” he added. “The coaches are doing a great job of teaching. We have a real positive atmosphere. We will take it one game at a time. If we can stay healthy then I believe good things will happen.”

Thanks to the efforts of longtime athletics director Delmas Moore, the Blue Devils will face a workable schedule. Gone are the back-breakers such as Linsly School, Wheeling Central and Ohio small-school juggernaut Marion Local.

Toronto looms as the biggest test on this year’s Blue Devil card.

Beallsville opens its campaign this Friday night with a road trip to Hemlock Miller. The Big Blue’s home opener comes in Week 2 when Frontier comes calling.

Lucas put his charges through a trio of scrimmages, including Strasburg, Wirt County and Wahama.

“I can’t thank our school board, principal and athletic director for their great support. They have done a tremendous job with upgrading our facilities,” Lucas said. “I believe our football facility is as good as any D-VII program in the state.”