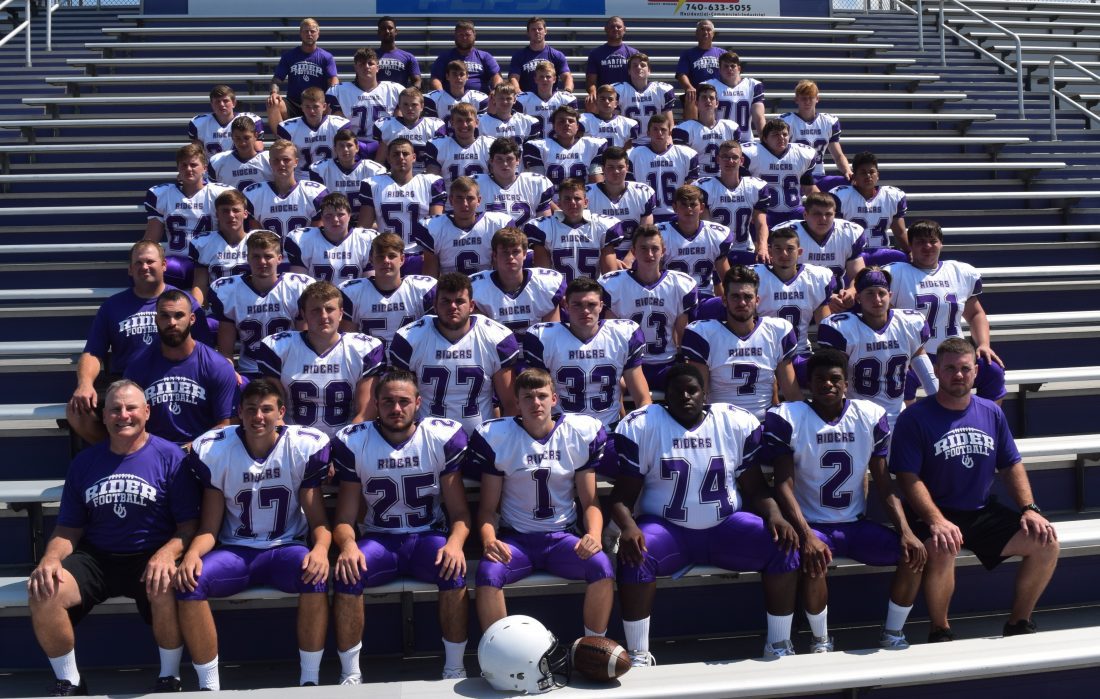 As is the norm in the Purple City, expectations are high as nearly 50 players strapped up the chinstraps and laced up their cleats for another season at the Dave Bruney Football Complex. Seventeen of those are returning letterwinners from last year. The team is broken down fairly even grade-wise as it has 10 seniors, a like number of juniors, 13 sophomores and 16 freshmen.

“Our numbers are about where they should be,” Yoder, who replaced legendary Dave Bruney on the Purple sideline last fall. “Of course, every coach would like more players, but we feel we have a good group of kids.”

When asked to use one word to describe what he learned as a first-year head coach, the Martins Ferry alum replied, “Patience. Being thrown in there late a year ago didn’t help and there was a lot of stuff going on, so I think patience was the key. I think the guys picked up more on our system this year just for the fact that the coaches have had a full year to work with them compared to the short time we had last season.

“It’s been a little easier this year because of that.”

Yoder didn’t get started until May when Bruney opted to retire after 40 seasons and 275 victories.

“It was exciting last season, but that was last season and this is this season,” he stressed. “We’ve got a lot of skilled players back and we return three starters on the offensive front.”

When you talk about the Purple Riders’ offense, one fact pops out immediately. For what is believed to be the first time in the history of the storied program which has accumulated an eye-popping 707 career wins, there will be a four-year starter at quarterback.

Senior Jacob Probst (6-1, 190) started under center early on in his freshman campaign. He has never left.

Last season the strong-armed Probst, who also excels in baseball, passed for 1,220 yards and a dozen touchdowns. He also ran for 184 stripes and four more scores.

“That’s saying a lot. To be a two-year quarterback here is a big deal, but he will essentially be a four-year starter,” Yoder said of his seasoned field general. “He took over a couple of games into his freshman season and has been there ever since. He knows the offense. He runs the offense. He had a good camp.

“A lot of his gradual improvement is just understanding the game more,” Yoder noted. “He’s always been physically able to do it. He’s more comfortable this year. He knows what everybody is doing, or is supposed to be doing. It’s like having another coach out there.”

Martins Ferry will employ the same offensive schemes, but there may be some new wrinkles this fall.

“We’re going to be similar to last year, but we should be able to spread teams out a little more,” the Mount Union graduate said. “We’ve got a lot of our skilled position players back and we’ve got some interior linemen that are returning for another season.

“Because of the time spent with the players during the offseason, I think we’ll be able to a lot more things, both offensively and defensively, early on than we were able to last year.”

“Logan will see a lot of time at wideout, but he will see time at quarterback,” Yoder allowed. “Trey is starting to pick it up. He will be our freshman quarterback.”

“Caleb was injured the last part of last year, so we’re lucky to have him back,” Yoder explained. “He’s been having a good camp.”

Before suffering a season-ending injury, Olson ran for 609 yards and scored seven touchdowns on just 63 carries. He also caught a TD pass.

“Trevor has actually started since his freshman year on defense, but he has also had some big games running the ball,” the head coach added. “We’re looking for big things from both of them. Both had explosive games last season.”

Goff will also get his fair share of carries.

All three are returnees.

In addition to Smith at wideout, Probst will have a bevy of receiving possibilities at his disposal.

Senior Dasyn Hores (6-0, 180) returns as the team’s leading pass catcher with 28 receptions for 436 yards and a trio of six-pointers.

“Dasyn was our leading receiver, but we didn’t move Smith to wide receiver until midway through the season, so he’s probably the most improved player at that position now that he has learned it,” Yoder allowed.

“Cody had a good camp and Alex played last year, as did Cole.”

The tight end will be senior Richie McFarland (6-2, 195), who also started there last year.

Yoder is also excited and pleased thus far with what he has seen on the offensive front where seniors Gage Kwiatkowski (6-1, 235) and Donte Lewis (6-2, 245) return at a guard and tackle, respectively. Also back for another season is junior Evan Carpenter (6-2, 210).

“We lost a couple of starters, but we have a couple guys back that started a lot last year,” Yoder continued. “Those three guys will be a big key to our success, both running and the ball and throwing it.

“We need to find another tackle and a center,” he admitted. “We’ve got guys battling there for the starting spot. It’s good competition.”

“Preston will help us this year and Peyton is also in the mix. We’ve got some size on the O-line, but we’ve got more speed,” Yoder noted. “I think having speed is better for us with all the skilled players we have returning. Everyone can run.”

Defensively, the Purple Riders will lineup in a 4-3 scheme that Yoder put in last season.

“We return three starters on the D-line which is huge for us,” he noted, citing McFarland, Lewis and Carpenter. “We have one tackle spot open for now, but we have some kids competing really hard to fill it.”

McFarland and Carpenter will man the ends, with Dobson, Johnny McFarland, Larkins, Collette, Finsley, Bailer and Nagel also penciled in.

Lewis fills one tackle spot, with competition for the other coming from Bruney, Peyton Hores, Kwiatkowski, Meeker, Dagan, Thompson, Baker and Thaman.

The Purple Riders have two returning starters or players who have previously started at linebacker in Caleb Olson and Hanson. They will play on the outside. Duck and Goff will man the middle. Jacob Probst will also see action on the outside.

“We’ve got five guys that can all play that position. That’s a nice luxury to have,” Yoder said with a smile. “All five of them can run, as well.”

The cornerbacks are Dasyn Hores and Cody Olson, who return as starters from last year. Smith is the free safety and, according to Yoder, there are a few players fighting for time at the strong safety.

Yoder is especially excited about his special teams units where talented Cody Olson returns as the placekicker and Jacob probst as the punter.

“Not only is he a really good placekicker, he is a good football player all-around,” Yoder said of his left-footed soccer-style kicker. “He plays wide receiver and cornerback. He’s also the point guard in basketball, so he’s an athlete.”

“Once he gets his legs under him, it should improve. He works really hard on his kicking.”

The Purple Riders schedule is brutal, as always. One assistant coach was heard saying, “this might be the toughest Ferry schedule in the last 20 years.”

“I think the Ohio Valley, as a whole, is going to have a really good year,” Yoder offered. “I think we have a tough schedule. I also think we have the potential to be pretty good, but so do a lot of valley teams, and that’s great. That’s great for competition and, hopefully, a lot of us get the opportunity to play in the postseason because of that.”

For the first time since 2013, Martins Ferry won’t open against Buckeye Local as the Purple Riders debut at Shadyside Friday night. That year it hosted Taylor Allderdice in the season-opener.

Week 2 also has a newcomer in The Linsly School, which replaces Nelsonville York.

The remainder of the schedule consists of Buckeye 8 contests, with the exception of Wheeling Central in Week 8.

“I know the Buckeye 8 is going to be tough. Every team seems to have its best senior class, but, again, that makes for good competition and should create some very good games,” he offered. “Our non-conference games are just as tough. I think that will make them mean more to the kids.”

The coaching staff remains intact from a season.

“It’s basically the same staff as last year,” Yoder noted. “They know the system and have been coaching the kids up really hard. They put a lot of time in. We want to improve from what we did a year ago. That’s where it starts,” he said. “We want to get off to a strong start. All of our preparation right now is for week 1.”

Martins Ferry is one of seven Ohio schools to record at least 700 all-time victories. It has 707. Massillon Wasgington leads the way with 8885, with Canton McKinley second at 837. Steubenville has 815, followed by Martins Ferry. Cleveland St. Ignatius (702), Cincinnati Wyoming (701) and Warren G. Harding (700) round out the elite list. Dover checks in at 696.