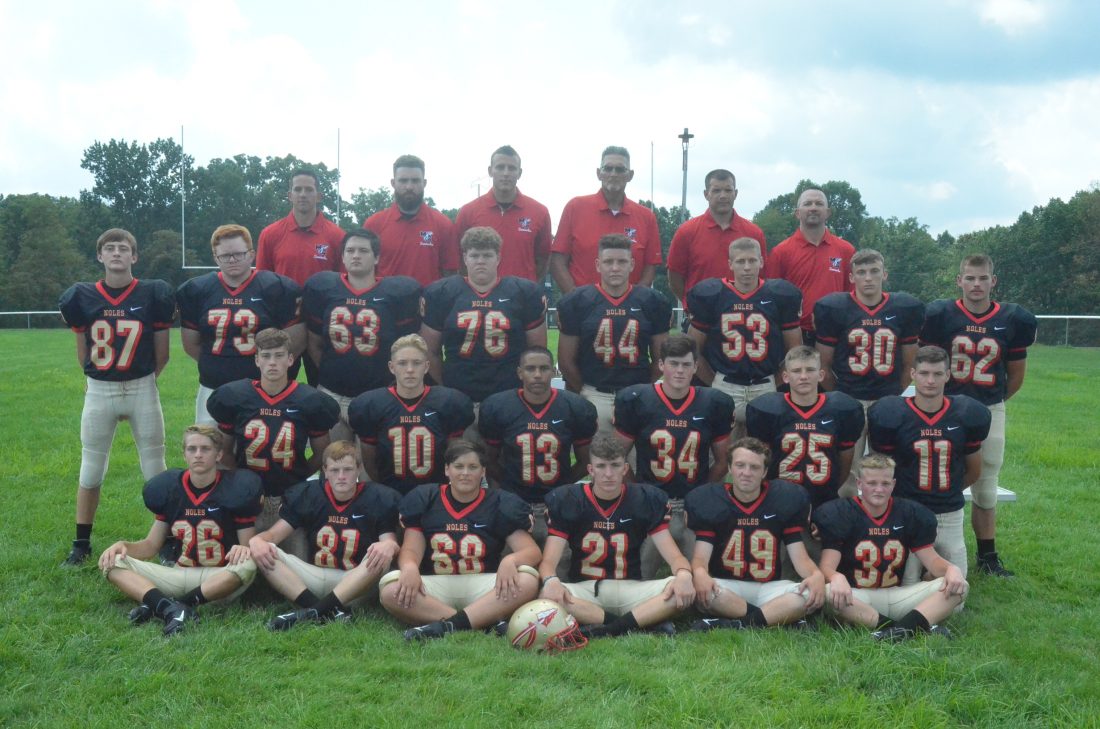 They depend on many variables.

At Monroe Central, although they aren’t yet written in stone, second-year head coach Josh Ischy believes his team’s aims are quite different than a year ago.

“Last year, our goal was to be competitive, to get better,” he said. “They were more intangible.

“In talking to these seniors, I think win-loss is more on their minds than last year, where there were just so many unknowns.”

Yes, 2018 was a transitional season for the Seminoles.

And, it started at the top.

Jay Circosta stepped down in May after 47 years as the program’s leader and its compass. Ischy, who played for Circosta and coached under him for a decade, was handed the reins not long after the Ohio and OVAC Hall of Famer’s retirement in May.

But even though he’d been in the program for a while, there was a still a learning curve. He hadn’t been a head coach and hadn’t dealt with all the tasks a head coach tends to.

Now, with a year under his belt, Ischy said the comfort level is better and he’s ready to go.

“Having a whole year (as head coach) I can set things up and have my spin on things more,” he said. “This year, I kind of know what’s coming. I know what I need to do and what I can change.”

Cirscosta still pops in every so often, and Ischy welcomes his input and advice.

“It gives me a soundboard to bounce ideas off of,” he said. “We get to talk about a lot of things.”

Making Ischy’s transition to the head job go more smoothly was the fact most of Circosta’s staff made the transition with him. Entering this fall, those minds are still in place — John Ischy, John Speelman, Curtis Nixon, Kole Hogue and Mike Jones. Brian Longwell, a former Seminole and son of longtime booster Don Longwell, joins the staff in place of Jon Perkins, who stepped away to focus more on his boys’ basketball program.

“These guys have assisted multiple years, so they know what the expectations are, not just with wins and losses, but on how we carry ourselves, how we practice and the preparation we put in.

“That’s always good when you don’t have to lay the groundwork for the culture. You come in and the culture is already there. All you have to do is solidify it a little bit.

“I think everyone on the staff wants to return to the heyday of what Monroe Central should be, can be and what we feel it should be. That’s refreshing.”

Ischy remains the offensive coordinator, a job he took on while serving with Circosta. While he said it was challenging last season adding head coaching duties into the mix, he remains committed to calling plays for the foreseeable future.

“It would be hard for someone to take that job away from me right now,” he smiled. “As of right now, I’m young enough and have enough energy that I’m willing to (take both jobs) on. And, my wife is forgiving enough and realizes weekends aren’t really off days. Those are days that I’m gonna be sitting down and analyzing film.”

Ischy is eager to do that, and eager to see how his team improves on its 2-8 record from a season ago.

Monroe Central won its last two games — against Frontier and West Muskingum — capping a season that saw the Seminoles improve each week out. Ischy acknowledged there were many growing pains, but he’s confident having so many young players in key spots will reap rewards soon enough.

“This is an outstanding group to work with,” Ischy said of the varsity group, which numbers 20. “I’ve been really pleased.

“We averaged 12 to 15 players in the weight room during the offseason which, for having 20 players, is a high percentage.”

The Seminoles open the season at home Friday vs. Union Local at a field that has some new bleachers and a new press box. A three-game road trip follows, with stops at Martins Ferry (vs. Bridgeport) and River and Caldwell.

Monroe Central returns home Sept. 27 against Fort Frye before returning to the road the following week against Magnolia. Three of the final four games are at home, including the season finale vs. Shadyside.

The tilt against the rival Tigers replaces West Muskingum on the card. Monroe Central and Shadyside have played in Week 2 for many years. That spot is now taken by the Bulldogs.

This season also marks Monroe Central’s last against a PVC slate. The school moves to a Mid-Ohio Valley League schedule in 2020. The Seminoles will also pick up Buckeye Local.

Ischy hopes the program’s numbers improve as the team moves into the new league. Seven years ago, 42 players donned Seminole gear and numbers have dwindled steadily since. Ischy sees initiatives being made he hopes will increase participation.

“We’re adding flag football in our community and that’s good,” he said. “In other communities that have done that they’ve upped their numbers and they credit that to flag football.”

Monroe Central had many young players at key positions in 2018 and the inexperience showed a lot throughout the season on both sides of the ball.

“Sometimes, we just looked very underdeveloped and immature physically,” Ischy said. “This year, I don’t think we can say that because when we went to different places — 7 on 7s or the Big Cat Lineman Challenge (in Shadyside) we didn’t look like we didn’t belong.”

Plus, Ischy said his team’s “football IQ” has improved.

“If it was good last year, I think it’s better this year,” he said. “We played a lot of underclassmen. I have eight guys returning on offense and nine on defense.”

Leading the way on offense is sophomore quarterback Malachi Rose-Burton (5-10, 165). Burton showed flashes last fall and Ischy said he’s on his way to being the complete package.

“Last year, he showcased his raw, athletic ability,” he said. “This year’s he’s understanding the offense more. This year, I’ve seen him thinking through things more and our conversations have been a lot more mature.”

Ischy called Burton the best true quarterback he’s had at his disposal since becoming OC.

“When I look at some of the things we’re able to do with our offense this year as opposed to last year, we’re leaps and bounds ahead,” Ischy said, noting the Seminoles didn’t score on 18 red-zone drives last season. “Are where we need to be? No. But I’m much more confident we can get there this year and be a highly-competitive team.”

Junior Alex Kilburn (5-11, 215) returns to anchor the rushing attack after leading the Seminoles in that category last year.

“He’s a tough kid and has played there since he was a freshman,” Ischy said. “We expect some big things out of him. He’ll be our workhorse in carrying the load.”

Three-time letterwinner and senior Wyatt Young (5-10, 160) bolsters a receiving corp looking to replace the production lost by the graduation of Zac Jones.

“We are the deepest at receiver since I’ve been OC,” Ischy noted. “We have a lot of guys that can run and catch and understand the game.”

Cochran will man the middle on the defensive front, with Keylor, Kilburn, Longwell and senior Conner Stimpert (6-0, 235) providing depth.

Cramer returns at middle linebacker, with Babcock, Yonek, Chaplin and Bunning all possibilities there.

Young and Lincoln will man the corner spots, with Hogue and Rose-Burton the safeties.

“Pretty much everyone is going to see playing time at one time or another,” Ischy said.

“This year I feel more comfortable. I feel confident. If we can shore up some things, and that’s a big if, I think we can be competitive in about every game.”