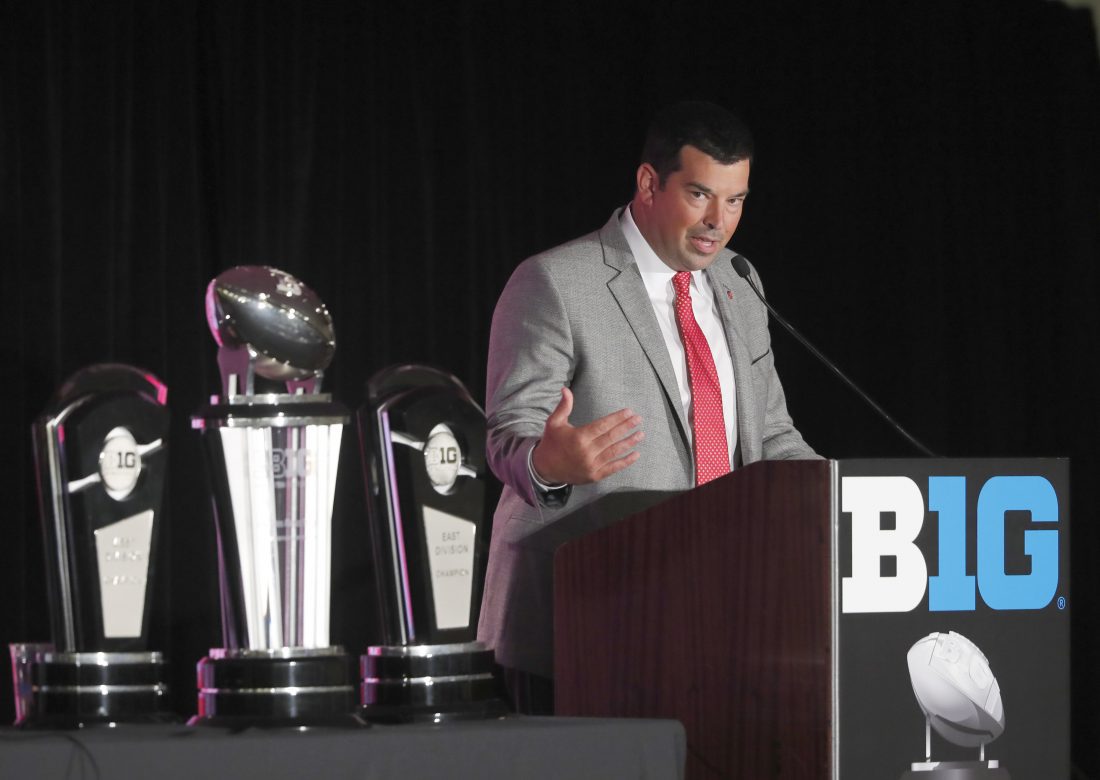 COLUMBUS — All eyes are on Ryan Day as he steps into the role as architect of one of America’s top college football programs.

Day, 40, looked full of vigor and vitality earlier this month as he led Ohio State onto the Scarlet and Gray turf at “The Woody” for the Buckeyes’ first official practice of the year.

He’d been there before.

Last August, Day temporarily held the reins during parts of August and September while then-head coach Urban Meyer sat out due to a school-issued suspension related to the Zach Smith situation. In so doing, Day guided OSU to victories against Oregon State, Rutgers and 15th-ranked TCU.

As he opened camp, Day reflected on his short, but productive tenure as Buckeye boss and said that experience, no question, aided in his preparation for what he’d face in 2019.

“Big time. Big time,” he said as he spoke to reporters following the first workout earlier this month. “Now this is the first time since I’ve become head coach where this is the second time I’ve done something.

“Good to draw upon. Check your notes, things you said. That helps, because, again, it’s not the first time doing it.”

While there were many uncertainties and distractions swirling about “The Woody” last preseason there’s no doubt now this is Day’s team. He officially became Ohio State’s 25th head coach on Jan. 2, but unofficially the night before when Meyer placed the whistle around his neck following the Buckeyes’ victory in the Rose Bowl.

Meyer’s retirement and the subsequent announcement of day’s promotion to head coach took place about a month prior to the Rose Bowl. There, Day credited Meyer for creating something special at OSU and promised to keep the Buckeyes’ tradition of winning alive.

“We are all are part of something special here at Ohio State,” he said. “And the culture that Urban Meyer has created here is strong. My pledge to the players is that our staff is going to give you every opportunity to maximize yourself as a football player and as a student in establishing your career after football.”

Meyer might be gone from the football staff at Ohio State, but his presence certainly isn’t gone from the university. Although he’s taken a job with FOX to be part of its weekly Saturday pregame show, Meyer also accepted an invitation from OSU athletic director Gene Smith to become an associate athletic director at the university. So, he’s still around campus, and continues to be a mentor to Day.

In fact, Meyer has been a steady presence at Ohio State practices this month, something Day encourages.

“He’s been a resource for me, for everybody here,” he said. “Still involved in terms of being part of the university, everything he does there. Right across the street if we need advice. Me, being a first-time head coach, unbelievable resource that way. He’s been great.”

While this is Day’s first head coaching job, he’s hardly a newbie in Columbus.

Day has been on the Ohio State staff since 2017 and, since arriving, has enamored everyone with his offensive knowledge and penchant for getting the best out of the team’s quarterbacks.

Thought by many to be Meyer’s replacement, if Meyer ever decided to move on, Day’s head-coaching chops were applauded during his interim stint last September. And when he stepped back into his OC role, the wins kept coming as the Buckeyes won a Big Ten title and scored 40 or more points five times the rest of the season, including the last two games of the regular season and the Big Ten title game.

The Buckeyes finished 13-1, with the lone blemish a crushing 49-20 loss at Purdue before a national TV audience that, ultimately, kept the Buckeyes out of the College Football Playoff.

Ohio State’s non-conference slate in 2019 isn’t as daunting as last year’s — there’s no TCU on it — and all of those games will take place in the friendly confines of Ohio Stadium.

The Buckeyes open Saturday vs. Florida Atlantic before welcoming Cincinnati and former OSU player and coach Luke Fickell the week after. Ohio State opens Big Ten play at Indiana on Sept. 14 before returning home the following week to close out the non-conference portion of its schedule against in-state foe Miami.

The meat of the conference slate begins a week later with a road trip to Nebraska, followed by a home game vs. Michigan State. Following a bye week, the Buckeyes visit Northwestern. That’s followed by a home date against Wisconsin.

The final month of the season sees games against Maryland, Rutgers, Penn State and the season finale at rival Michigan.

Head coach Jim Harbaugh’s charges return 13 starters from a 10-3 squad and that was enough for the media to give the Wolverines the nod in the Big Ten East, with Ohio State second. The preseason coaches poll has Ohio State fifth, with Michigan seventh.

The Wolverines’ coaching staff will have a different look to it this fall after Day plucked two of Harbaugh’s defensive minds in the offseason — Greg Mattison and Al Washington. Mattison is Ohio State’s co-defensive coordinator, while Washington is in charge of linebackers. Day and Washington worked together at Boston College.

“I’ve known Coach Day and know the program and tradition, but my mom and dad are 20 minutes away,” Washington said when he was introduced earlier this year. “I’ve got a 3-year-old, a 1-year-old. My wife went here. A lot of who I am is from obviously the 614 and Columbus and my father playing here. I think those things definitely were major contributors to coming, that unique blend of everything.”

“I am really excited with this foundation of coaches who will mentor, coach and prepare in all areas the young men in our program,” Day said earlier this year. “I am obviously very comfortable with the coaches who have been here and helped us win consecutive Big Ten championships and bowl games, and I am thrilled they want to continue to help this program pursue championships and achievements.

“I am also confident the new assistant coaches will make an immediate impact on this program. I’m really looking forward to working with this staff these next couple months shaping the program and developing our players for the 2019 season.”

Day’s staff will be tasked with tutoring players asked to replace the production of the 19 letterwinners and nine starters lost. OSU had nine players selected in April’s NFL draft, while four more signed free agent deals.

A Heisman Trophy finalist, Haskins, who sat behind J.T. Barrett his first two seasons, was the Big 10 Offensive Player of the Year.

That set the stage for the spring game, where Fields and Matthew Baldwin (6-3, 200), a four-star prospect from Texas, got most of the snaps.

Although Day said at his Aug. 14 presser that no final decision has been made about the starter, all signs point to Fields being under center when the Buckeyes take the field Saturday.

“The guys are competing really, really well,” Day told reporters. “I think, you know, Justin is practicing at a high level now and had a nice couple really good days here.

“I think the guys are getting more and more reps under their belt. “I do think Justin has taken a stride the last couple of days and last week. He’s moving the team nicely. Taking care of the ball better. Throwing the ball on time. Improvement’s there and leadership is improving.”

Former West Virginia quarterback Chris Chugunov (6-1, 203), who had two starts for the Mountaineers in 2017, figures into the mix, too. As camp has moved along, Day said his confidence in the QBs as a unite has grown.

“He had a sprained ankle,” Day said of Chugunov, “so he missed a couple of practices. but yeah, he’s battling. He wants to play. He’s not here just to kind of just take up a spot. I think his leadership’s been good. He’s been throwing the ball well, and I’ve been impressed with his approach and how he came into this camp.”

As camp began, Day said Dobbins appeared to be locked in.

“Seems to me like he’s very serious right now,” Day said as camp opened. “I believe he lost 4 percent body fat when you look at him, which is significant. That means he really worked hard this summer.”

Others in the mix in the backfield are senior Demario McCall (5-9, 193) and sophomore Master Teague (5-11, 215), who’s been dinged up this preseason. Both combined for just 25 carries last year.

“Chris is practicing right now at a starter level for us,” Day said in reference to Mack fighting preseason injuries. “That’s been good for us.”

The offensive line has been a point of emphasis in the offseason as four starters were lost — Prince (RT), Knox (RG), Jordan (C) and Pridgeon (LG). Junior Thayer Munford (6-6, 310, LT) is the lone returning starter.

“I had a good feeling we would be deep this year and I haven’t bee disappointed,” Studrawa said. “I have four tackles that could start anywhere in this league … (they’re) as good as ever. We’re building the depth to where it should be.”

“The thing that I know what we are going to do is we are going to be an aggressive defense that runs to the football and everybody on our defense believes that, and that’s why I’m so proud of these kids right now,” Mattison said during the middle of preseason workouts.