Union Local wants to take the next step 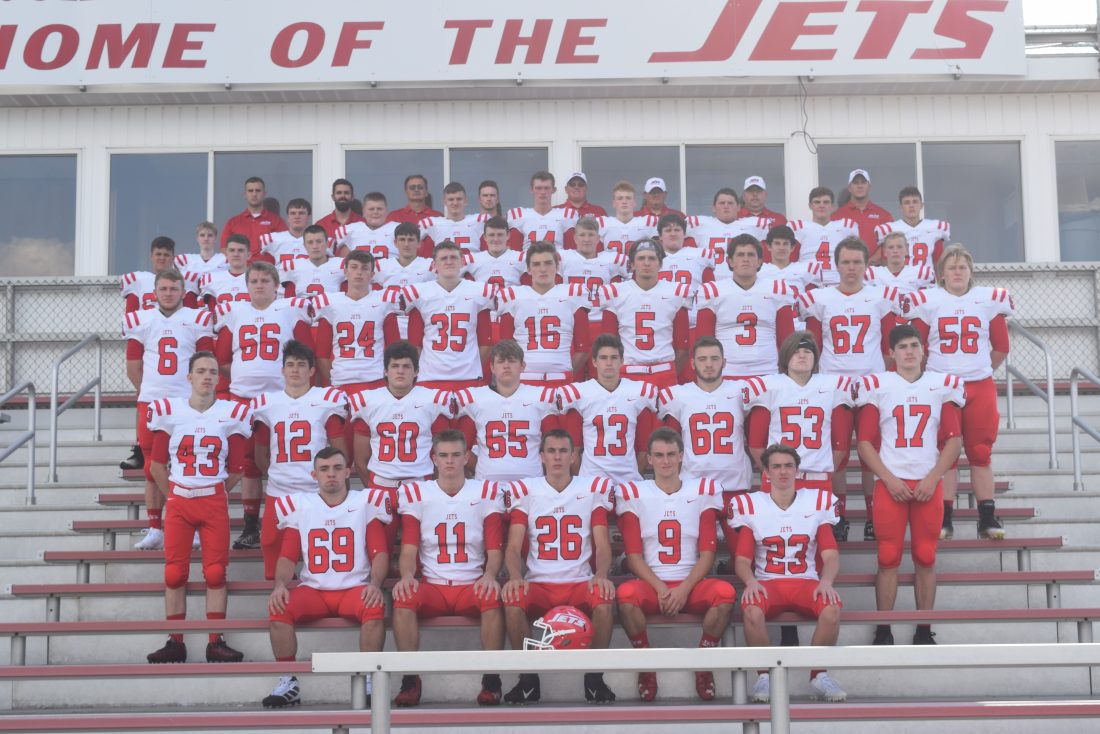 Bernie Thompson agrees with that philosophy, but there are times when he wished he didn’t.

As it pertains to himself, Thompson is totally on board with the idea as he prepares for his second season at the helm of the Union Local football program.

As it pertains to his roster, however, Thompson isn’t as much of a believer. He’s coaching a squad of 44, but only 13 are in the upper two grades.

First things first. Thompson believes he enters this season much more prepared for the task at hand of running a high school football program.

“I’ve been around (football) a long time, but you can’t fully understand what goes into something until you’ve been through it,” Thompson admitted. “Last year, was an eye-opening, learning experience for me. It wasn’t as much the on-field coaching, but everything else that goes into being the head coach.”

Thompson guided the Jets to a 3-7 record, which included a five-game skid to end the season. Thus, Thompson went back to the drawing board and began with himself.

“I feel like I am coming into this season with a way better grasp of everything that needs to be done,” Thompson said. “Having the full offseason certainly helps, too. I am just a lot more confident with everything, which has led to me being more comfortable and feeling more like myself.”

As for the on-field portion of the game, Thompson admitted that things seem to happen much faster when you’re a head coach. He compared it to a player’s perspective when they bump up to varsity from junior high or from high school to college.

“I studied a lot of football and put myself (mentally) into different situations,” Thompson admitted. “There were times I was hesitant with (decisions) and that can’t happen. I really took a hard look at myself and critiqued myself critically.”

Thompson has spent most of the summer and into camp working to get the “blossoming” he’s done as a head coach to trickle down to the players, many of whom will be experiencing a new level of play or at least a position this season.

“The kids have an understanding of what we’re all about, the culture and expectations,” Thompson said. “It doesn’t matter who you are or what grade you’re in. We’re expecting kids to compete and give it their all every play. I am really impressed with these kids’ attitudes and how some of these young kids have stepped up and been much more confident.”

Among Thompson’s evaluations during the offseason was a full review of the 2018 season, which ended with a thud. Union Local scored only 34 points in the second half of the season, while allowing 206.

“Our youth was exposed in certain areas on Friday nights (last season),” Thompson advised. “We know these kids can and will work hard. We have to take the next step to winning games. We don’t want to just be close at halftime or into the second half. We need to take the next step, gain confidence and take control of those games.”

On the offensive side of the ball is where the Jets are faced with filling the most holes. If losing quarterback Cal Kildow, who played in last month’s OVAC All-Star Game, wasn’t enough, throw in the fact that four of the starting offensive linemen are also gone from a season ago.

“We’re going to add a few things (offensively) and really try to play to our players’ strengths,” Thompson said. “Cal was a veteran we could rely on to do a lot of things for us last year, and we gave him some freedom.”

The Jets want “to be balanced” offensively. They basically achieved that last year. They finished with 300 rushing attempts and 245 passes. However, only 20 of those passes and 32 rushes return this season.

The bulk of that belonged to Kildow who passed for 1,250 yards, rushed for 433 yards and accounted for 13 touchdowns.

Again, however, Thompson can’t afford to spend much time worried about who gained their diplomas in May.

“There are going to be some growing pains and it’s going to be a learning experience for a lot of these kids (back), but we’re taking the same approach,” Thompson said.

Thompson and offensive coordinator Anthony Rocchio are planning to “play to the strengths” of their players.

“I love the things we’re doing,” Thompson said. “We’re going to be a little more strict with the gameplan and practice approach and be more intentional with what we’re doing. We need to execute better and we’ve been preaching reps because these young kids, quite simply, haven’t touched the amount of reps they should get.”

It’s been a battle through camp for the duty of replacing Kildow at quarterback. Sophomore Kade Kiser (6-0, 165) and freshman Carter Blake (5-9, 145) have competed for the job.

“Both are great kids who have really good summers,” Thompson said. “I am pleased with both of those guys. It’s been an open competition and they’ve supported each other every day. Whoever doesn’t win the quarterback job will be on the field in another capacity. They’re both talented enough.”

Sophomore Caleb McWhorter (5-6, 150) is expected to take over the primary tailback role. He saw action in all 10 games last season, but had only 13 carries for 71 yards.

Freshman Jackson Price (5-10, 165) will be McWhorter’s complementary back and could see time at fullback.

“That’s a good, one-two punch,” Thompson explained. “Caleb is fast and shifty, whereas Jackson is a physical runner, who can move well.”

A big help to the maturation of the aforementioned quarterbacks should be a veteran and talented group of receivers.

All four of the Jets’ top pass catchers return from a season ago, supplying Thompson — a former receiver himself — with the deepest position on the team.

“We have skill and experience at receiver,” Thompson said. “These guys are the leaders of our offense. They need to gain the proper confidence in everyone else around them, too. They’ve definitely helped the younger kids.”

McWhorter, in spot duty, from the slotback position also caught 19 passes for 121 yards.

Tight end is another position the Jets plan to utilize with a pair of strong targets available. Senior Matt Bateman (6-1, 160) returns after catching 16 passes for 315 yards and 3 touchdowns. Sophomore Dakota Hess (5-11, 180) is expected to take on an expanded role on the offensive side after serving as one of the Jets’ defensive leaders.

“Our strong point will be our skill on offense, but we have four new offensive linemen and potentially, running the ball could be a struggle,” Thompson said. “We will need to be unique with our formations, personnel and play calls, especially until our line can gain some experience.”

The lone returning true starter up front is junior David Burghy (5-9, 185). He will hold down a guard spot. Classmate Claude Romshak (5-9, 170) “played a little bit” at tackle last season and is expected to be there fulltime this season.

From there, however, the Jets are green in the trenches.

“We’re pretty undersized, but I love how hard they’ve been working,” Thompson said. “The weight room has changed these kids and their mentality.”

“There are going to be some growing pains, so it’s going to come down to how quickly we can correct them,” Thompson said about the offensive unit. “We need to be able to cut down the learning curve.”

Junior Parker Skedel (5-10, 150) is back as the kicker. He connected on eight point after tries last season. He will also handle the kickoff duties.

Hess will handle the punting once again.

On the defensive side, not only do the Jets have to replace personnel, but they must also replace their long-time coordinator. Mike Menges has stepped away from coaching football, but Thompson indicated a lot of the same concepts will be utilized.

“We’re going to mimic some of the stuff we’ve done, but we’d like to fly around a little bit more and be more aggressive on defense,” Thompson said. “We’ll be primarily a 4-3 team.”

Union Local’s defensive strength lies with its linebackers. Its top two tacklers return and actually they’ll return — barring something unforeseen — for the next two years, too.

Hess and Smolira led the team with 67 and 59.5 tackles, respectively last season.

“Dakota and Ayden are the leaders of our defense,” Thompson said. “They’re young, but they’re experienced. I am excited about the entire linebacker group.”

Myers is also expected to challenge for significant playing time. Others backers in the mix are Kane Kildow, McRoby, Dominic Burghy and Higgenbotham.

The Jets also boast experience in the defensive backfield. McCort and Bateman will handle the strong and free safety spots, respectively. McWhorter returns at one corner and Morrison will handle the other corner.

“We’re going to rely on the secondary a lot,” Thompson said. “Those guys have stood out in our 7-on-7 scrimmages this summer.”

Loase, Neidert, Gibson and Blake could also contribute in the secondary.

Similar to the offensive side, the Jets’ biggest question marks lie along the defensive line.

Romshak and Porter are ticketed for defensive ends, while Curry and Price are pushing them.

At defensive tackle, David Burghy and Peck are going to get the first opportunity, but they have Clark and Edwards nipping at their heels.

“When you play in the Ohio Valley, you have to stop the run first and foremost,” Thompson said “Tackling has been a struggle for us at times, so we’ve gotten back to some of the basics.”

The Jets will be lining up against a similar schedule as they did last year. The lone change is Weir has been replaced by Cambridge.

“We think (Cambridge) is going to be a way better matchup for us than Weir was,” Thompson said. “We have a ton of respect for Weir, but this is a closer (opponent) and it’s a home game. We’re excited to have picked up Cambridge.”

Thompson believes the Buckeye 8 will once again be a battle week in and week out.

“Overall, it’s going to be a fun year,” Thompson said. “Everyone is kind of in the same boat with so many young teams last year. We’re going to be competing against a lot of good kids and we’ll need to be ready each week.”

Thompson’s coaching staff underwent the aforementioned change with Menges’ retirement. “We love Mike and have a ton of respect for him both as a coach and person,” Thompson said. “I was thankful to have him back (coaching) last year. His son (Luke) is playing at Waynesburg and he wants to spend more time watching him.”

The balance of the staff remains intact from last season and that continuity is something that’s important to Thompson.

“I love our staff and actually I think we’ve gotten stronger and better as a whole because we know each other so well and have spent a year working together,” Thompson said. “I am blessed to have the staff that I do.”